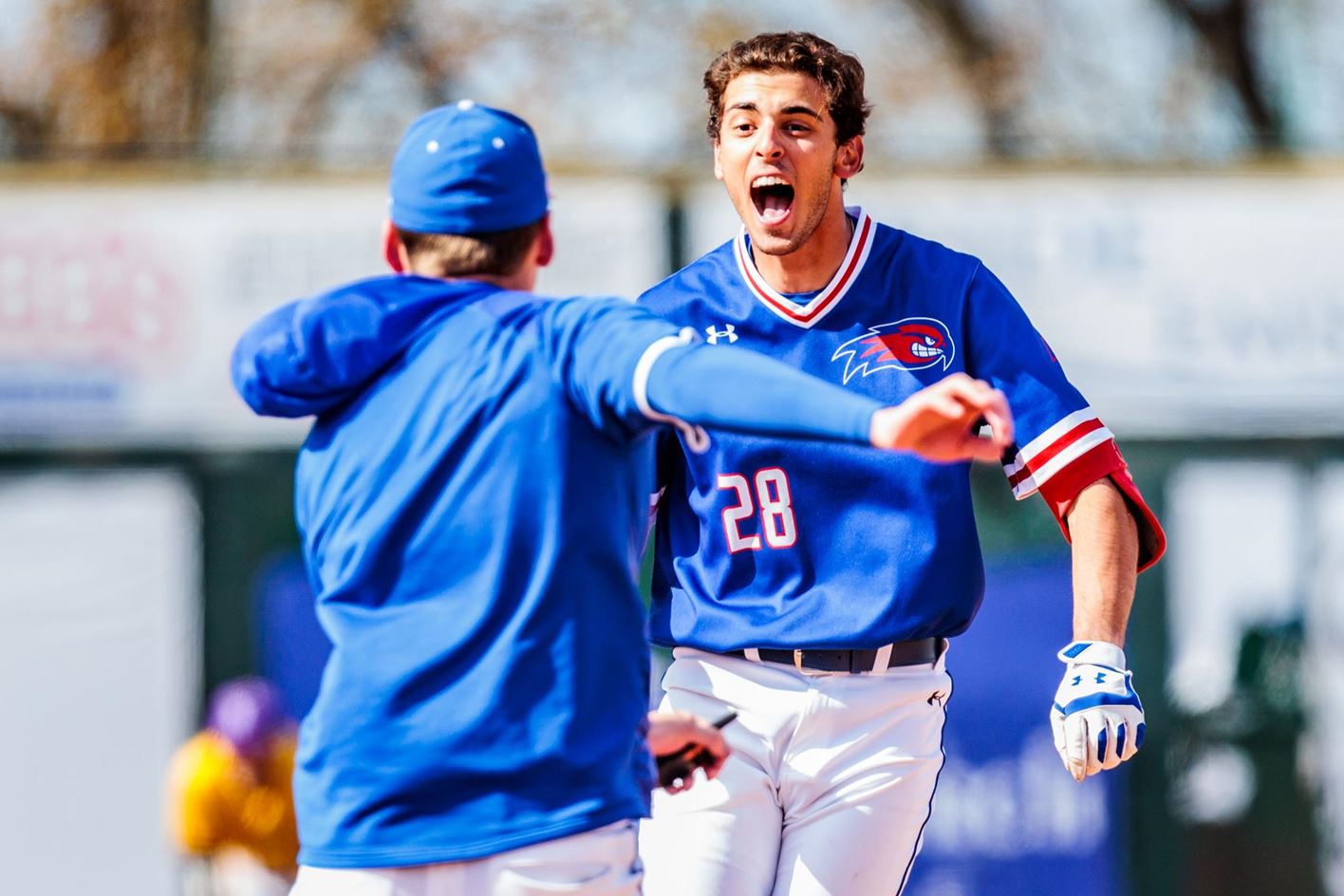 There have been times during this baseball season that UMass Lowell (19-23, 9-11 in AE) has been on the wrong side of these types of games. Saturday afternoon, they were on the right side of a game like this. Gerry Siracusa’s line-drive base hit to center field scored Alex Luccini with the winning run as the River Hawks walked off with a 6-5 victory over UAlbany (18-19, 7-13 in AE). This was a hard-fought game, to say the least. UMass Lowell battled from the first pitch until the end. They come up with a big win which gives them the series and a four-game winning streak. They even survived their coach being tossed for arguing a call at home plate.

Lowell would come back from trailing twice in the game, 2-1 after two innings, then 5-3 after five. The lineup put together quality at-bats that allowed them to tie the game twice before winning the game in the ninth. Coach Ken Harring credited his team for “finding a way to win.” Off of his performance earlier this week against Boston College, Hayden Duke got the start on Saturday afternoon for Lowell. After a quick first inning, Duke ran into trouble in the second. The first two hitters of the inning reached base, John Marti on a walk and John Daly on a single to left. One out later, Jason Bottari singled to right to load the bases. Chris Fisher was then HBP which forced in a run. Josh Loeffler grounded into a fielder choice and the Great Danes had a 2-1 lead.

UAlbany head coach, Jon Mueller, sent Cregg Scherrer to the hill on Saturday. He gave up a first-inning run to the River Hawks on an RBI base hit to center field by Brandon Fish that scored Jacob Humphrey with the game’s first run. He held that lead until the fourth. UAlbany tacked on another run in the fourth vs Ryan Towle who took over for Duke in the third. Duke (2.2 IP, 2ER, 4BB, 2H) had a hard time throwing strikes and would leave after tossing 57 pitches. His mates would get him off the hook and give him a no-decision by tying the game in the fourth with two runs. Robert Gallagher reached on a bad hop base hit over first baseman Will Feil’s head. He would then steal both second and third base. Fritz Genther then walked and moved up to second on a Scherrer wild pitch. With two runners in scoring position, Roddy Hernandez brought them both home on a single to center field to tie the game at 3-3.

Fireworks took place in the visitor’s half of the fifth inning. Marti led it off with a hit to left and the next batter, Daly (2-3, 1 RBI, 2 RS), ripped a double to the right-center field gap that scored Marti all the way from first, 4-3 Albany. The third man in the frame, Will Feil, then singled to right. Humphrey put a hard charge on the ball and came up throwing to home plate. The throw was on a line to catcher Ryan Proto who appeared to slap the tag on Daly before he crossed home plate. Home plate umpire Matthew Kane did not see it that way and called Daly safe. Coach Harring jumped from the dugout to protest, said a few bad words, and was ejected for his troubles. UAlbany now had a 5-3 lead. Scherrer left after six innings (5 H, 3 ER, 3 BB, 6 SO) and UMass Lowell was happy to see him depart. In the seventh vs Chase Carroll, Lowell tied the game again. After getting the first two hitters of the inning. Carroll walked number nine hitter, Luccini. Humphrey (3-5, 2 RS, 1 RBI, 1 SB) then tripled off the wall in left-center missing a home run by inches. The blast scored Luccini to make this a one-run game. Proto then squared one up and drilled a hit to center to score Humphrey. The game was now tied at 5-5.

Towle (3-5) was still on the mound for the River Hawks into the late innings. Afterward, Harring said, “Towle was our MVP today.” He threw 6.1 innings and gave up five hits, three earned runs, three walks, and six strikeouts. He put up zeros from the sixth through the ninth. In the bottom of the ninth, he was rewarded for his effort. Marshall Winn (0-1) was the Great Danes’ third pitcher of the game. After getting the first out of the ninth, he hit Luccini on an 0-2 pitch. Humphrey then singled to left for his third hit of the game. Albany went back to the bullpen for Anthony Germinerio who struck out Proto for the second out in the ninth. Siracusa, on a 0-1 pitch, singled up the middle, and Luccini got a good jump off second base. The throw to the plate by CF Bottari was wide and late. Luccini slid home safely and the River Hawks walked off with a 6-5 victory. The coach was pleased with his team’s ability to come back and win a game late.

On Sunday UMass Lowell goes for the sweep of the series with Joshua Becker on the mound with first pitch set for noon.