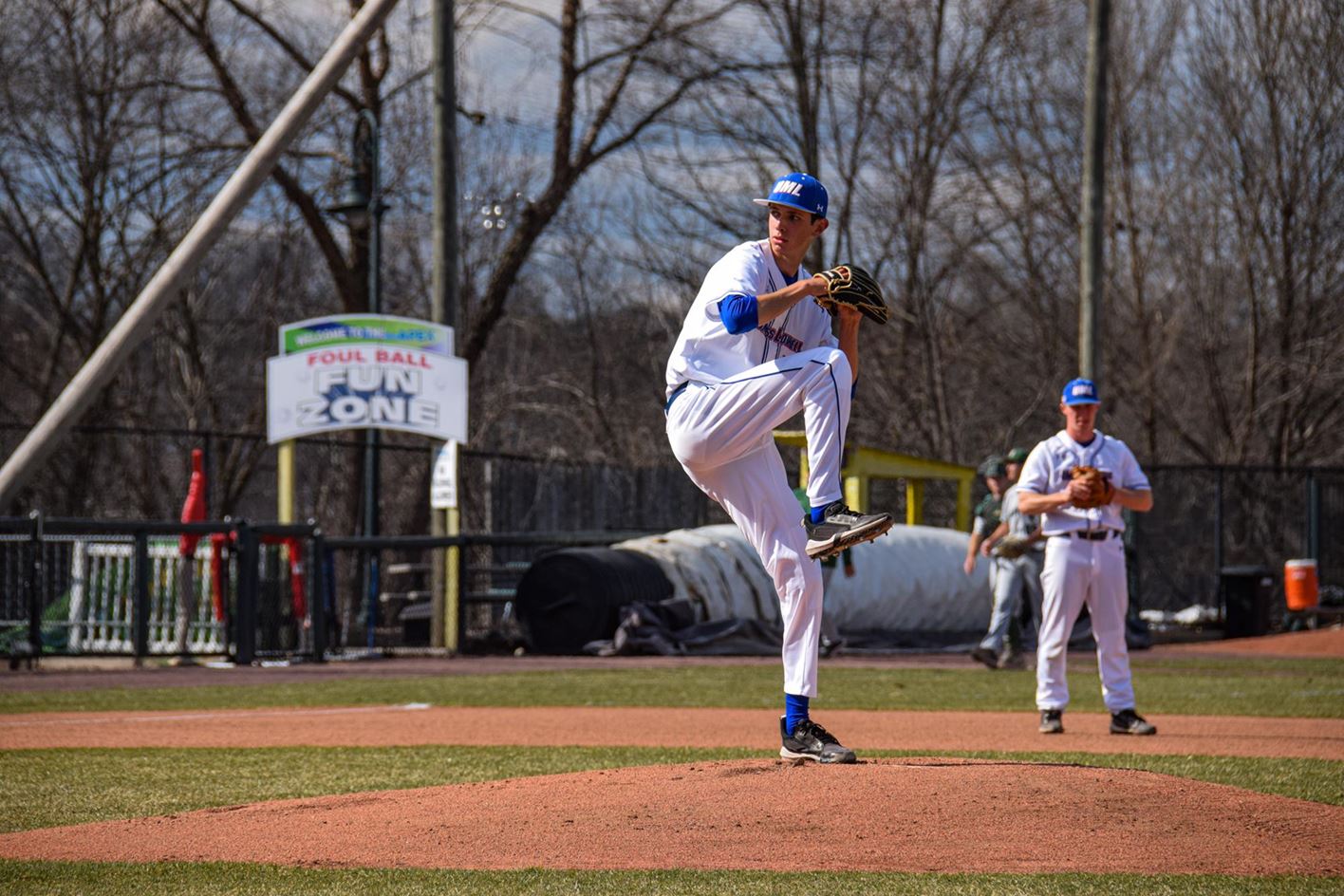 “Any time you get a win, it’s a good day. They got a team that can grind, and they stay in games, so even with the lead I knew it wasn’t a done deal,” said head coach Ken Harring. “Jacob [Humphrey], was on base six times tonight, five steals. This kid is really good and we’re glad he’s on our team.”

Brendan Holland started the game with two strikeouts in the first inning to retire the side in order. The River Hawks opened the scoring in the bottom of the first as Humphrey scored on a sacrifice fly from senior Gerry Siracusa (Kinnelon, N.J.). Holland then struck out another batter in a 1-2-3 second inning.

In the bottom of the second, UMass Lowell extended the lead. Genther opened the frame with a single and then stole second. The sophomore then came in to score after Humphrey was hit by a pitch with the bases loaded, making it a 2-0 game. Senior Robert Gallagher (Mullica Hill, N.J.) then singled to center to score two, stretching the lead to 4-0. Siracusa singled to bring in Humphrey giving the hosts a 5-0 advantage early.

The Warriors responded in the third with a two-run double to cut the lead to 5-2. Genther scored after a single by Fitzgibbons, pushing the lead back to four. Holland continued to pitch well for the River Hawks, recording his fourth strikeout of the night in another 1-2-3 inning. Holland picked up his fifth strikeout of the night in the fifth inning before junior Brian Gaughan (Walpole, Mass.) entered the game. The Warriors hit a two-run home run to make it a 6-5 game heading into the bottom of the fifth.

Siracusa’s sacrifice fly in the fifth brought in Humphrey, who had stolen second and third earlier in the inning, giving the River Hawks a two-run lead. With Gallagher at third and one out, Brandon Fish singled to right to score one more, stretching the lead to 8-5 going into the sixth.

Zach Rodgers took the mound for the sixth, striking out the first two batters he faced. After giving up a single, Rodgers struck out Stadnicki to retire the side. Fitzgibbons was hit by a pitch to start the bottom of the sixth and sophomore Roddy Hernandez (Jersey City, N.J.) reached on a textbook bunt down the first base line, putting two runners on with nobody out. With the bases loaded, Siracusa reached and then advanced to second on an error as Fitzgibbons came in to score, pushing the lead to 9-5 through six.

Zach Fortuna came into the game in the seventh inning in relief of Rodgers. The Warriors added another run off an RBI double, cutting the lead the 9-6. Graduate student Henry Funaro (Lowell, Mass.) took over on the mound to try and get out of the inning. Merrimack scored two more to make it a one-run game once again before Funaro got the strikeout to end the inning.

In the eighth inning, Matt Draper entered the game for the River Hawks and sat the first batter he saw, and forced two flyouts to end the inning. UMass Lowell had the bases loaded in the bottom of the eighth but could not add to the lead. Sal Fusco stepped on the mound for the ninth, looking to close out the game. The senior threw a 1-2-3 inning to secure the 9-8 win for the River Hawks.

The River Hawks take on another in-state rival on Wednesday afternoon with a visit to Amherst, Massachusetts to take on the Minutemen.

“It’s a big one. It’s the in-state, it’s the UMass system. The game means a lot to us as a team and I know it means a lot to them, too. That’s going to be fun going out there and they’ve been playing well, so I know they’ll be ready as well.”

First pitch is scheduled for 3 p.m. at the Earl Lorden Field in Amherst.