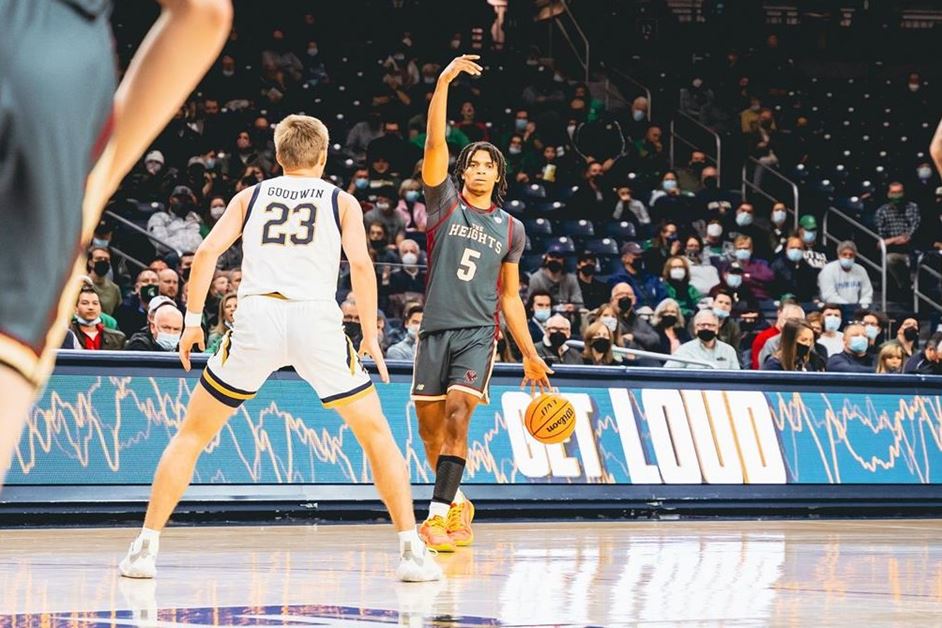 SOUTH BEND, Ind. (AP) Prentiss Hubb scored the last six points for Notre Dame in overtime and the Fighting Irish survived in a 99-95 win over Boston College on Wednesday night to rejoin idle Duke atop the Atlantic Coast Conference after their fifth straight victory.

With Boston College out of big men in overtime, Notre Dame used its size inside with Paul Atkinson Jr. and Nate Laszewski, the duo combining for the first seven Irish points of the extra period. After a 3-pointer by Kanye Jones cut the Irish lead to one with 39 seconds left, Hubb banked in a shot in the paint then stole an inbounds pass and made two more free throws. Makai Ashton-Langford hit a 3-pointer to cut the lead to two with 2.9 seconds remaining but a final foul and two more Hubb free throws sealed the win.

Hubb finished with 13 points and seven rebounds. Dane Goodwin led the Irish (19-7, 12-3) with a season-high 23 points, 18 in the first half. Blake Wesley scored 18 points, Laszewski 16, Atkinson 13, and Cormac Ryan 12. Laszewski, who started the first 23 games of the season, has been working his way back from a leg contusion and doubled his playing time from his last time out, going 32 minutes.

DeMarr Langford led Boston College (9-15, 4-10) with 23 points and seven rebounds. Jaeden Zackery added 18, Ashton-Langford 17, and James Karnik 11 for the Eagles, who nearly pulled off their first season sweep of the Irish in 25 years.

The Eagles, already missing two of their primary big men, had Karnik and little-used 7-footer Justin Vander Baan foul out in regulation. T.J. Bickerstaff, who has 21 starts this season, was out because of a calf injury. Seven-footer Quinten Post, who averages 20 minutes, missed his second straight game because of COVID protocols.

Neither team led by more than five in the second half, with an Ashton-Langford drive tying the game at 86-all with 8.2 seconds left and Wesley missing a short jumper on the other end.

Notre Dame had the game’s largest lead of eight midway through the first half. But the Eagles went into the break ahead 43-39 after Langford scored the final five points.