UMass Lowell Steals One on the Road at Merrimack 61-57 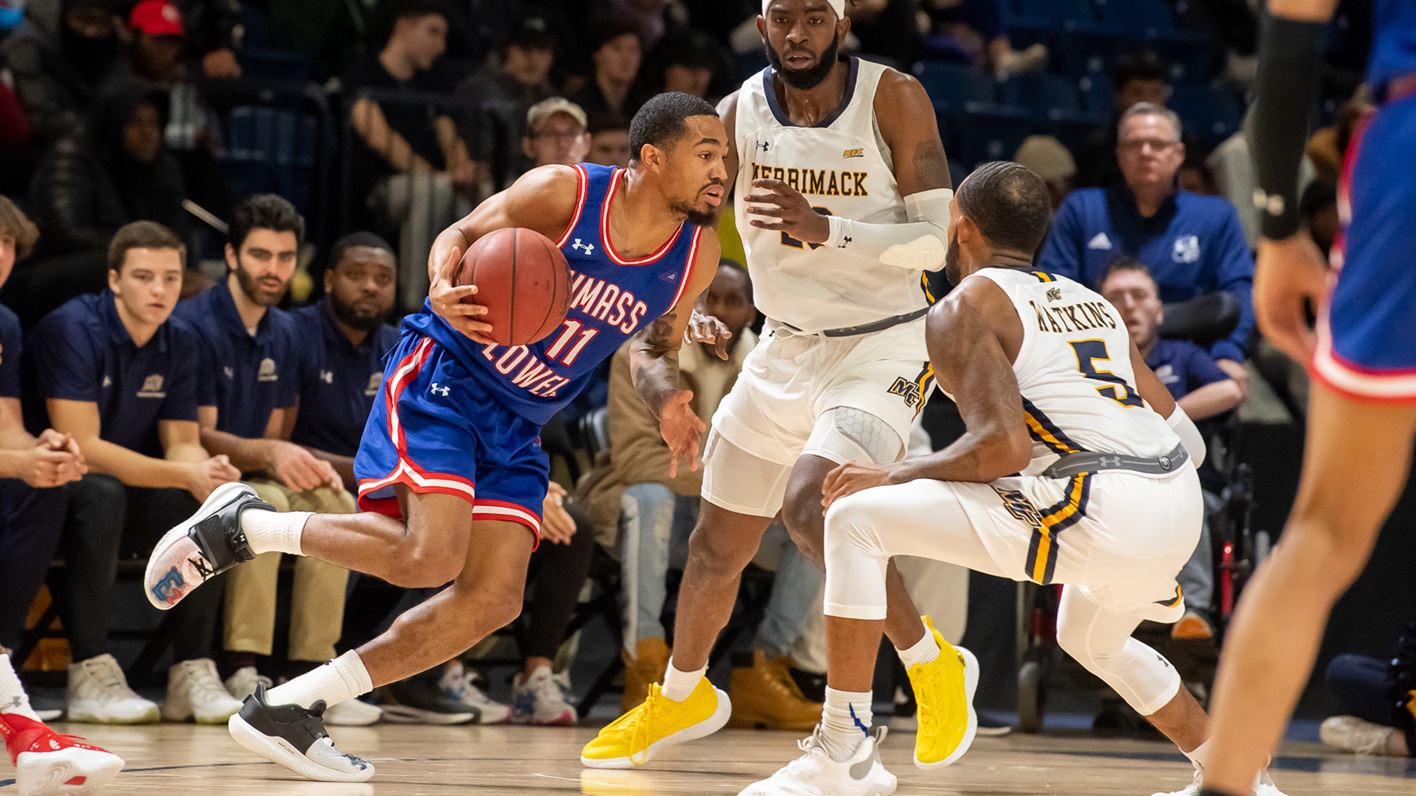 It’s good to see two schools separated by a mere thirty minutes get together to play a basketball game. UMass Lowell (6-3) and Merrimack (4-5) have only done this once before, but hopefully, this is the start of a yearly thing between the two programs. It would be very good for local college basketball in general. What was also good for the River Hawks was the return of Connor Withers to the active roster. Withers had been sidelined with a leg injury and with his return, Lowell is now at full strength for the first time this season.

Their struggles to put the ball in the basket from the perimeter or from behind the arc were once again on display in the first half at Lawlor Rink. They would shoot 12% (1-8) from three-point range and 44% from the field (11-25) in the first half. Most of their points came in the paint from either Max Brooks (6 points) or from Darion-Jordan Thomas (4 Points). Meanwhile, Merrimack did not have nearly as much of a problem hitting on their shots as they would shoot 52% from the field (15-29) and 50% from deep at 5-10. Jordan Minor (7 points) and Malik Edmead with nine were a problem for the River Hawks on the defensive side. The final ten minutes of the half saw the Warriors put together a double-digit lead they would take that with them to the locker room, 37-27. In fact, the River Hawks did not return from the locker room until there were only two minutes left before the second half was to start.

The rock fight continued into the second half. The difference was that the River Hawks were picking it up on the defensive end. For the entire second twenty minutes Merrimack would make only eight shots (8-26), and none from behind the arc (0-8). One of the Warriors made field goals at the time was a big one. Jordan Minor (19 points, 10 boards) muscled his way to the basket for an and-1 to give his team a five-point lead at 47-42 with twelve minutes left. Kalil Thomas knocked down the only three-point shot for Lowell in the second half, but it was a big one as it made this a one-score game at 55-52 with five and a half left. Then back-to-back layups from Brooks (17 points, 6 rebounds, 3 blocked shots) gave the visitors the lead at 56-55 with two and a half to play. All of this was part of a finishing 10-2 run by the River Hawks. In the end. it would allow them to steal a game on the road they had no business having a shot at.

UMass Lowell was able to pull this one out based on two things. Points in the paint (36) and points off the bench (19), with ten of those bench points coming from Withers who ended up playing nineteen minutes in his first game back. The Merrimack backcourt duo of Mikey Watkins (13 points) and Malik Edmeade (11 points) did all they could to keep the Warriors in the game.

A tough one for sure but let’s hope it is not the last time these two meet on the court.