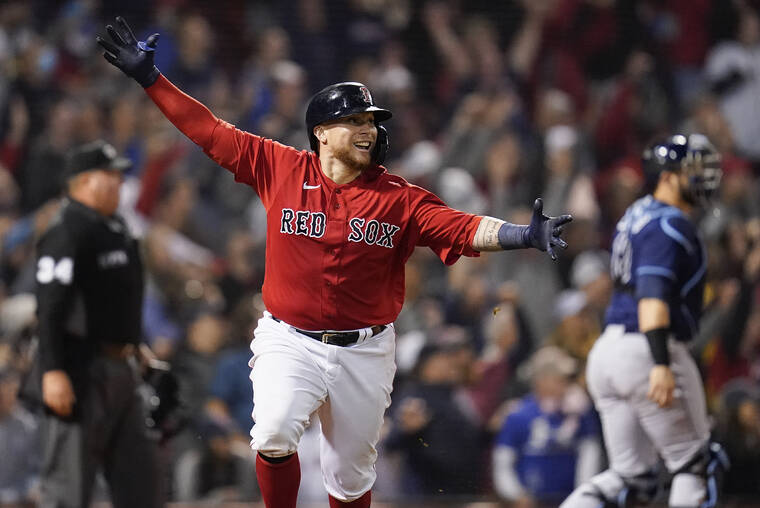 The playoffs began in earnest and bettors were ready to make their MLB picks for the postseason. The safe bets looked to be teams like the Rays, Brewers, and the defending champion Dodgers. But that is the thing about betting. There is never a sure thing and the predictable can quickly turn into the unpredictable.

The Rays, who clinched the AL East, and Red Sox met in the ALDS after the Red Sox beat the Yankees in the Wild Card game last Wednesday. It was a series that promised to provide offense as well as defense. The series did not disappoint.

In Game 1, the Rays would jump out to a 2-0 lead after one inning and never looked back. Starting pitcher, Shane McClanahan would pitch five strong innings, and the Rays would go on to win 5-0 to take the early series lead. In the game, Rays LF Randy Arozarena would hit a home run giving him 11 postseason home runs in his young career.

Game 2 saw the Red Sox come back in a big way. But after opening the game with two runs, the Rays came up in the bottom of the first and scored five times to take a 5-2 lead. The Sox would slowly chip away at the lead and in the fifth, they would score four times to take an 8-5 lead. They would score six more runs for the 14-6 win and tied the series at 1-1. Enrique Hernandez would be the star of the game going 5-6, including a double and a home run. He also had three runs scored to go with three RBI. J.D. Martinez would join in on the fun going 4-5 with a three-run home run.

So it was back to Boston for Game 3 and what a game it would be. Once again both teams would open the game scoring in their half of the first inning. By the end of the fifth, it was 4-2 Red Sox and it looked like they would cruise to a 2-1 series lead. The Rays had other ideas and scored two runs in the eighth to tie the game at 4-4 and the stage was set for one of the best finishes we have seen in quite some time. In the top of the 13th, the Rays 3B, Yandy Diaz singled to right. After Arozaena flied out to left, Kevin Kiermaier came up to bat. He hit the ball deep to right-center and the ball looked to have gone out for a home run at first. When the replay was shown, it would tell us that the ball hit the wall and bounced off of Red Sox RF Hunter Renfroe’s body and into the bullpen. According to MLB rule 5.06, the play would be ruled a ground-rule double and all base runners would be awarded two bases. So instead of scoring from first, Diaz would have to go to third. The inning ended and the Red Sox would get a chance to win it in the bottom of the 13th.

Martinez led off the bottom of the 13th by flying out to center. Renfroe would follow that by working out a walk and the stage was set for a dramatic finish. Christian Vasquez would play the hero by smashing a game-winning walk-off home run the give the Sox a 6-4 win and a 2-1 series lead. The Red Sox were now one win away from doing what the betting lines and others thought could not happen.

Game 4 provided us with the same drama we had seen in the previous two games. This time, it was the Red Sox that jumped all over the Rays as they scored five times in the bottom of the third to take a 5-0 lead. Red Sox nation could smell the win and a trip to the ALCS. All they had to do was hold off the Rays but that would not happen. Tampa Bay would score once in the fifth, twice in the sixth, and then it was on to the dramatic eighth inning.

Mike Zunino would open the inning with a double to deep right. Kiermaier would hit another double and bring home Zunino to make it 5-4. The Rays bench was a madhouse and you could feel the momentum starting to shift. What once looked like a Red Sox win now looked to be a lead about to be lost. Arozarena would step up to the plate and once again live up to the moment. He would single to center and around came Kiermaier with the tying run. Just like that, the Sox saw their five-run lead evaporate. But as Yogi Berra once told us, “it ain’t over till it’s over.”

The bottom of the ninth would prove to be the end of the Rays great 100-win season. Vasquez led off the inning with a single to left and was sacrificed to second. Travis Shaw would come up and beat out an infield single to make it first and third with one out. Up came one of the hottest hitters in Kike Hernandez with the chance to send the Sox to the ALCS. He would deliver when he hit a sacrifice fly to left and Danny Sanatana, pinch-running for Vasquez, came in from third with the walk-off winner.

With that, the Boston Red Sox beat the favored Tampa Bay Rays three games to one and move on to the ALCS to take on the winner of the Houston Astros-Chicago White Sox series.