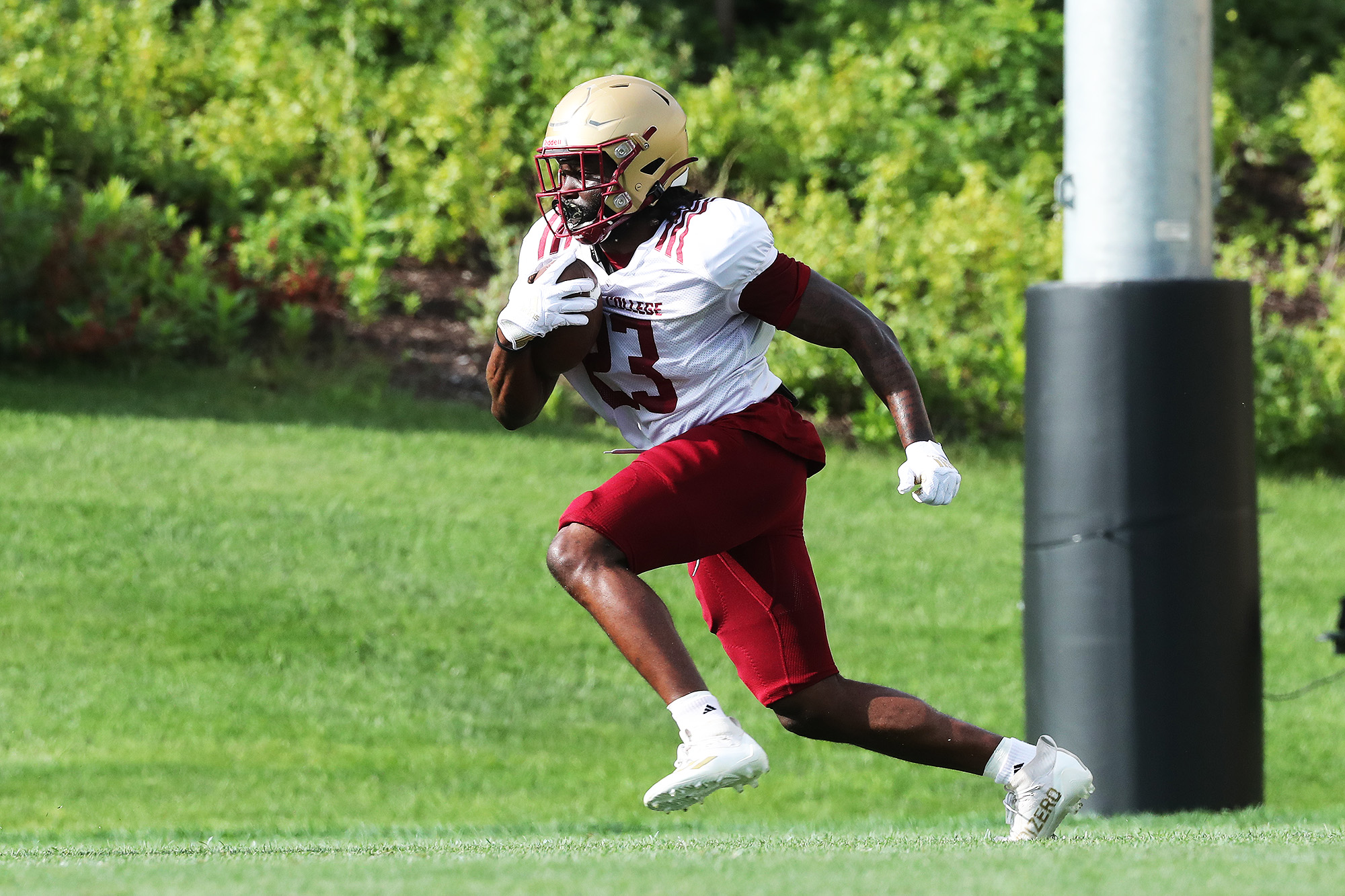 CHESTNUT HILL, Mass. – Boston College held its first of two preseason camp scrimmages on Monday outside on the Chamberlin Practice Field.  The Eagles were on the field for two hours in a thud-contact scrimmage.

“We’re getting some situational football, we scrimmaged today for the first time,” head coach Jeff Hafley said following the scrimmage. “We need to get a lot better. We’re not ready to play a game right now. I just told them that out there. We did a lot of really good things in the scrimmage. But we did a lot of things that would have beat ourselves no matter who we lined up against. And before you beat anybody, you got to get to the point where you don’t beat yourself.”

The running game stood out during Monday’s scrimmage as Alec Sinkfield scored two touchdowns, including going untouched from 40 yards out along with a two-yard touchdown run from Travis Levy. All four backs – Xavier Coleman, Pat Garwo, Levy, and Sinkfield had productive days running behind the offensive line.

“The one thing I thought we actually did really well today in the scrimmage, we ran the ball really well,” said Hafley. “And obviously that starts up front. We should run the ball really well because we have a really good offensive line. Great scheme. I thought that Sink (Alec Sinkfield) look good today. Trav (Travis Levy) had a couple of good runs. Pat had a huge run. And X (Xavier Coleman) looked really quick. You have a lot of competition there (at running back).”

Hafley also updated the media on the loss of Chibueze Onwuka for the season with an Achilles injury. “Booze (Chibouze) will be out for the year. Sadly, he probably had the best offseason he might have ever had. He became a leader for us and was playing at a really high level, probably would have started for us.”

The injuries have begun to pile up at defensive tackle for Boston College.

“I think we had four or five D tackles out of our scrimmage today,” Hafley said. “Then you get the young guys who are injured right now. Coach Vince is doing a really good job. Interior we are really banged up and it is going to be rolling people in and we got to find a way to coach it the best we can but we’re banged up inside right now. So we got to fix that. That’s probably where we’ve been hit the hardest injuries right now.

News and Notes: The Athletic named Alec Lindstrom a Preseason Second-Team All-American on Monday … Lindstrom has been named to multiple preseason All-America teams as one of the nation’s top centers entering the 2021 season … ABC/ESPN broadcaster Joe Tessitore along with New England Patriots President Jonathan Kraft were among the group of parents watching their sons at Monday’s scrimmage … Freshman Lewis Bond is another wide receiver who continues to open eyes in a deep WR room for the Eagles … he had a 25-yard reception from Dennis Grosel on third and long to move the chains Monday … graduate transfer JT Thompson had an interception for the defense … the Southern Illinois transfer looks to be in contention for a two-deep spot at corner for the Eagles … Pat Garwo had a couple of nice runs while Xavier Coleman showed his speed on a 20-yard reception … freshmen Ty Clemons and Neto Okpala teamed up for a would-be sack if the quarterbacks were live … Zay Flowers zipped through the defense on a quick pass along with freshman Jaden Williams. The two receivers have been explosive all camp … defensive tackle Khris Banks had two TFLs on the day up front for the Eagles … Tray Barry continued to show his impact in the passing game as he hauled in several receptions from Phil Jurkovec … the Boston College Eagles are off tomorrow before resuming preseason camp on the practice field on Wednesday.