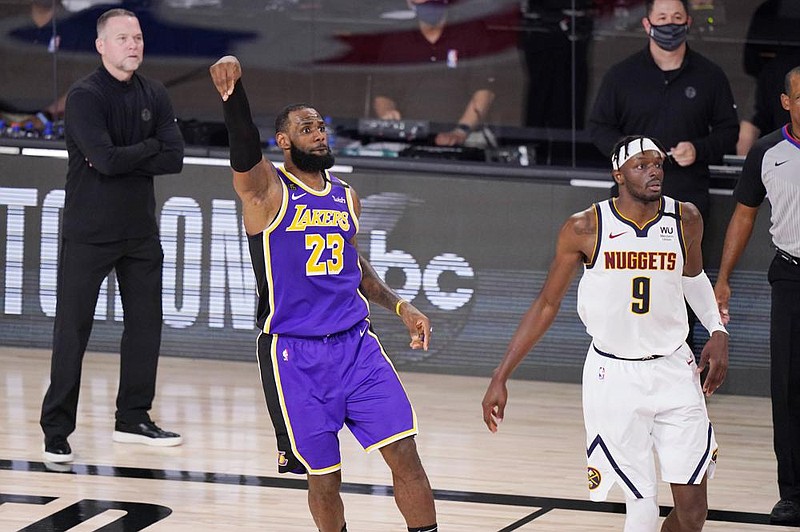 There was a Western Conference King crowned last night as the Los Angeles Lakers have reached the NBA Finals for the first time since 2010. A lot has changed since then and the two-headed monster duo of LeBron James and Anthony Davis was too overpowering for the Denver Nuggets as they beat them in five games. The final score in Game 5 was 117-107 Lakers.

This is LeBron James’ tenth NBA finals becoming the 4th player to do that in NBA history joining Bill Russell, Sam Jones, and Kareem Abdul Jabbar. He closed out the Nuggets posting 38 points, 16 rebounds, and 10 assists for his record-holding 15th career playoff triple-double. James spent the night attacking the paint relentlessly and proved nonetheless that he’s still the most fearless and dangerous freight train coming down the lane even at 35 years old in year 17. Lebron shot an efficient 60% from the field on a high volume 25 shots. The Lakers have ended every series thus far in gentlemen’s sweep fashion. Anthony Davis scored 27 points and grabbed five boards on 8 of 16 shooting. The duo continued to assert their dominance on both sides of the floor giving us what we all imagined would be happening if the pair was to work out.

Lebron has usually had a second perimeter star alongside him when reaching the NBA finals in the past. He’s never had such a gifted talented player at the big man position. Especially someone as versatile as Davis that benefits from arguably Lebrons’ most gifted talent; his vision. It’s shouldn’t be as big of a shock that Lebron James led the league in assists. Ultimately, Anthony Davis’s elite defensive ability is what made the difference in the series vs Jokic, Murray, and the Nuggets.

Davis’ ability to cover Jokic on any spot on the floor speaks volumes to his versatility as we can agree Jokic’s biggest advantage on his opponents is him forcing opposing big men to defend on the perimeter. Jokic’s incredible passing ability opens up lanes for slashers and he’s deadly shooting the ball from about anywhere on the perimeter.  All of this production from Davis on both sides of the floor should not come as a shock either. Davis is a career 30 and 10 in the playoffs. People often forget in 2018 when he and Jrue Holiday led the Pelicans to an upset of the Blazers in the Western Conference 1st round series. Anthony Davis is averaging 32 points a game on 55% shooting. The only other Lakers to do that in a Western Conference Final are Kobe Bryant, Shaquille O’Neal, Kareem Abdul Jabbar, and James Worthy. That’s it, that’s the list and that’s the company that Anthony Davis joined after last night’s series-clinching win.

Jamal Murray has been in a class of his own since the bubble has started. It was apparent the toll of the previous series had worn on him and you could see it in the way he was cutting and running around the floor gimpy as he may be dealing with some sort of leg injury. Can’t forget these guys all can’t be Lebron and play these crazy 40+ min games without feeling the fatigue down the line. The sharpshooting Kentucky product poured in just 19 points on 17 shots and went 0 for 4 from downtown. I’m sure he’d be the last to make an excuse, but with the Nuggets back against the wall, it’s hard to envision Murray playing all that time last night feeling just fine.

Murray did make NBA history becoming the first player to average 25 points, five assists, shoot 50% from the field, and 45% from the three-point line. As for Jokic, he was dominant for as long as he could be until running into Anthony Davis and the athletic frontcourt of the Lakers. Hopefully, other young pieces will continue to develop so that the Nuggets can reach those championship aspirations their talented roster is hoping for. The Lakers, in the wake of the late and beloved Kobe Bryant, see their run continue with the best duo in the game leading them head and shoulders. Time ticks as they await the Celtics/Heat winner. 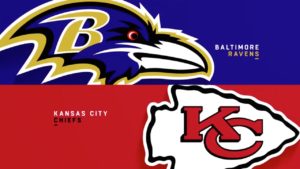 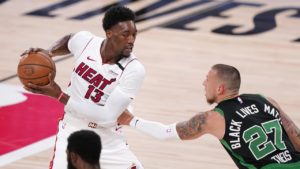 Next post NBA Playoffs: A Dive Into the Eastern Conference Finals