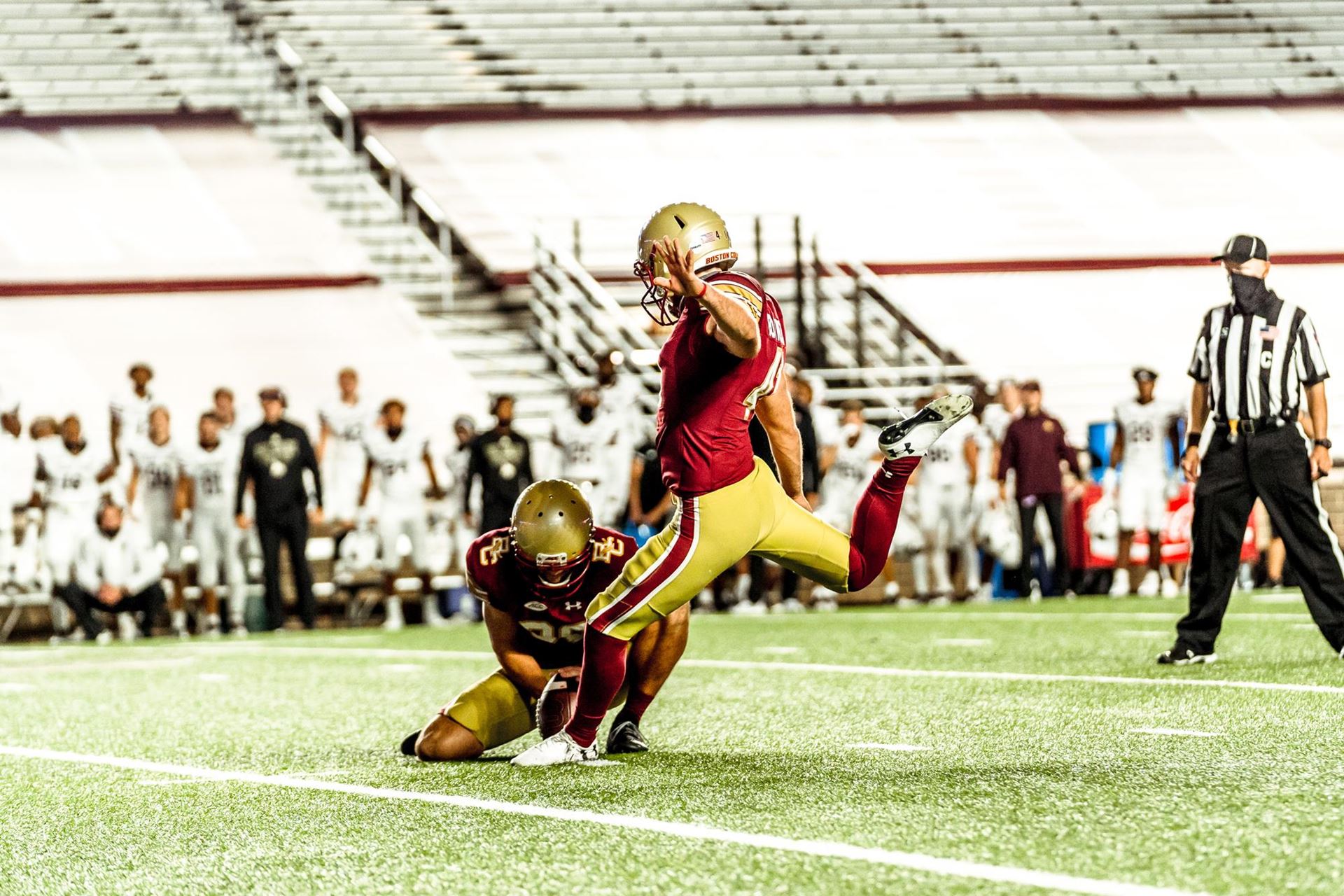 Phil Jurkovec was 26-for-38, for 210 yards, a touchdown pass, and an interception. Hunter Long hauled in a team-high nine catches for 81 yards and the game-tying TD. Six different receivers accounted for the 26 receptions on the night.

Texas State got on the scoreboard first, on a one-yard rush with 3:44 left in the first.  BC tied it up, as Jurkovec drove the ball into the end zone from two yards out at the 13:28 mark of the second quarter. The Eagles’ drive was well-positioned deep in Bobcats’ territory after Mike Palmer intercepted TSU’s Brady McBride at the BC 24-yard line and returned it 70 yards. Texas State pulled ahead, using an 11-play, 86-yard drive to pull ahead 14-7, holding onto that lead into halftime.

After BC started the third quarter three-and-out, Texas State increased its lead to 21-7 on the ensuing drive. Late in the third, Jurkovec again found the end zone for Boston College – this time from three yards out – making it 21-14, heading into the fourth. The two teams each had drives that ended in punts to start the final 15 minutes of play.

Boston College’s defense set up its final offensive drive of regulation, thanks in large part to Isaiah McDuffie’s 13-yard sack of Texas State’s Brady McBride. On the punt, the Bobcats were flagged for targeting on return man Levy, giving the Eagles the ball at the Bobcats’ 48-yard line.

The Eagles began to drive down the field.  A late-hit penalty on Jurkovec on third down gave BC a fresh set of downs inside the 10-yard line. The sophomore signal-caller found Long from five yards out, good for the game-tying TD with 1:11 remaining.

Another defensive stand, forcing a three-and-out, gave BC the ball with 47 remaining on their own 35-yard line. Jurkovec went to work, completing five passes for 49 yards to get to the Texas State 19-yard line, setting up Boumerhi’s 36-yarder for the win.

McDuffie led BC with 12 tackles, making nine solo stops, two sacks, and three for a loss. Max Richardson logged eight tackles (three solo), while Maximillian Roberts – in his first action for BC – registered five tackles – including two tackles for a loss and 1.5 sacks. Palmer made four stops and recorded an interception.