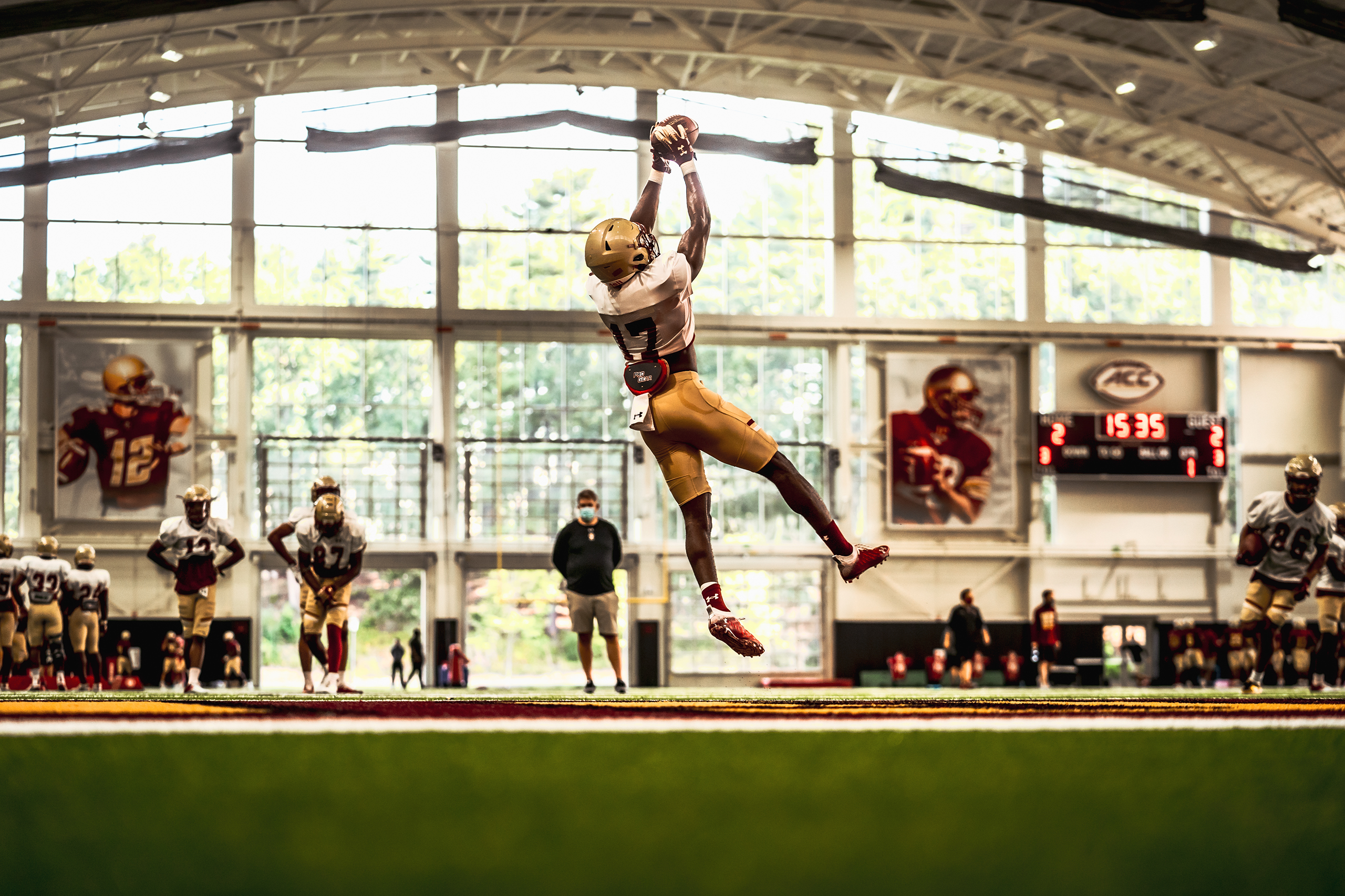 CHESTNUT HILL, Mass. – BC football held its eighth practice of preseason camp Friday morning inside Fish Field House. The two-hour practice featured an increased intensity level from both sides of the ball during the full padded practice.

Head coach Jeff Hafley met with reporters following Friday’s practice and discussed the latest round of COVID-19 results for the team. A total of 105 Boston College football student-athletes were tested for COVID-19 earlier this week. All 105 student-athletes tested negative.

Overall, Boston College has administered 792 COVID-19 tests to football student-athletes, coaches and athletics department staff, with one positive test. The one student-athlete has since recovered.

“It just shows you that our guys are doing everything they can to keep each other safe, and I give them credit,” said Hafley. “The protocols are on point and we are following them the best we can.”

Hafley has been pleased with the progress his team is making on the practice field as well. The Eagles have completed eight practices so far this preseason with two more scheduled for Saturday and Sunday prior to Monday’s day off.

“We’re getting better on the football field,” Hafley added. “We’re learning the scheme. We’re getting better fundamentally. But doing all the right things off the field is giving us a chance to do them on the field. And so far, we’ve been very fortunate to be able to do that. So hopefully we’ll keep moving forward and we’ll kick the ball off in September.”

Practice Notes: Jeff Hafley will appear on WEEI’s Ordway, Merloni, and Fauria Show today at 5 p.m. … the full pads practice featured an inside run period to start the day … during the first team period of work Friday, sophomore quarterback Phil Jurkovec found sophomore wide receiver Zay Flowers behind the secondary for a beautiful, 70-yard touchdown pass … Flowers had a big day receiving as he also hauled in a 45-yard reception from Jurkovec along with a red zone touchdown reception … the Eagles worked on red-zone situations both in teamwork and 7-on-7 … junior defensive end Marcus Valdez recovered a fumble to go along with a sack Friday … senior safety Mike Palmer came down with an interception during team period … senior linebacker John Lamot finished with a tackle behind the line of scrimmage in teamwork … the linebackers also saw big plays during team periods from sophomore Joe Sparacio (TFL in the backfield) and a sack from sophomore Hugh Davis … junior safety Jahmin Muse broke up a touchdown pass in the end zone during red-zone work … true freshman defensive tackle Cam Horsley blocked a field goal near the end of practice … redshirt freshman quarterback Sam Johnson connected with junior tight end Hunter Long on a long gain during team period work … junior quarterback Dennis Grosel found sophomore wide receiver Ezechiel Tiede on the sideline as he went up in traffic to come up with the terrific reception … Tiede, who has played defensive back and quarterback last season in practice, has looked to find a home at wide receiver so far this preseason … the running back room continues to show great depth as true freshman Andre Hines had a nice first-down carry in 11-on-11 drills Friday … senior defensive end Brandon Barlow had a would-be sack if the quarterbacks were live … sophomore linebacker Nick DeNucci came away with a pass breakup in the end zone during red-zone work.