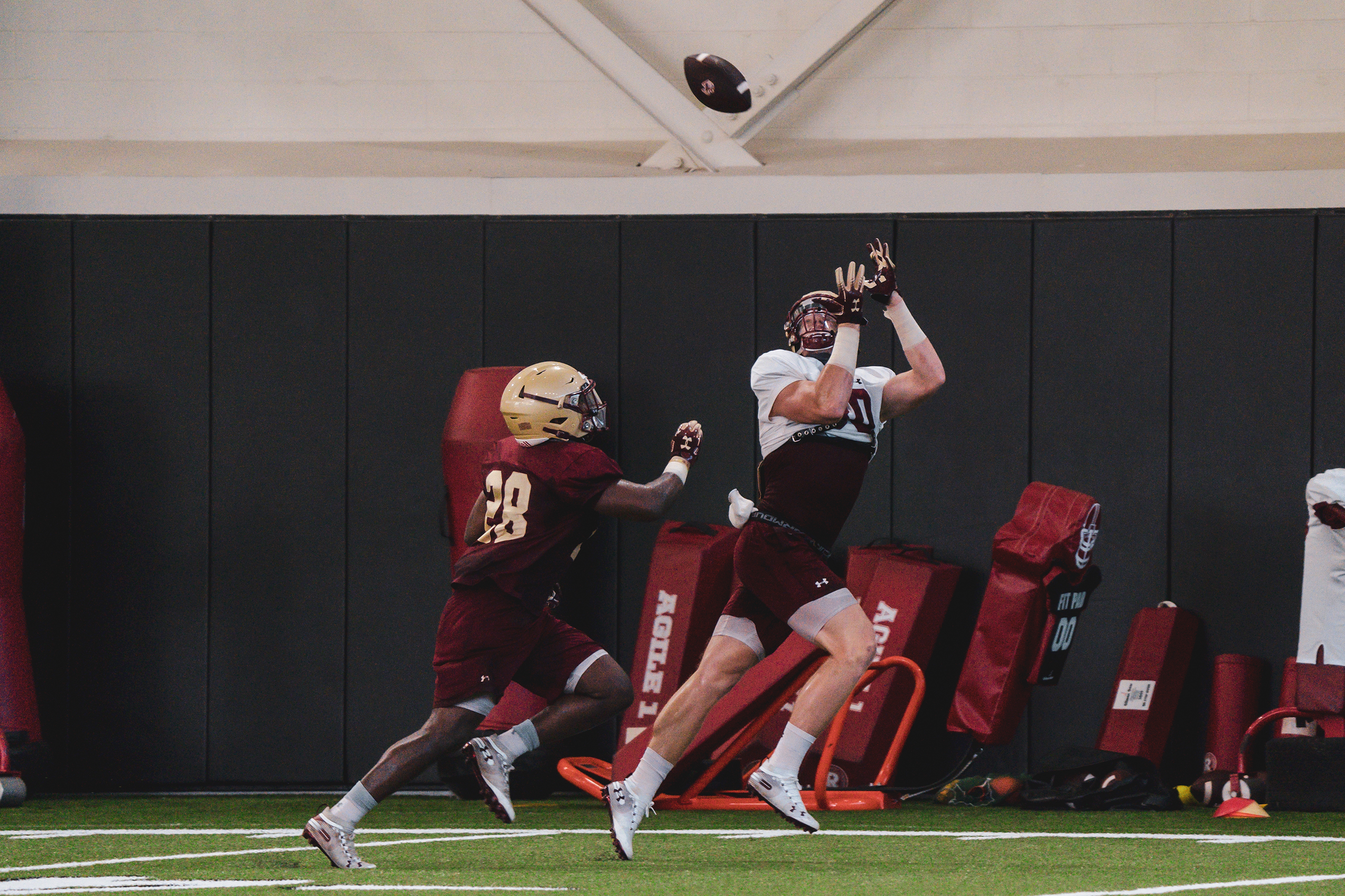 CHESTNUT HILL, Mass. – After its first off day of preseason camp, the BC football team returned to Fish Field House for the sixth practice of camp on Wednesday. Head coach Jeff Hafley dialed back the practice from a length perspective (10 periods) and going with just shoulder pads and helmets for the squad.

Offensive coordinator and quarterbacks coach Frank Cignetti met with reporters via Zoom following Wednesday’s practice. Cignetti discussed how he plans to get the playmakers involved in the offense and his initial thoughts on junior running back David Bailey and his fit in the BC offense.

“All the perimeter players, we’re going to make sure we put them in a position to be successful … the system is built that way,” Cignetti said. “The work we had in training camp so far has been invaluable. We don’t ever want to lose the physicality of being able to play power football, but we also want to be able to play wide open and put guys in a position to be successful.”

Cignetti also touched on junior running back David Bailey and how well he has played in all three phases as a back.

Last season, Bailey finished second to AJ Dillon on the team with 844 yards rushing and averaged 5.7 yards per carry and added seven rushing touchdowns. He also caught 10 passes for 94 yards and a touchdown out of the backfield in the passing game.

Practice Notes: Following practice on Wednesday, junior center Alec Lindstrom hosted the latest “Listen Up My Dudes” podcast with offensive tackles Ben Petrula and Tyler Vrabel. Look for the latest episode on The Perch later today on iTunes, Spotify, and BCEagles.com … Wednesday’s practice was without full contact, but the intensity level between the offense and defense was high throughout the workout … redshirt sophomore cornerback Elijah Jones had a productive day in the secondary, breaking up one pass and picking off a pass on a tipped ball over the middle versus the first-team offense … All-ACC linebacker Max Richardson led the league in solo tackles a season ago and showed great versatility in defending the pass with two pass breakups on Wednesday … quarterback Phil Jurkovec looked comfortable in the pocket on Wednesday, connecting early in team period with sophomore wide receiver Ethon Williams and junior tight end Hunter Long for a long gain … he also was in sync with a chunk play to sophomore wideout Zay Flowers and junior wide receiver CJ Lewis … redshirt freshman tight end Spencer Witter had the “play of the day” with a terrific diving reception on a throw from Jurkovec … senior linebacker John Lamot almost had an interception but settled for a PBU during team period … sophomore cornerback Josh DeBerry continued to be a presence in the secondary with a couple of pass breakups on Wednesday … junior safety Jahmin Muse snatched an interception during teamwork while junior defensive end Marcus Valdez, sophomore defensive tackle Kyiev Bennermon and sophomore defensive end Shitta Sillah all tallied sacks during team periods.