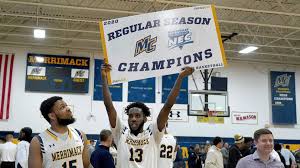 When you look back at the 2019-2020 college hoop’s season, there were plenty of stories that kept your interest. None was better than the one that took place in North Andover, MA. In the spring of 2019, Merrimack College made the decision to upgrade its men’s basketball program from division two to division one. At the time, it was a move that some people did question. But after a 20-win season and a regular-season championship in their first season as a division one member, it appears that the program and the man that spearheaded it had the final word.

Head coach, Joe Gallo, has been at the helm of the Warriors program for four years. During that time, his teams have averaged 19 wins per season. But this past year may go down as one of his best coaching jobs. How else can you explain a team that still had players on the roster that were brought on campus to play division two ball? A year later, at a higher level, they do something that no other team in the same position has ever pulled off in NCAA history. And by season’s end, were playing before sold-out crowds at home.

Coach Gallo is the straw that stirs this drink and his players are more than willing to buy-in. After an opening night loss at Maine, the Warriors turned their season around by beating Northwestern, the school’s first win over a Power-5 conference school. It was also the first time that a program that was in the reclassifying window had ever done this. They would go on to rattle off a nine-game winning streak, the longest such streak in Gallo time at Merrimack, and the longest in school’s past ten years. The program set an NCAA division-one record for wins in their first year as a member and would end the season with the most wins in New England division-one basketball.

For coach Gallo, he would be named for sixth different end of season Coach of the Year awards. He also guided his team to the regular-season championship in their first year of playing in the Northeast Conference by winning on Senior night vs Central Connecticut State. His 81 wins are the most in school history over a four-year span. Make no mistake that the job Gallo is doing is being noticed around college basketball. And it is just a matter of time before offers from other schools begin to pour in. How he and the school handle this attention will go a long way toward how this can be kept alive.

For now, both Gallo and the school are in a very good position for a program that is still in the reclassifying period. Kids will be interested in playing for a team that has established a winning culture. Scheduling games might be a little tricky only because other teams now know that Merrimack is not an easy out. If teams around the country are looking to put a quality non-conference opponent on their schedule for next year and beyond, they can look no further than Merrimack College.