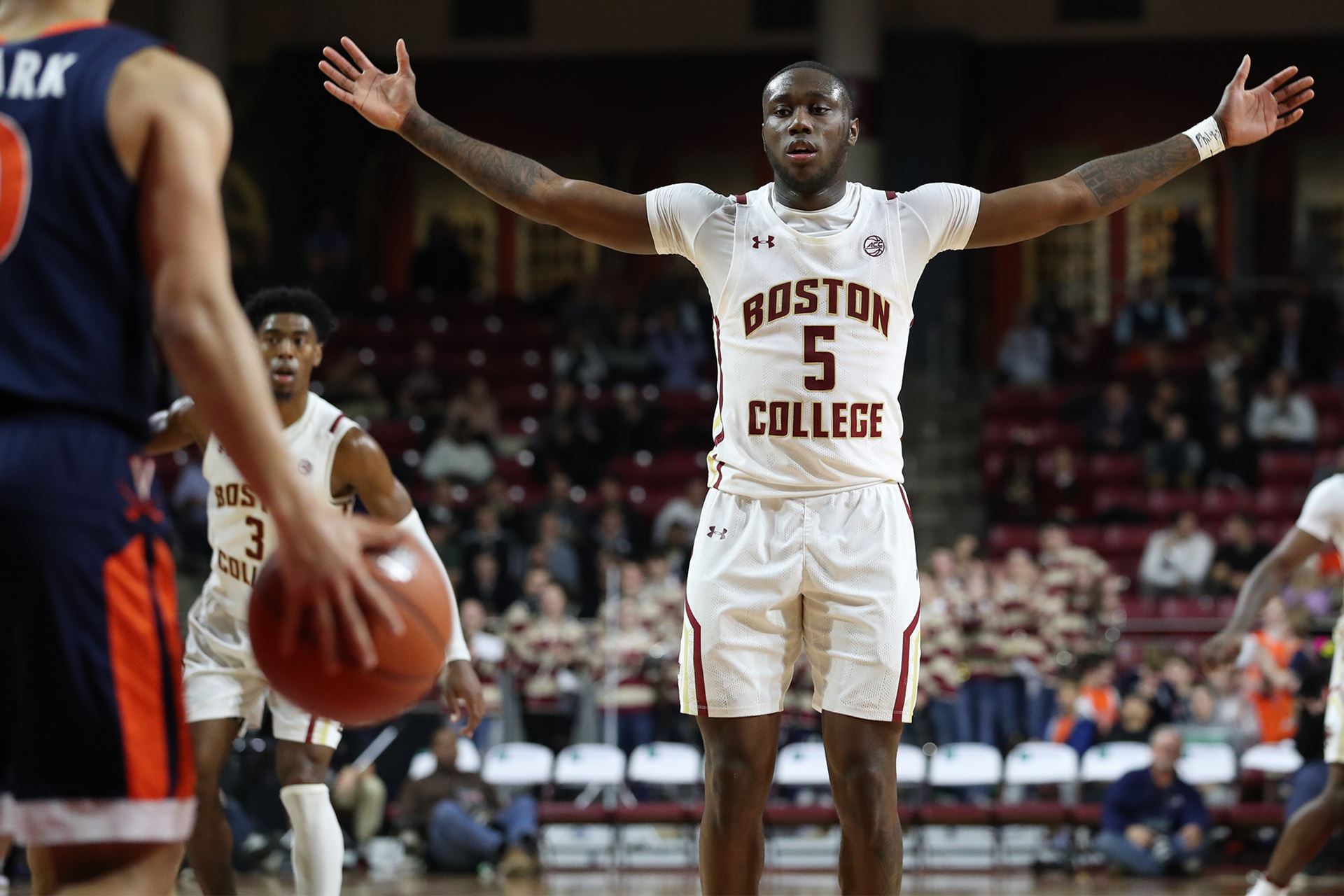 Down five with five and a half minutes left in the game, it was starting to look like Boston College (9-6, 3-1 in ACC) had thrown one away. Instead, the Eagles finished the game on a 15-3 run with a big right corner three from Jared Hamilton (16 points) to give the Eagles the lead they would never give back. On Tuesday night, Boston College finished what they started with a hard-fought 60-53 victory over #18 Virginia Cavaliers (11-3, 3-1 in ACC).

After the game, Virginia head coach, Tony Bennett, said it best, “they outplayed us.” BC held Virginia to 32% shooting for the game and their defense was even better from three-point land as they held the Cavaliers to 23% shooting (4-of-17). The Eagles placed four players in double-figures and got a good effort from junior forward Steffon Mitchell (10 points, eight rebounds). Head coach Jim Christian did not know he could play until five minutes before tip-off because of him being sick all day. It was the kind of team effort that can turn a season in your favor. For Boston College, Tuesday night was a great night of basketball.

The Eagles were forced to start three freshmen because of injuries. Graduate senior Derryck Thornton did not play because of an ankle injury suffered in their last game at Duke and Nik Popovic missed his sixth straight game with a back injury. To go against the defending national champions with three freshmen in your starting lineup was a tough task for sure. But it was what Boston College was faced with and they all played well.

The Eagles held the lead in the first half for over sixteen minutes. The Cavaliers shot just 20% eight minutes into the game. They were 0-for-6 from three-point range almost fourteen minutes into the half. It was a game that features four ties and three lead changes, most of them in the second half. Boston College was able to control how the game was being played. They would start the game on an 18-8 run that would give them there only ten-point lead of the half with 10:46 to play. Mitchell had four points and Hamilton had four as well. Early on, BC was playing with fire in their eyes and it showed. There is a reason why Virginia is the defending national champs and for a stretch, in the half, they played like it. They would cut the lead to one on a Kihei Clark (five points) fast-break bucket that at the time made it a 21-20 game. But the Eagles would hold off Virginia and take a four-point lead with them to the break at 30-26.

The second half came down to the last five minutes of the game. Virginia took the lead at 48-45 on an and-1 by Mamadi Diakite (nine points, seven rebounds) Then, Clark made two free throws at the line to give Virginia its biggest lead of the night at 50-45 with 5:25 to go. Jay Heath hit his own three-point play and tied the game at 50, (17 for Heath). After a short Eagle lead, Braxton Key (12 points) knocked down a jumper in the paint to give Virginia a tie once again at 53 all. Hamilton then hit the shot of the game, a right corner three off a feed from Heath to give BC the lead again at 56-53. Hamilton said, “I was looking to find a window from the corner.” From there, the Eagles made their foul shots, four of them in fact, to seal their biggest win of the season, 60-53.

Christian said, “the team showed a lot of courage down five.” Of Mitchell, he said it was an “effort game” considering his doubtful status for the game. What he brought to the court on Tuesday night was a big lift to his teammates. BC has a couple of days to get things back together before they host Georgia Tech on Saturday night.