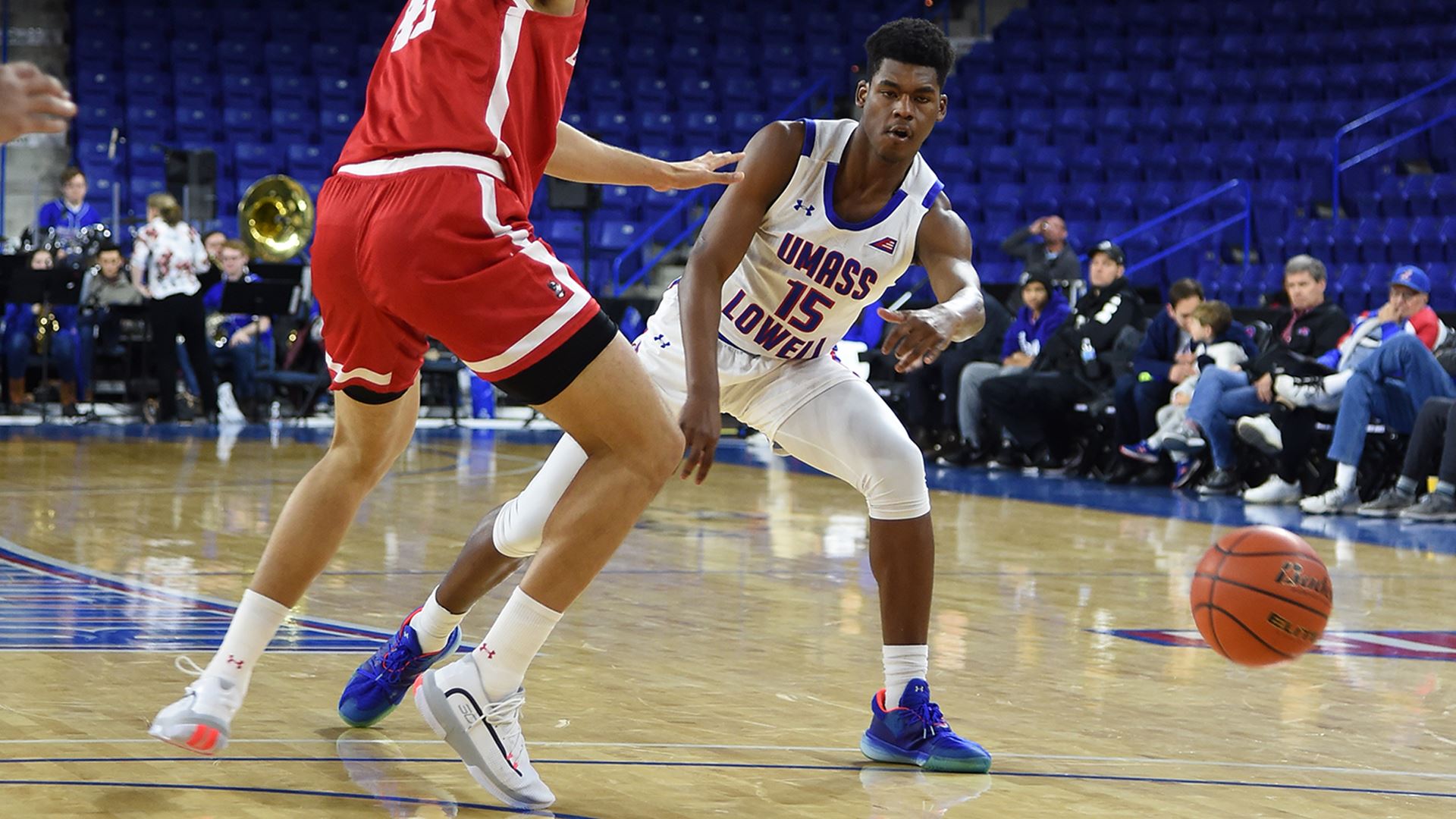 Maybe the ten days off between games had something to do with it. Or it could have been just one of those off days that happen from time to time. Whatever the case, the UMass Lowell River Hawks (6-7) were flat from start to finish. They had trouble putting the ball in the basket shooting 31%, (21-of-67), from the floor and 5-for-21, 23.8% from three-point range. There were stretches during the matinee game on Saturday when they could not buy a hoop. As head coach Pat Duquette said afterward “Right from the start we could not make shots.” Boston University could and did shooting 45% from the field (29-of-64), and their star inside player, Max Mahoney came to play (23 points, 7 rebounds). The Terriers (5-7) go on the road and win for just the second time in non-conference play 74-62 over the River Hawks.

Boston University led this game from beginning to end and there was only one tie and that was all of fifty-seven seconds at the start. Mahoney hit the games’ first shot, a short jumper in the lane. From there, it was all downhill for the River Hawks. The only thing that kept the home team in the first half was BU turnovers, eight of them. The River Hawks missed their first 10-of-13 shots but did take advantage of those Terrier’s mistakes scoring eleven of their 27 first-half points off of them. UMass Lowell was only down two with eight minutes left in the half on a layup bucket by Obadiah Noel (16 points, 4 boards). At the time, it was 19-17 BU. The Terriers then went on a 9-2 run to get the lead back to nine at 28-19 with four minutes left in the half. The River Hawks closed the first half on a 7-4 run which included the only three-point make of the half by Ron Mitchell (11 points,10 rebounds, first double-double of his career). As bad as they played in the first twenty minutes, they were only down five at the break at 32-27.

The second half started just like the first, UMass Lowell could not make shots and BU did. Mahoney started to become the inside threat that makes him one of the best players in the Patriot League. He would score 17 of his game-high 23 in the second half. Many of these points came inside as the River Hawks could not stop the entry pass to the low post. Duquette thought his team did a good job on BU’s star player in the first half, but in the second half, it was a different story. BU started the second half on an 8-0 run with Mahoney getting six of those eight points including a dunk to push the lead to eleven at 38-27 with 18:27 left in the game.

The advantage jumped to twenty for the Terriers on a fast break layup by Walter Whyte (10 points, 6 rebounds). A Javante McCoy layup (14 points, 5 assists, 5 boards) pushed the lead back to twenty for the second time in the half at 68-48, and another McCoy lay in gave his team its biggest lead of the day at 22, 70-48 with 3:46 left. All that was left to do was run the clock out which BU did and got the win 74-62.

UMass Lowell got 16 points from Christian Lutete and 10 from Jordyn Owens. The River Hawks will hit the road right after Christmas to play a couple of games before conference play gets started. First up will be a game next Friday night at Loyola MD.