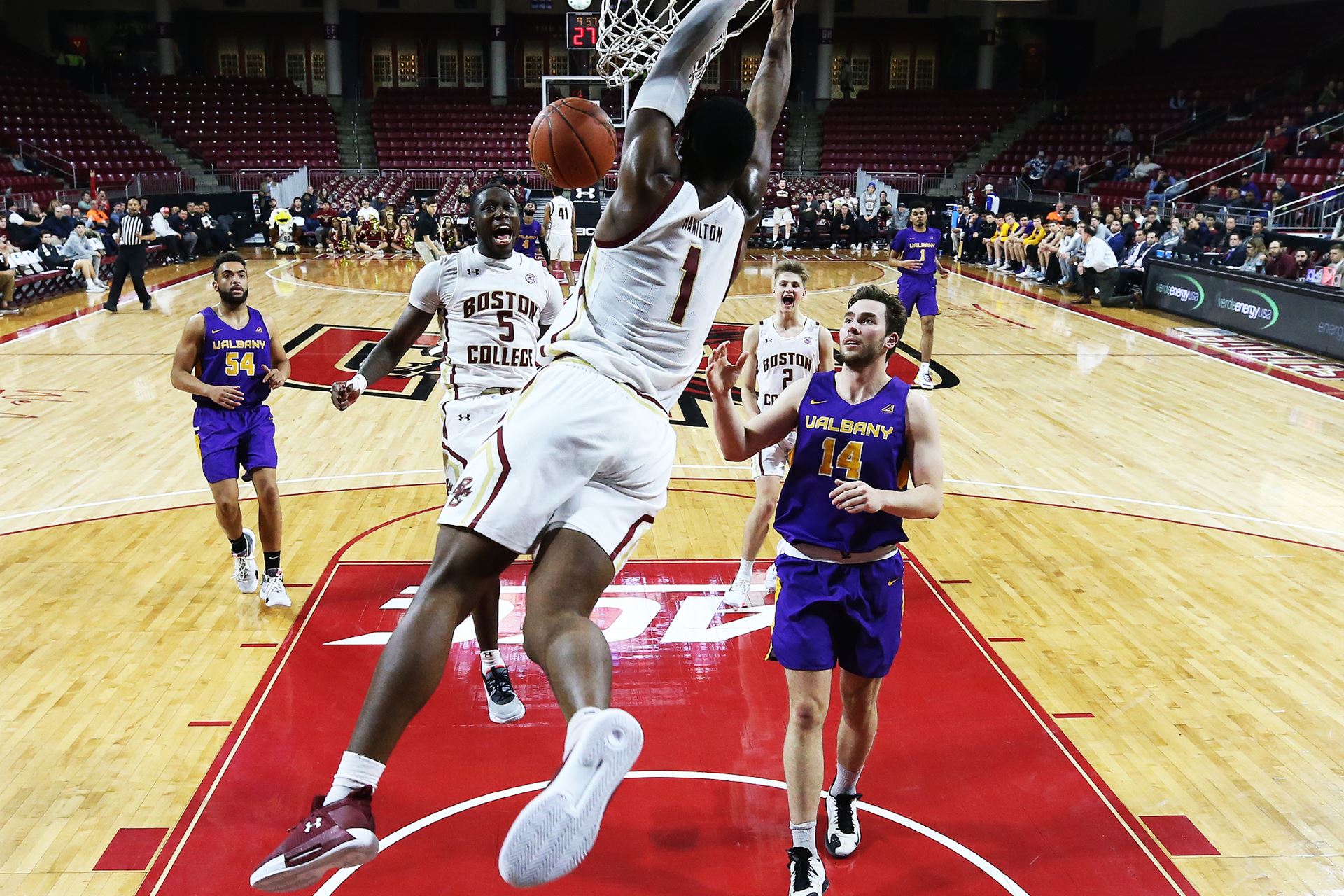 The Boston College Eagles (6-5) met the Albany Great Danes (5-6) on the hardwood for the very first time. It was a game that can best be described as tough to watch at times. With cold shooting by both teams, and at times a few too many turnovers, Boston College pulled out the victory, 72-51. After the game, Albany head coach Will Brown said: “two things we needed to do tonight, rebound and don’t turn the ball over.” The rebounding they were fine with as the Eagles outrebounded the Great Danes by only two, 44-42. The turnovers were another story. Albany turned the ball over twenty times that led to 30 Eagles points. Afterward, the coach thought that was the difference in the game along with their three-point shooting that was not up to speed (6-for-25, 24%).

Injuries have also been a problem for Albany. the coach said, “we are getting people back.” One of those he mentioned was transfer JoJo Anderson from the Univ. of Nevada. He has been out with a knee injury and has just been cleared to rejoin the team. Adam Lulka returned to the team after being out a month with an injury and played twenty-four minutes. A little more than you would think coming back from being out for that length of time. Lulka said, “I will do what the coach needs me to do.” Brown pointed out “we just need to stay the course and we will be ready for conference play.”

As for the game at BC, the first half saw six ties and five lead changes. Both teams had leads of six points. Albany hung tough with the Eagles having the lead for most of the first half (11:12 to BC 3:24). They were perfect from the foul line (6-for-6) and got some outside production from guard Cameron Healy who had 11 first-half points on his way to 13 for the game. Boston College used the three-ball to get things going. Steffon Mitchell (double-double of 15 points and 13 rebounds, first one of season), and Jairus Hamilton (16 points) gave the Eagles the early lead at 6-0. Albany put a run together of 10-2 to take their six-point lead at 22-16 with 10:18 left in the half. Healy got six of those points on a couple of made three’s. From there, the half stayed close with Albany escaping with a one-point halftime lead of 31-30.

The second half was a different story as the Eagles turned up the defensive pressure and the Great Danes could not handle it at all. Albany made 12 turnovers in the half which Boston College turned into 20 points. They would shoot 1 for 8 from deep, 12.5%. As Cameron Healy said later “their pressure sped us up.” The Great Danes could only muster 20 points for the half and the coach credited BC with making his team play faster which on Tuesday night, did not go well for Albany. BC’s first double-digit lead came on a Julian Rishwain’s three (11 points). It was 46-34 with 14:49 to play. It became twenty on a Mitchell fast-break layup to make it 66-46 with 4:51 to go. The lead finally hit its high watermark of 23 on a Derrick Thornton layup in the paint and it was 69-46 with three minutes to go. The Eagles backcourt struggled on Tuesday night shooting a combined 5-for-20 with Jay Heath scoring only 11 points on the night. But on this night, they could get away with it.

Still, a win is a win and the Eagles will take it given what lies ahead for them which is conference play in less than three weeks. The same can be said for Albany who now has lost three in a row as they go home to play Niagara. Boston College will be back at home on Sunday taking on Central Connecticut State in another non-league match up.