Tampa Bay Buccaneers: Jameis Winston Will be Back in 2020 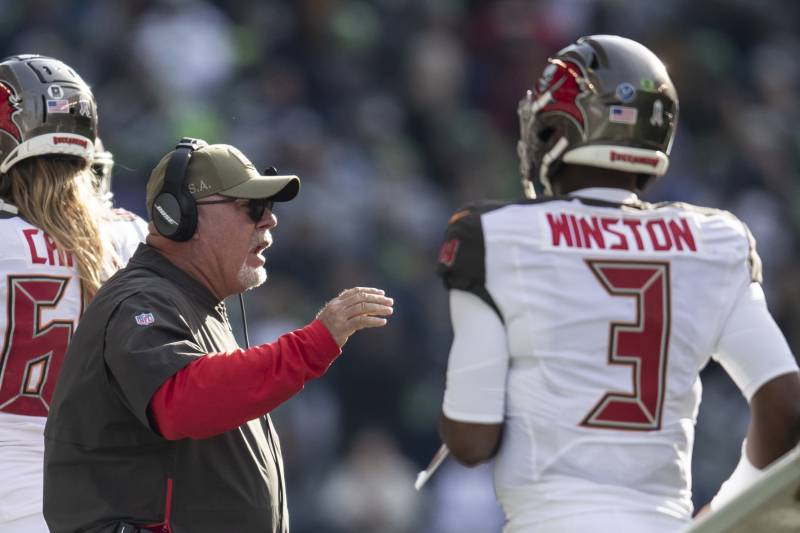 There are three weeks left in the NFL season. One of the teams that have been good the last few weeks is the Tampa Bay Buccaneers. Most believe the team will finish 7-9 or 8-8. No matter what the conclusion is, it will be better than it was in the last two years. The Buccaneers have finished 5-11 before 2019. Head coach Bruce Arians has turned this team around. One of the main reasons he came to Tampa Bay was because of Jameis Winston. He coached Winston at a quarterback camp when Jameis was in high school. Winston is playing on a fifth-year option with the Bucs. He, of course, came out of the 2014 NFL Draft as the number one overall pick. He has had his up and down games through his five years in the league. Arians believes that Winston can be one of the greats.

Now, the question that was thrust upon me was what do the Tampa Bay Buccaneers do at the end of the season? Do they sign Winston or draft a new quarterback in the 2020 draft? In my opinion, it will depend on the final three games. In fact, Bruce Arians came out this week and said he is not going to commit to Jameis Winston in 2020. He does lead the NFL in interceptions. On the other hand, he has shown that he can be great. One of the main problems that he has is he always wants to make a play. Instead of throwing the ball away he takes a sack or turns the ball over. This always seems to come at key moments in games. Until he can stop this, he will be labeled a bad quarterback. This will cost him a better contract.

If he plays like he has the last two weeks, I can see the Bucs offering Winston a one-year proven deal. The Bucs are known for offering players a contract to see if they work out. They have Shaq Barrett on one and look at the season he is having. Local media has said the contract will be for about 10 million. He will not get much more out there. What I mean is there are not many teams clamoring for his services. If the Buccaneers decide to move on from him, the options they have are few and far between. The likes of Cam Newton, Philip Rivers and yes, even Colin Kaepernick. If the final three games go well, I don’t see why they don’t resign him.

I believe the fan base is 50/50 on Jameis Winston. Some believe he has done enough to get at least a one-year deal. After next year, if he is still struggling, then it’s time to cut him loose. The Buccaneers shouldn’t offer him any big money until he is able to get past his demons. If next year he is through turning the ball over, he might become the first franchise quarterback. Many don’t know that the Buccaneers have never had a franchise quarterback or signed one to a second-long term contract. Will Jameis Winston be that quarterback? We will have to wait and see.