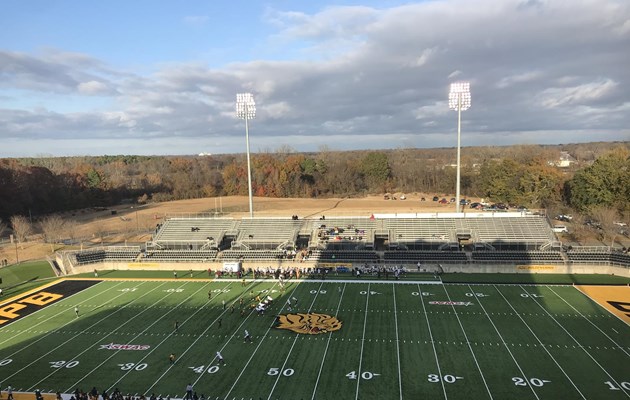 UAPB opened the game by driving 77 yards in 10 plays as Tyrin Ralph took a pass from Skyler Perry and ran in for a seven-yard strike and a 7-0 lead following the PAT. After a three-and-out by TSU, UAPB drove all the way down to the TSU 2 but the Tiger defense held on and held the Golden Lions to a 19-yard field goal and a 10-0 lead.

Early in the second quarter, Perry found Henry Ballard for a 41-yard reception to set up UAPB’s second touchdown as Taeyler Porter rushed in untouched for a five-yard scamper and a 17-0 lead after the PAT. On the ensuing TSU drive, quarterback DeAndre Johnson was sacked from behind and fumbled as UAPB recovered at the TSU 48. The Golden Lions only needed one play for their third touchdown of the game as Ballard broke free from an army of TSU defenders for a 48-yard touchdown as the deficit grew to 24-0 with 11:42 remaining.

The Tiger defense came up with a big play as Drew Robinson recorded a sack strip and Jerryl Taylor jumped on the ball as the Tiger offense received the ball at the UAPB 22. Three plays later, TSU found the scoreboard for the first time as Johnson found Ke’Lenn Davis for an 11-yard touchdown reception and a 24-7 margin after Richard Garcia III’s PAT. The momentum was short-lived as Porter broke free for a 38-yard run on UAPB’s next possession which ultimately set up a 21-yard touchdown pass from Shannon Patrick to Darryl Carter. The PAT was good as UAPB led 31-7 with 3:07 left in the half. TSU drove down to the UAPB 26 as time expired in the first half but the PAT was blocked.

TSU would add a touchdown to open the fourth quarter but that would be its lone score as UAPB added a pair of scores.

Despite the outcome, the Tigers set a program mark as Donnie Corley went over the 1,000-yard receiving mark. It marked the first time in school history that TSU has produced back-to-back 1,000-yard receivers.