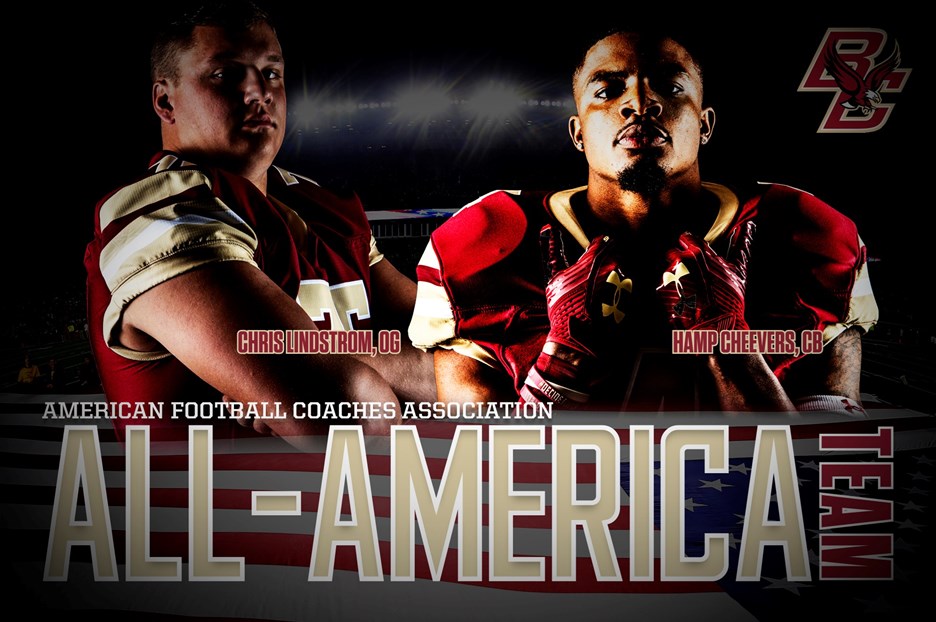 The AFCA has selected an All-America team since 1945 and currently selects teams in all five of its divisions. What makes these teams so special is that they are the only ones chosen exclusively by the men who know the players the best — the coaches themselves.

Both Cheevers and Lindstrom were All-ACC first-team selections.

Cheevers tied for the nation’s lead with seven interceptions in his first year as a starter for the Eagles. He tied for second on the squad with seven pass breakups as well.

Cheevers allowed just 35 receptions on 74 targets in 2018 for 433 yards, according to Pro Football Focus. Cheevers allowed a passer rating when targeted this season of just 40.0, which ranked second in the conference among cornerbacks. Cheevers played in 92% of his team’s defensive snaps in 2018 after playing in just 30% last year.

Lindstrom finished the 2018 season with the No. 1 pass blocking grade (90.9) nationally of any offensive guard. He allowed zero sacks, zero QB hits and just three hurries on 370 pass blocks in 2018 (pressure rate allowed: 0.8%) according to Pro Football Focus. Lindstrom ranked No. 1 in the nation among guards this season (min 200 pass blocks) with a pass block efficiency of 99.6.

Lindstrom has not allowed a pressure in his last seven starts. The Dudley, Mass., native has also been flagged for just one penalty all year on 864 snaps. Lindstrom has never been penalized more than two times in a single season in his NCAA career covering 50 games.

Boston College returns to a bowl game for the fifth time in six seasons on Wednesday, Dec. 26 in the SERVPRO First Responder Bowl against No. 23 Boise State. Kickoff is set for 1:30 p.m. on ESPN and the BC IMG Sports Network.