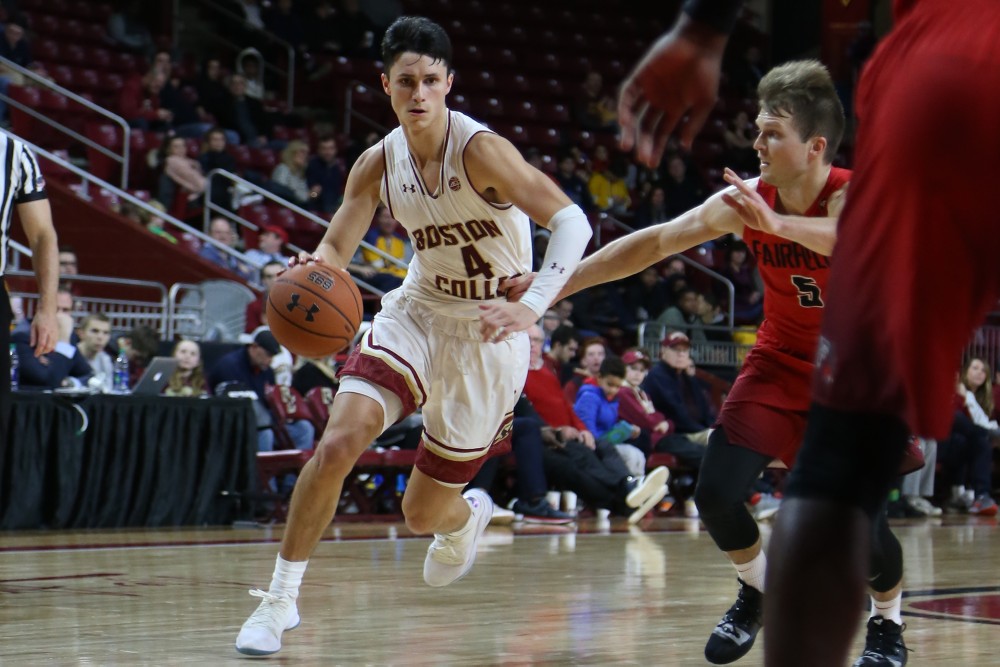 Down two starters is never a recipe for success. However, that’s what the Boston College Eagles faced on Sunday afternoon as they faced Fairfield. With both Jordan Chatman (ankle) and Steffon Mitchell (quad) unavailable for the game, head coach Jim Christian needed help from other players if his Eagles (8-2) were to be winners.

Getting a combined 61 points from the trio of Ky Bowman (19 points, 12 rebounds second straight double-double), a season and career high 22 from freshman Chris Herren, and 20 from fellow freshman Wynston. Tabb, the Eagles were able to get the victory over the Stags (2-9) 77- 67.

It was an interesting first half in which Fairfield did not take a free throw and the Eagles received only four points from their frontcourt. Nik Popovic scored four on the way to his second straight double-double of 11 points and 10 boards.

What Boston College did get was backcourt scoring. Herren, making his second start in a row, and Tabb each contributed 13 first-half points. It would offset a rough first twenty minutes from Bowman who could only muster four points but did have seven rebounds. As Christian said afterward “his on the ball defense was good”.

The Stags stayed in the game with production off the bench from a local guy. Freshman guard Calvin Whipple from Leominster, Ma. continually torched BC’s three-point defense to the tune of 12 first-half points on four-of-six shooting from deep. He would finish with a team-high 21 on the afternoon.

Despite not getting to the free throw line for the entire first half, the Stags were in the lead on two different occasions in the half. Both times as a result of Whipple three-point bombs. The first time with seven minutes left at 23-21. Then at the three-minute mark at 28-27. When the teams went to their locker rooms, the Stags were only down three at 34-31.

The second half saw Boston College start to get offensive production from their big men. Jared Hamilton’s three-ball from the right corner put the Eagles up by six 37-31. Five quick points from Herren expanded the lead to nine at 45-36 with 16:16 to play. Hamilton gave the Eagles their first double-digit lead at 47-36 with 15:16 to go.

Fairfield would not go away as their three-point shooting (14-40) kept them within distance of the Eagles. But in the end, they would not have any defensive answers for the Eagles guard trio. That, despite having a whopping advantage off the bench (35-0). Bowman who heated up in the second twenty minutes along with Herren and Tabb kept making shots when the Eagles needed it.

The closest the Stags got in the second half was four at 71-67 on another Whipple three. Boston College would score the final six points of the ballgame on a Popovic dunk and four free throws made by Bowman. The final score from Conte was Boston College 77 Fairfield 67.

After the game, Christian once again said: “his team needed to get healthy”. On both Chatman and Mitchell, the coach reported they are both day to day. He went on to say with the way the schedule has been set up “we have not had a lot of practice time”.

Chris Herren was asked about his back to back starts. He said the game “is starting to slow down for him”. He still needs to work on his focus on the court. Both he and his coach agreed it’s a work in progress.

Fairfield received ten points from Jesus Cruz. Both teams are off until Saturday and both will be on the road. Fairfield will be at UNH while Boston College will play at DePaul.