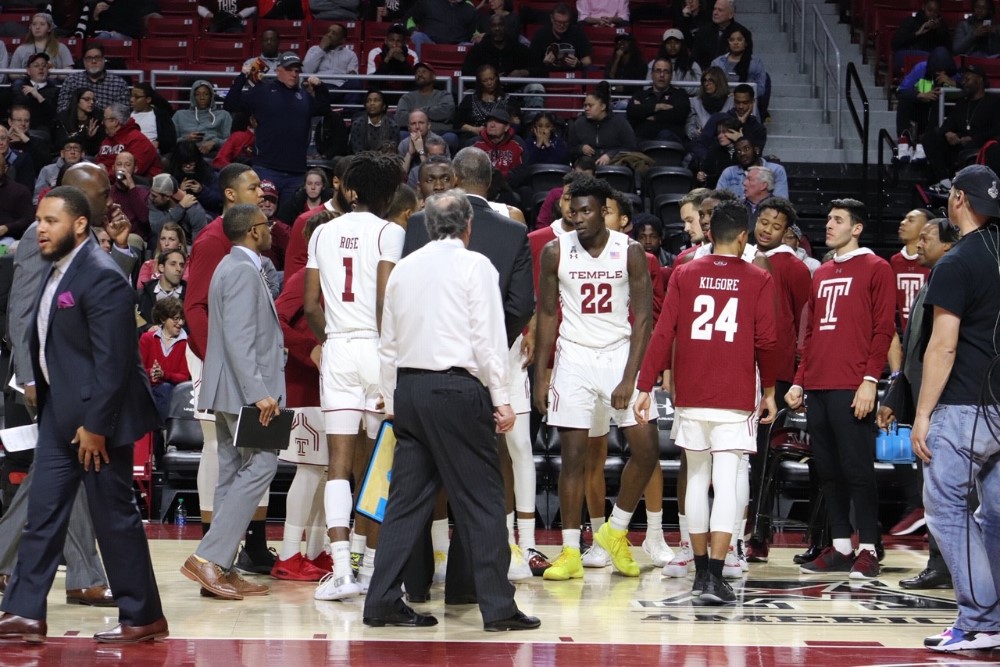 The 7-2 Temple Owls hosted the 6-4 UMass Minutemen in a mid-week showdown. It was the Owls who defended their home court and got their fifth straight win at home to remain undefeated at the Liacouras Center this year.

The game got out to a slow start, with very low scoring in the first ten minutes. However, both teams found ways to score before the half was up. The Owls were certainly not helping themselves, as they had several offensive fouls that gave UMass the sole possession of the momentum. The Owls committed a total of nine fouls in the first half.

The Owls found themselves trailing at the half, 37-27. The Owls were led in scoring by Shizz Alston, Jr. who had 18 points in the first half. On the opposing side, the Minutemen shared the wealth, but it was Jonathan Laurent who led in points at the half with eight. The UMass bench did the most damage, not only scoring 20 points but rallying their team to get out to a good lead.

Temple struggled to find help outside of Alston. The rest of the team combined for nine after one half, and more notably, Quinton Rose was on the bench for a lot of the first half as he was only in for seven minutes.
In the second, the Owls came out of the gates hungry for the lead, as they scored a few fast break points to cut the lead to five with 16 minutes to play. They continue to play with a second wind of energy and retook the lead, 43-42 with 13 minutes left.

After that, under leadership from the senior, Shizz Alston, the Owls were able to stick with UMass. Alston added 13 second-half points and ended the contest with 31 points.

He touched on his scoring ability so far this season.

“It’s a credit to my teammates, just trying to win as many games as possible,” said Alston. “Just trying to do whatever I have to do.”

Temple was able to clean up the foul trouble that plagued them in the first half, as they only committed seven fouls in the final half.

The Owls led by three, 56-53, with just under four minutes to go. Coming out of a timeout, the Minutemen cut the Temple lead within one. A moment later, Ernest Aflakpui got a huge offensive rebound and put back to add to their lead.

The Owls played stellar defense late and stole the ball twice which led to a fast break score by Rose and one by Alston. This put the Owls up five with 1:15 left in regulation.

After creeping back, the Minutemen were within one once again, but after Alston sunk two late free throws, they led 64-61, with 9.3 seconds left. The Minutemen prolonged the game with free throws but were not able to pull off the win, and the Owls won, 65-63 after a late Alston steal sealed it.

Head Coach Fran Dunphy knows there is more to clean up late in games.

Head Coach, Fran Dunphy speaking to the media after the game.

“We need to do a much better job of closing that game out,” said Dunphy.

Rose ended the contest with 14 points. For the Minutemen, they had three players who each had 12 points, one of which was Luwane Pipkins, the third leading scorer in the Atlantic 10, who was rather quiet in this one.

The Owls improve to 8-2 on the season and are 5-0 at home. The Owls will be going on a road trip, playing at Davidson next on December 15. The Minutemen fell to 6-5 on the season.