The Sixers lost to the Celtics in the second round of the 2018 NBA Playoffs, in what felt like an upset. The Celtics were missing pieces, and many counted them out. Jayson Tatum had other plans, rising to the occasion along with other important players like Terry Rozier and Al Horford. The Sixers young core was not prepared to take down the Celtics at that moment. This season, they are for sure going to be better suited in a potential series against the Celtics. 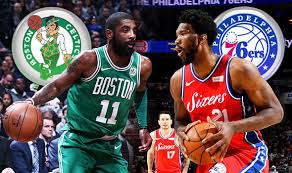 With LeBron now in the West, it leaves the Eastern Conference open for a brand-new team. Two teams that are being mentioned are the Sixers and Celtics, who both have young cores that will have a bright future in the league. The Celtics look better at the moment, but the Sixers potential is there. For Embiid, and Simmons, they would love to rise to the occasion and dethrone the heavily favored Celtics. It then poses two questions:

1. What are the Sixers missing that the Celtics already have?

2. What can take the Sixers to the next step?

The answers are not that easy to predict. The Sixers did not have a great offseason. They missed out on LeBron, Kawhi Leonard, and even had a player commit and then fake an excuse just to avoid joining their team. They also lost two veterans in Marco Belinelli and Ersan Ilyasova. Both of those players helped the young team get better in the playoffs. One player they did retain, JJ Redick, will continue to be the veteran guy that they need. Also acquiring Wilison Chandler and Mike Muscala can aid them this year.

“The Process” is about growing the young players and turning them into top-tier players. Joel Embiid and Ben Simmons are great products of “The Process” and the Sixers goal for this season should be to continue to grow other young guys. There is no doubt that Simmons and Embiid could be All-Stars, however, many people need to be further convinced about Markelle Fultz. Fultz is a guy who could have a breakout year and surprise a lot of people. He has been working with NBA Trainer, Drew Hanlen and his shot is looking majorly improved. The Sixers also have a few young guys that can develop into key role players. Furkan Korkmaz and Jonah Bolden are newer additions to the team after being drafted and stashed overseas. Korkmaz came off of the bench last season and Bolden is coming over for his rookie season after being signed this offseason. All of those guys are going to be the future of the Sixers.

Beating the Celtics is not going to be easy, however, the Sixers have a lot of great players. Losing out on bigger names might actually work out in their favor. They will now be able to develop the young guys to the fullest. The Sixers still have Saric, Covington, McConnell, and Redick, some of the key role players from last year. They have also added a few new faces via the draft. One of which, Zhaire Smith, has a foot injury and there is no timetable for his return, the other Landry Shamet is expected to contribute off of the bench. Even if these guys do not contribute at all, the Sixers are fine with the current team they have. The Sixers can easily compete with any team in the league if Markelle turns out to be the third superstar on the team, and with the streaks of hope he showed, he will surprise a lot of teams.

The Celtics are expected to only get better this season, with the return of Kyrie Irving and Gordon Hayward, however, this could create problems with players’ playing time. The Sixers can improve with their growth, which will help them take down the Celtics.

Answering both posed questions, the Sixers are not necessarily missing anything that the Celtics have. The Celtics are just a few years ahead of them. The Sixers have young, raw talent, and the Celtics just have more experienced players. In the series last season, the Sixers had a better team, yet showed their inexperience greatly. The Celtics, on the other hand, played like a team who had been to the Finals already. This year, if they face off in the playoffs, the series will be a lot closer because the Sixers should be more prepared.

Answering the other question. The Sixers need a few things to improve in order to beat the Celtics. They need to outplay and more importantly, outcoach the Celtics. Brad Stevens is a great coach who straight outcoached Brett Brown. Outplaying them is going to be hard, especially with their depth and experience. Overall, the Sixers team needs to improve in high-pressure situations and they will be fine. Looking back on the series last season, the Sixers lost the first game by 16, which they then made adjustments. Game two they lost by five, lost by three in the third game, won game four and then lost by two in game five. All of these games were nail-biters, and the Sixers had a lot of mental errors in these games. Ben Simmons showed that he was a true rookie and made a few mistakes as well. These things happen when you have not been to the playoffs and the other team has. Cleaning up the mistakes will make things even closer. If they grow as a team and as individual players, a series with the Celtics should produce a different outcome.