Boston College has won three consecutive ACC games for the first time since 2013 following tonight’s 35-3 victory over Florida State. It marked the first win over the Seminoles since a 28-21 victory on Oct. 3, 2009, in Chestnut Hill. FSU had won seven straight games in the series until tonight’s 35-3 BC victory.

Tonight’s 32-point victory for Boston College was the largest in series history for the Eagles. The previous largest margin of victory by Boston College against the Seminoles was 13 in a 20-7 win in the first meeting between the two schools (Sept. 28, 1957).

Boston College scored the most points in school history against the Seminoles with tonight’s 35-3 win. The previous high against FSU was 34 in a 48-34 loss on Sept. 28, 2013.

It marks the first time Boston College has held an ACC opponent without a touchdown since 2015, when the Eagles limited Wake Forest to three points on Oct. 10, 2015.

The Eagles are now 5-4 on the season and 3-3 in ACC play heading into the bye week. Boston College is one win away from bowl eligibility for the fourth time in five years under head coach Steve Addazio.

The last three-game ACC winning streak for Boston College prior to tonight was three straight victories over Virginia Tech, NC State, and Maryland in 2013.

Boston College is 5-11 all-time against Florida State, including a 3-6 mark in Chestnut Hill and 4-10 in ACC play against the Seminoles.

Florida State led for 218:45 straight minutes in the series until BC scored first tonight. FSU had not trailed in the series since the second quarter on Sept. 28, 2013.

Boston College was 4-for-4 in the red zone, scoring three touchdowns on the ground and one via the pass.

The 241 total rushing yards for the Eagles was the second-highest total in a game this season.  The season-high of 364 yards on the ground came at Louisville on Oct. 14.

The last time Florida State failed to score a touchdown prior to tonight was against Wake Forest on Sept. 20, 2008 (12-3 loss).

White caught his second touchdown of the season and second of 30+ yards in two weeks with his first-quarter touchdown reception.

True freshman running back AJ Dillon went over the century mark for the third time in his career with 149 yards on 33 carries.  The Eagles are 3-0 when Dillon rushed for at least 100 yards.

Darius Wade scored his first career rushing touchdown in the third quarter. He came in for an injured Anthony Brown and scored on 4th down and goal from the one-yard line.

Senior defensive end Harold Landry missed the first game of his career with an ankle injury. Landry had played in all 46 career games prior to tonight.

Senior and Florida native Ty Schwab recorded his second career interception in his 44th career game for the Eagles. Schwab finished with a career-best 12 tackles along with a sack and 2.5 tackles for a loss.

Junior defensive back Will Harris recovered two fumbles on the night.  They were the first two fumble recoveries of his career.  In total, Boston College forced three Florida State turnovers.

Colton Lichtenberg converted all five of his point-after attempts.  He missed a 49-yard field goal in the first quarter. 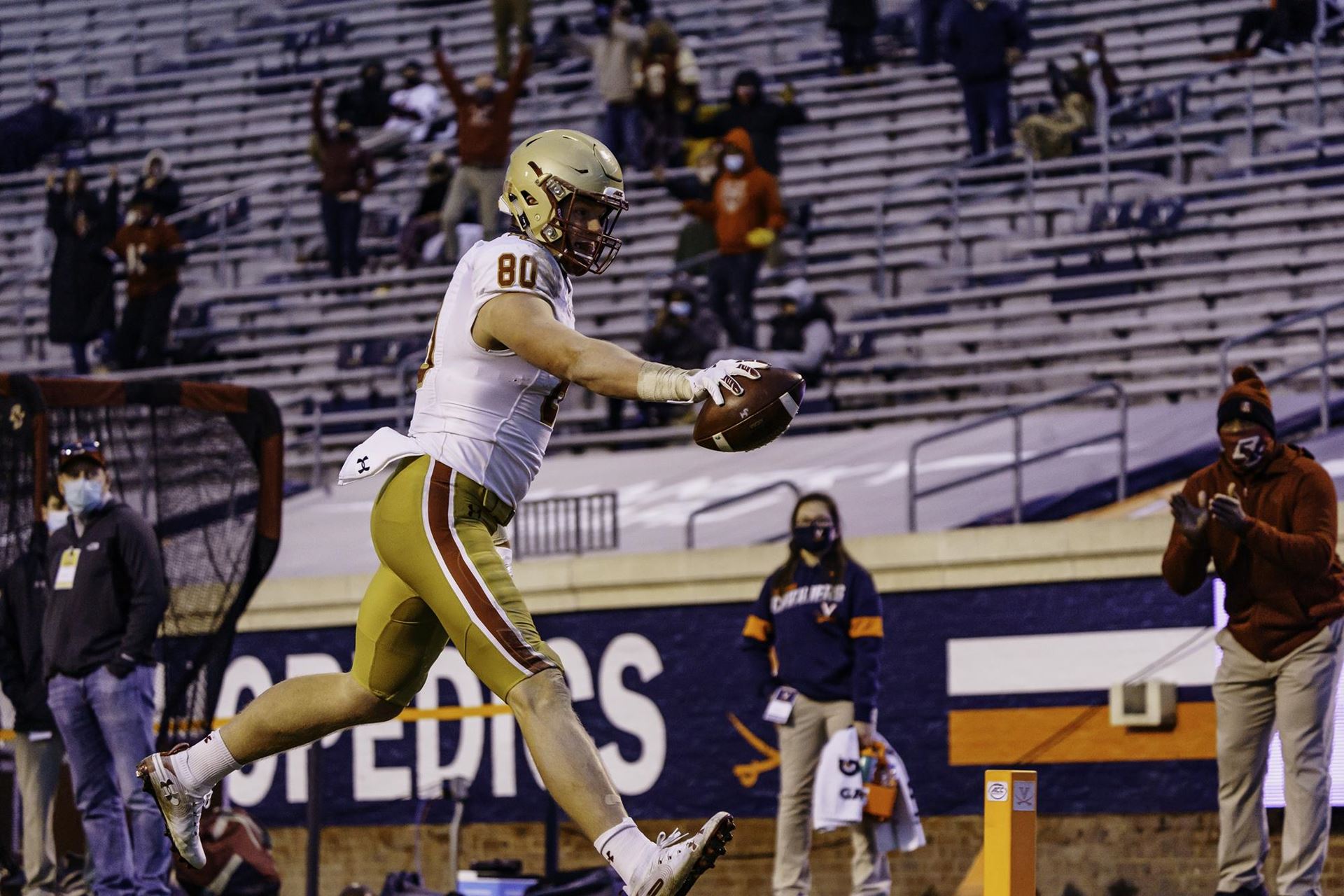