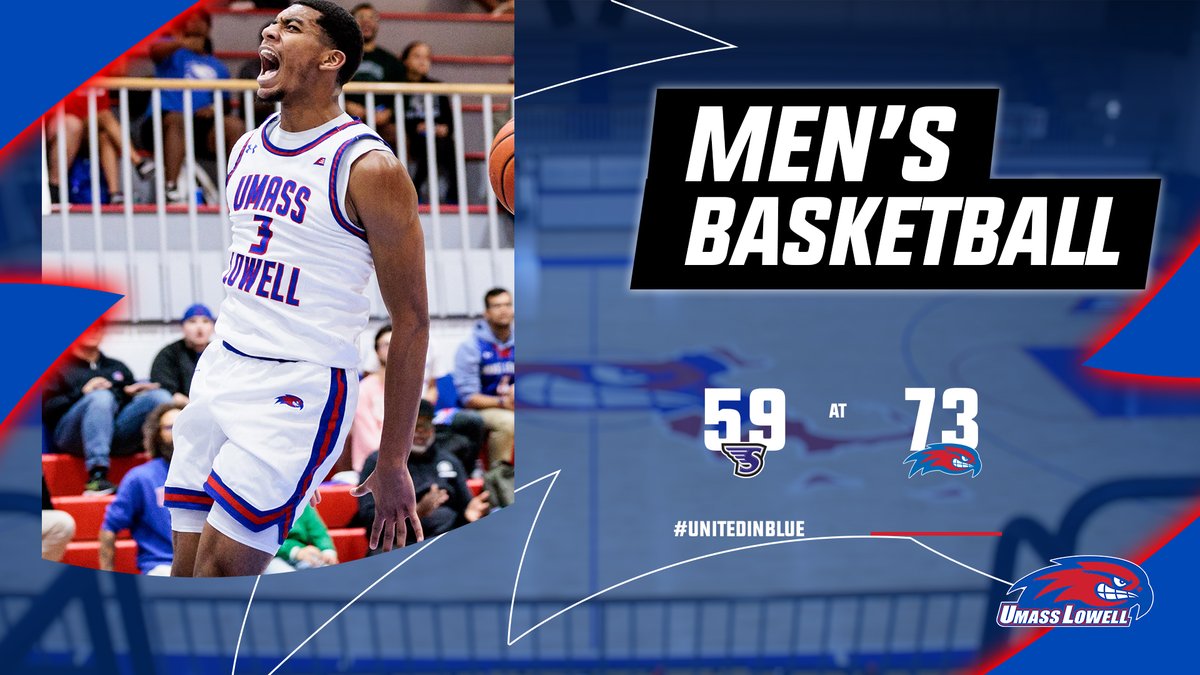 The last time that Stonehill (2-6) and UMass Lowell (6-1) met was back in 2013 when both schools were a part of the Northeast-10 Conference. A lot has changed for both programs with the main difference being both are now division one schools. On Sunday afternoon, they renewed their basketball rivalry with the River Hawks coming out on top 73-59 to push their winning streak to four games. UMass Lowell had five players in double figures and got a strong contribution from their bench (34 points) to get the home win. Afterward, coach Pat Duquette called it “a good win.” Also saying “credit Stonehill for mucking the game up.” He was right as at times, especially in the first half, things did not run smoothly. Because of that, the Skyhawks were able to hang around and make things uneasy for the River Hawks.

After Lowell scored the first five points off the game on an Everette Hammond three-ball (10 points) and an inside hoop from Abdoul Karim Coulibaly (14 points, 14 rebounds, his third double-double of the year), Lowell looked like it was off and running. Not so fast as the Skyhawks would take the lead on back-to-back threes from Max Zegarowski (18 points, team-leading scorer). He would add another bucket to give his team a 10-7 lead with 11:49 left in the first half. An 8-0 run by the River Hawks gave them the lead back at 15-10. Baskets by Coulibaly in the paint, and three-balls by Yuri Covington (11 points) and Quinton Mincey (15 points, 8 boards) did the trick. UMass Lowell would not give up the lead for the rest of the half. The closest Stonehill got to was 17-15 on a three from Thatcher Stone with 8:58 left. Lowell’s lead hit double digits for the first time in the game and the only time in the first half on a jumper by Ayinde Hikim to give his team an 11-point lead at 26-15 with 5:43. From there, Lowell would take a 37-31 lead to the locker room.

After the game, in the post-game press conference, both Quinton Mincy and Yurii Covington were quick to point out how good of a team Stonehill is. Mincy added, “we did a good job of making defense into offense.” Covington was taking good shots because “my teammates were finding me.” Coach Duquette was asked about the Skyhawks becoming a division one school and he believes this will be a good program and maybe faster because the landscape of college basketball has changed since UMass Lowell did the same thing back in 2013. On Sunday, the Skyhawks started four grad students that the program found through the transfer portal. When the River Hawks began their division one run, high school graduates were the way to go. Next up for Lowell is their crosstown rival Merrimack College on Wednesday night at 6 PM. For Stonehill, Sunday’s game ended a six-game road trip. They host Eastern Nazarene College on Wednesday night before heading back out on the road to play six of seven games in the month of December away from home.