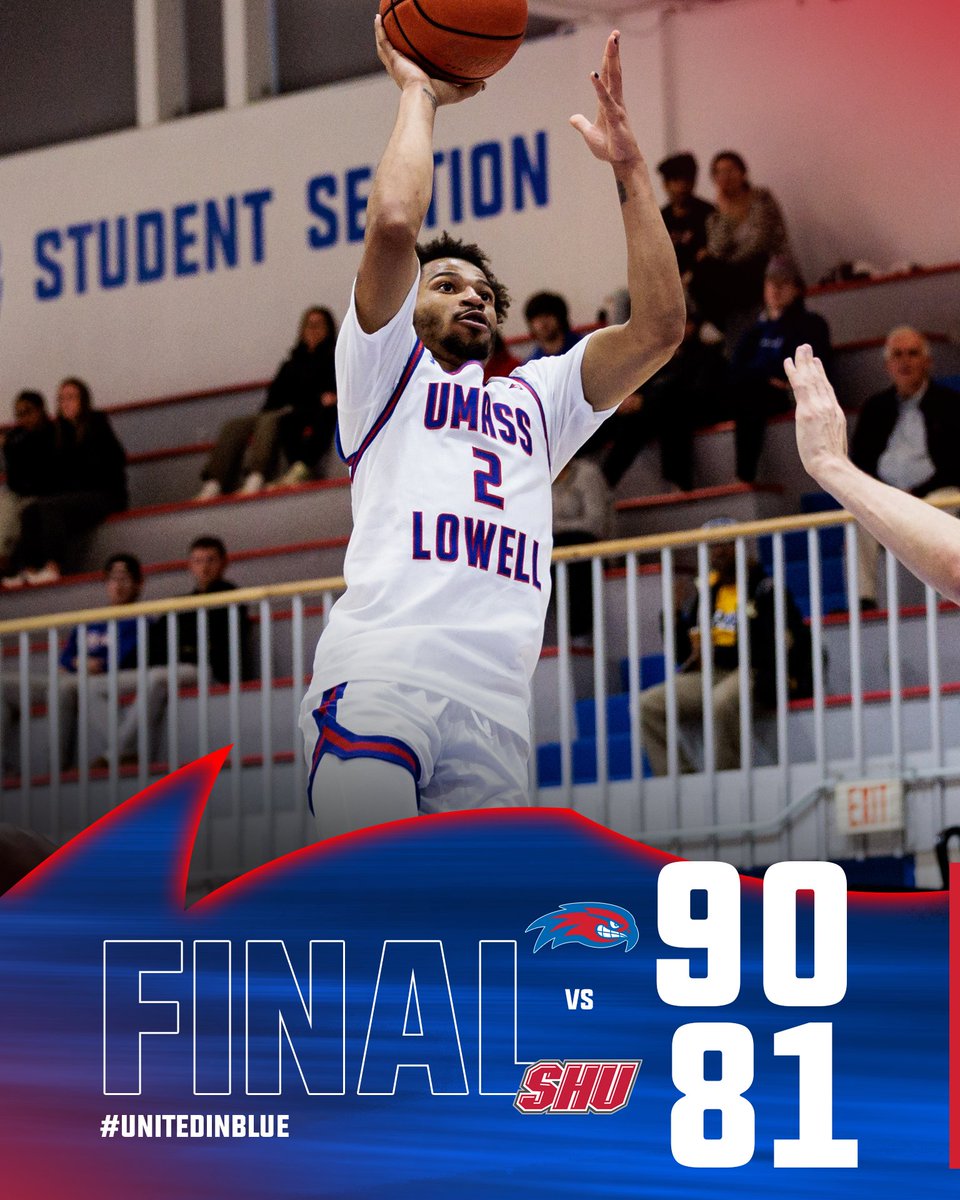 The UMass Lowell River Hawks (3-1) did their part in this MTE on Wednesday night by hosting Sacred Heart (2-2). The event was put together by Rutgers University, the River Hawks went 2-1 in this tournament, as they defeated the SHU 90-81 at Costello Athletic Center. UMass Lowell never trailed in this game. The contest did have three ties, two of them in the second half. Head coach Pat Duquette of the River Hawks, while happy with the win, was not pleased with the defensive effort of his team. After the game, he said “the 80 points we gave up was way, way too many points” The depth of this team was once again on display as five players finished the game in double figures. They were led by point guard Ayinde Hikim who recorded a double-double of 18 points and 11 assists. His willingness to take the ball to the basket all game long helped his teammates put up numbers on the offensive end.

The game started with graduate senior Allin Blunt (15 points, 7 rebounds) scoring UMass Lowell’s first five points of the game. Sacred Heart was able to stay in the first half by knocking down 3-point shots. Thomas Tanner hit a three with 13:53 left in the half to make it a one-point game at 11-10. The River Hawks then went on a 9-0 run to take a 19-10 with 11:45 left. A layup from Blunt, followed by a 3-point play from Mikey Watkins, and a dunk from Max Brooks gave the River Hawks control of the game at that point. Back-to-back layups from Yuri Covington and Watkins gave UMass Lowell their first double digits lead at 23-13 halfway through the first twenty minutes at 23-13.

The River Hawks would push their lead to 16 at 40-24 behind production off the bench from Quincy Mincy who scored 8 of his 10 points on two three and a layup. After the game, Mincy “thanked his teammates for finding him”. His outburst grew the lead to its biggest of the half with 5:36 to play. At this point, it looked like the River Hawks were about to blow Sacred Heart out of Costello. Instead, the Pioneers came back with a 12-0 run of their own to climb back into the game. Joey Reilly had seven of those points on four free throws and a three-pointer. He had 11 points on the night. The run cut UMass Lowell’s lead to six at 42-36 with 1:22 left in the half. The half would end with the River Hawks up by five at 43-38.

A Rasheen Soleman jumper (14 points) and later a 3-pointer made this a four-point game at 50-46 with 16:30 to play. A quick five points from Bryce Johnson (24 points, 13 rebounds) tied the game at 53-53 with 14:35 to play. Sacred Heart was still down one with 12 minutes left on a free throw from Mike Sixsmith. The River Hawks put the game away with a 9-0 run. Hikim and Mincy with layups and Kar Abdoul Coulibaly (16 points) with a layup in the paint were part of 44 points in the paint by the River Hawks. Connor Withers knocked down a three and Lowell had an eight-point lead back at 70-62 with 9:35 left in the second half.

UMass Lowell took care of things from there to pick up their third win of the young season 90-81. Everette Hammond contributed 13 points and eight rebounds Nico Galette had 16 points and seven boards for Sacred Heart. The River Hawks will be back in action on Saturday vs Emerson.