Boston College Gets Ready for #5 Clemson 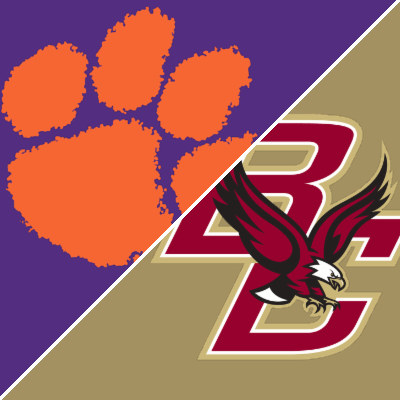 It has been said many times, there are no gimmes in the Atlantic Coast Conference. This Saturday night will be no exception as the Boston College Eagles (2-3,1-2) welcome the #5 Clemson Tigers (5-0,3-0) to Alumni Stadium. Historically, this has been a tough matchup for the Eagles. The size and speed that the Tigers bring with them have been, at times, too much for BC to contend with. Depth has been another issue for Boston College in this series with Clemson. They have players on the bench that could start for many other FBS programs.

The Tigers have won 11 straight games entering this matchup and it’s the nation’s longest active winning streak. They also lead the country in red zone offense having converted all 28 chances they have had this season. With the weapons they have at the ready, it’s no wonder they have been as good as they have been. Clemson is also riding an 11-game win streak in this series and at Alumni Stadium the Tigers are 5-4. The offense is operating at a high clip averaging 41 points per game. They have a very good ground game putting up on average 176 yards a game. This week the ground game could go over 1,000 yards rushing for the year.

QB D.J. Uiagalelei is 104-for-159, 1,242 yards with 11 touchdowns and one interception with an efficiency rating of 152.6. RB Will Shipley can run the ball and has 413 yards gained on the ground. He is also a threat to catch passes out of the backfield with 80 yards receiving. The calling card of this team recently has been their defense. They have allowed just 21 points a game. Teams have had a difficult time doing anything on the ground as the group has only allowed 69 yards rushing per game. Clemson has given up 12 total touchdowns. In the red zone, opponents have a 50% success rate (8-16). The Tigers have outscored their opponents in every quarter with the first (41-13) and the fourth (51-24) being their best. They know how to turn you over as well causing four fumbles and recovering three of them. They have a ball-hawking secondary with six interceptions to their credit. Their special teams are good too with a blocked field goal and two blocked punts on their resume. This team is good across the board.

So how does Boston College pull off the upset? It starts at quarterback with Phil Jurkovec, who last week vs Louisville was on top of his game. He was 18-of-21 for 304 yards and three touchdowns. It was his second 300-yard game of the season and the eighth of his career. The playmakers will need to make plays. That means WR Zay Flowers must have the ball in his hands as often as possible. Last week was an example of what he can do with the rock in his hands. His 151-yard day with two scores performance vs Louisville would be a welcome sight come Saturday night. So too would be a running game that could keep Clemson’s high-powered offense off the field. Freshman running back Alex Brown showed some ability to hit holes and gain yards 83 vs the Cardinals, with a 40-yard TD run.

On defense, getting off the field will be necessary if the Eagles are to have any chance. Graduate LB Vinny DePalma will need a big game. He is first on the team in tackles with 43 and has matched his career-high in the last two games with 11 in each of them. The Eagles’ defense has given up 28 points a game, and 373 yards. Both numbers are rather high. Playing a track meet kind of game vs Clemson is not a receipt for success.

Either way you look at it, this will be a difficult game for Boston College. Many things must go right for them to have a chance. They need to keep the sold-out crown in the game. Take advantage of whatever Clemson gives them which may not be much. Score first, and keep the lead for as long as possible. A high level of football on both sides of the ball will be required if BC is to pull off the upset on Saturday night.