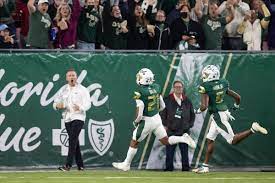 We are approaching the spring football season all around the country. The USF Bulls are looking to turn around a two-win season in 2021. This, I believe, might make or break Jeff Scott as a head coach. He has only won three games in his tenure. Many will point out that 2020 was a pandemic year and that one should not count. This team has the talent to win more than just two games. In the 2020 season, the Bulls, at many times, looked completely overmatched in many of their games. Last year, I saw an improvement where they made just the wrong mistake at the wrong time. One of the best parts of the season was seeing them win their first conference game since 2019 last year. So far it looks good on the recruiting class and the transfer portal has been good to USF.

We all know that many do not consider special teams a vital part of the game. I believe it is when it comes to kick and punt returns as it can turn over the field of possession. If a team gets good field possession after a kick or punt return it could lead to an easy score. On the flip, if you get a good stop on a punt or kick return you could put pressure on the other team. According to Brian Battie, the USF Bulls special teams are looking good this spring. This will help the Bulls this season. I remember in the first year I covered USF in a game versus the Georgia Tech Yellow Jackets they set an NCAA record. Terrence Horne had two 90-plus yard kick returns in the game. The final score was 49-38 and those returns were the difference in the game.

When it comes to the quarterback position many say that it is Timmy McClain’s job to lose. I can see Katravis Marsh as the backup. Bryan Brown and Gunner Smith are the new additions but will not join the team until the fall. This is a key position for the USF Bulls. I think both McClain and Marsh both had a year to mature which will go a long way. They must know when to throw the ball or use their legs to extend plays. If they do not make too many mistakes, then it will lead the Bulls to more victories. The offense needs to be better at extending drives instead of having so many three-and-outs. That will help score more points and not tire out the defense so fast during games. This offense showed improvement through last year and I think will get better in 2022.

The defense will have to make the biggest improvement in 2022 for the USF Bulls. The biggest issue that must be fixed is tackling. In many games last year they missed a ton of tackles. That led to plays being extended and more scoring for the other team. It also did not help that the offense had many three and outs which tired them out near the second half. The team, just like the rest, will get better. If they can solve the tackling issue it will be no problem. I am looking forward to the spring game on April 9th for a 6 pm EST kickoff. I think I will see a better game this year than I did last year. This team is bound to have a better 2022 than 2021 if they can fix the small things this season.

2 thoughts on “USF Bulls: A Look At Spring Practice”