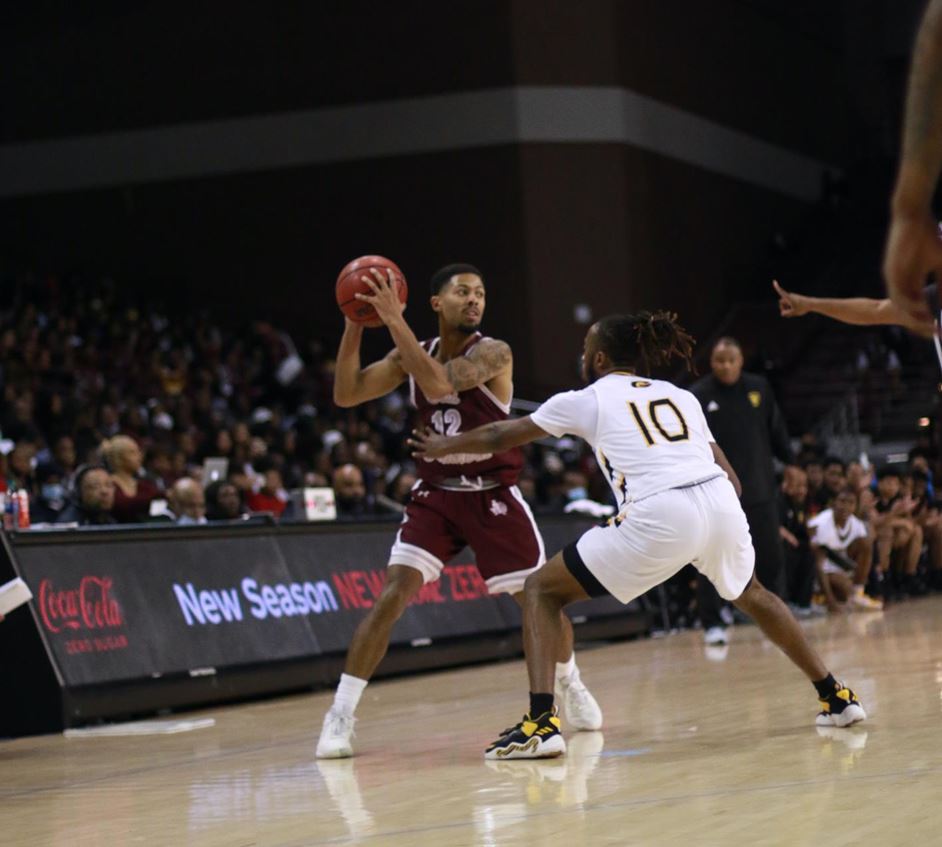 John Jones scored a game-high 15 points off the bench and the TSU Tigers made a big defensive stop in the closing seconds to hold off Grambling State 68-65 Saturday evening inside the H&PE Arena.

History said both teams would engage in a hard-fought affair and it lived up to the billing as GSU would break open a 9-9 tie in the first half with a 9-2 run to lead 18-9 after Chanse Robinson’s basket. With a spirited crowd on hand, TSU would turn to Justin Hopkins to get things going as he scored six points during a stretch that saw TSU go 3-for-3 from downtown. Bryson Etienne also added five points during the stretch as TSU turned a nine-point deficit to a 27-21 lead with 3:29 remaining.

The good times would end for TSU unfortunately as they went 1-for-7 from the field as the half-closed. Grambling State would claim a 31-29 halftime lead behind the strength of a 10-2 run as Robinson was a one-man wrecking crew with eight points.

The second half was back-and-forth and evenly played for the first 10 minutes. Both teams went 7-of-13 from the field and committed six turnovers while recording two steals as the contest was tied at 47-all with 9:36 left.

With everyone on the edge of their seats, the Tigers turned to veteran guard John Jones to liven up the building for the next 3:28. Jones was a one-man machine as he nailed a trio of three-pointers to spark a 15-5 run which gave TSU a 62-52 lead at the 5:08 mark.

TSU would keep pace with GSU from that point as they led by eight (66-58) but GSU would claw back and make it must-see TV live on NBA TV over the final 1:53. A TSU shot clock violation led to a Malik Lamin layup on the next possession. Another TSU turnover led to a GSU layup as the deficit was cut to 66-62 with 1:24 left. In a déjà vu moment again, TSU committed another costly turnover which led to an Eric Parrish steal and dunk as GSU closed to 66-64 at the 1:04 mark.

The Tigers would miss a jumper on the ensuing possession and GSU would go for the gusto as Prince Moss air-balled a three-pointer. However, Grambling State’s Tra’Michael Moton picked up the offensive rebound and Moss was fouled on a shooting attempt with 22 seconds left. Trailing 66-65, Moss missed the second free throw but Shawndaris Cowart picked up the offensive rebound. Moton went for the go-ahead jumper but TSU couldn’t secure the rebound which led to GSU recovering the ball with 11.7 left.

Parrish lost control of the ball after the timeout and Jordan Gilliam recovered the ball and found a streaking Yahuza Rasas for a 68-65 lead with 1.8 left. Moton had a chance to tie the game late but his last-second heave fell short.

Jones led TSU with 15 points and was 5-for-5 from beyond the arc. Hopkins added 15 while Brison Gresham led TSU with eight rebounds and six blocks.

TSU now turns its attention to Southern University on Monday as the contest will have major implications on the SWAC standings as the winner will hold the top spot. Tip-off is set for 7:30 p.m. inside the H&PE Arena.