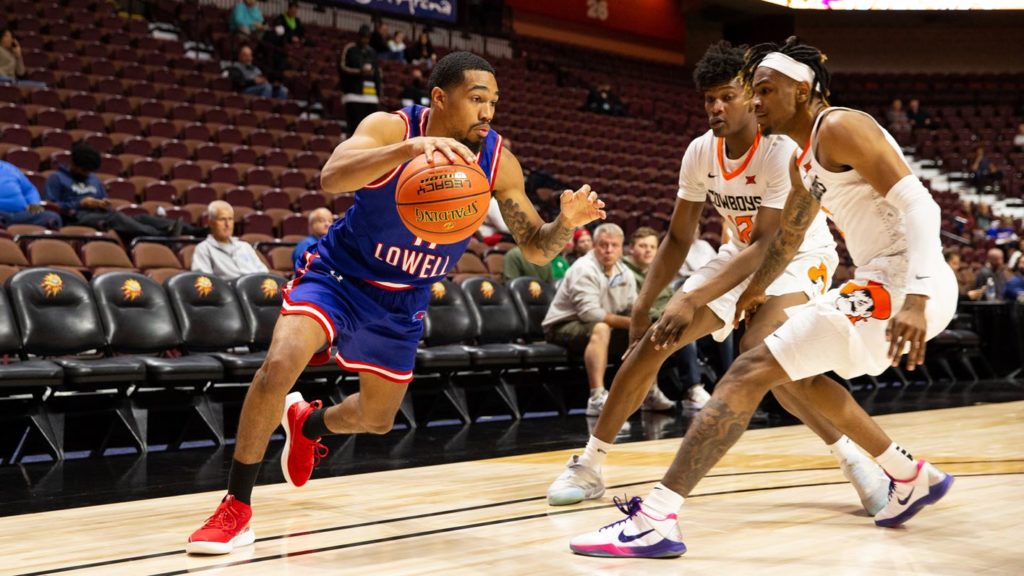 “We faced a really good opponent from a great conference,” said Head Coach Pat Duquette. “It was noticeable right from the start, the level of athleticism and pure size on every possession that they had, and that certainly played a factor in today’s game. I didn’t think we came out the way we wanted to play. We had a little too much one-on-one and I don’t think we had the spacing we needed right at the start. We did some good things, but we have to make sure we play the right way and use space to our advantage, especially against a team like this.”

Although junior Kalil Thomas (New Orleans, La.) drained a long three from the wing for the River Hawks’ first points of the night, the Cowboys got off to a quick start offensively and jumped out to a 16-3 edge with 13:36 remaining in the first half.

Brooks showed his height with a two-handed putback off an offensive board before sophomore Anthony Blunt (Crownsville, Md.) and graduate student John Hall (Philadelphia, Pa.) followed with jumpers to cut the difference to 19-9 halfway through the period.

The Cowboys maintained a double-digit margin until Hammond knocked down back-to-back jumpers and Allin Blunt floated one in from the paint to pull within 24-17 at 5:30. The River Hawks continued to work the scoring area and converted on the half’s final possession, as a triple from Allin Blunt made it a 36-26 game at the break.

The River Hawks continued to pressure and turn turnovers into points, as graduate student Justin Faison (Prince George’s County, Md.) and Hammond combined for five straight early in the second. However, OSU ignited for a 10-0 run to take its largest lead yet, 51-33, with 13:48 left to play.

Another three from Faison put the River Hawks back within 13, but the team was unable to come any closer down the stretch against the Power 5 foe.

The River Hawks will play once more at the Showcase when they square off against Central Connecticut State at 5 p.m. tomorrow, Wednesday, November 17.