Strange Crossover Between Basketball and Wrestling 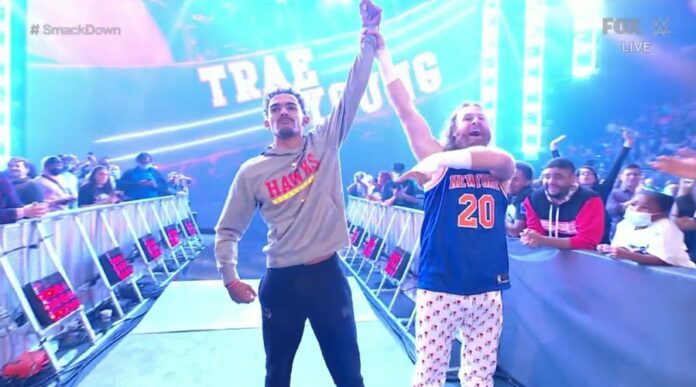 Crossovers can sometimes be unexpected and also a bit strange. Sometimes, they could be one of the most exciting things to happen whether it is in entertainment or sports or anything else. Crossovers in sports have been seen in many ways. A classic crossover was the 1996 film Space Jam, seeing Michael Jordan partner with Bugs Bunny and the Looney Tunes. On Friday, September 10th, basketball fans could’ve seen another crossover for basketball. On Friday Night Smackdown (a product of World Wrestling Entertainment), the show came from Madison Square Garden. In a tag-team wrestling match, one of the bad guys brought out Atlanta Hawks point guard Trae Young. The New York crowd immediately erupted in boos as the memories of the New York Knicks’ first-round exit at the hands of Trae Young and the Hawks came flooding back. Young also got involved in the match, which resulted in him being ejected from ringside, with the New York crowd cheering. This is not the first time that the NBA has seen a crossover or appearance with a wrestling company.

Basketball fans of the late 1990s knew there were no stronger teams than the Chicago Bulls dynasty. In March 1997, Dennis Rodman made an appearance on the World Championship Wrestling show Monday Night Nitro. During this appearance, Rodman aligned himself with wrestling legend Hulk Hogan and the New World Order, the most recognizable faction in wrestling history. Rodman would appear for the company again a month after the Chicago Bulls won Game 6 of the 1997 NBA Finals. At the Bash at the Beach pay-per-view, Rodman would tag with Hogan in a losing effort. This would not be the last time that Rodman appeared in World Championship Wrestling. During his infamous ‘48 hour’ vacation, Rodman skipped practice following Game 3 of the 1998 NBA Finals against the Utah Jazz and appeared on Monday Night Nitro again. He would attack wrestler Diamond Dallas Page with a steel chair, which would set up a tag match for the company’s July pay-per-view. Page would have a partner for the match that Rodman was very familiar with, Utah Jazz forward Karl Malone. A month after playing against each other in the NBA Finals, Rodman and Hogan would win a tag match again against Malone and Page at the 1998 Bash at the Beach pay-per-view. Rodman would compete in the wrestling company one more time, facing “Macho Man” Randy Savage in 1999.

Another basketball legend that has crossed over into the wrestling world is Shaquille O’Neal. Shaq has made several appearances for wrestling companies. Shaq would appear at the 1994 WCW Bash at the Beach pay-per-view, sitting in the front row after being in a promotional video alongside Hulk Hogan to promote his match that night. Over a decade later, Shaq would serve as the host for WWE’s Monday Night Raw show. By the end of the night, he would be standing face-to-face against the 7-foot giant known as the Big Show, with the matchup being teased for years. That matchup would somewhat happen in 2016 in a battle royal at the WWE’s biggest pay-per-view of the year, WrestleMania. Shaq would be eliminated from the match before he could wrestle his giant foe. Even earlier this year, Shaq would return to the ring. Appearing in a tag match for All Elite Wrestling (a TNT product). The end of the match would see Shaq being put through a table by one of his opponents.

There have been plenty of minor appearances of NBA stars and even owners in wrestling companies. In 1986, legend Darryl Dawkins appeared at WrestleMania 2 as the judge of a boxing match between wrestling legend Roddy Piper and tv actor Mr. T. In 2019, Enes Kanter appeared for the WWE, winning a championship belt and losing it on the same night. Dallas Mavericks’ owner appeared on WWE tv in 2003 and 2009, being put through a table in his latter appearance. Another recent NBA / wrestling appearance took place in 2017. The appearance would be freshly drafted Lonzo Ball, along with father LaVar Ball and brother (and future NBA Rookie of the Year) LaMelo. In this now infamous tv segment appearance, the ball family would be interviewed by wrestlers before things got a little out of hand, to say the least. LeBron James even had an appearance on WWE Monday Night Raw during his rookie season. 2021 NBA Champion Giannis Antetokounmpo made an appearance for All Elite Wrestling in late August, receiving a championship belt from the company.  While these appearances are unexpected and usually surprising, there is no doubt that we will see more crossovers in the coming years.