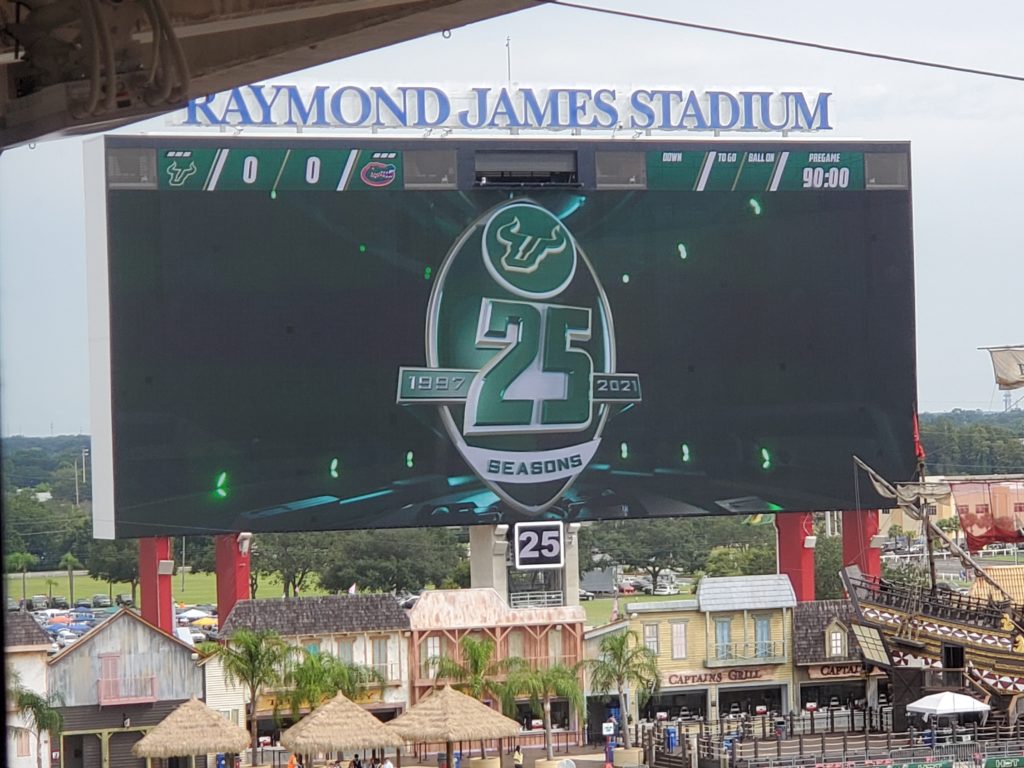 Under a sold-out crowd and overcast sky at Raymond James Stadium, it was the matchup between the Florida Gators and USF Bulls. Coming in seeing tailgating again was great after the Covid-19 last year when it was not allowed. The biggest thing you noticed right away was how many Florida Gators fans there were compared to USF Bulls fans. For the home fans, it is hard to see when the home team is outnumbered by the road team. One of many things that USF needed to happen was to get on the scoreboard. They were unable to do that last week against the NC State. Head coach Jeff Scott was going to try and get his players hyped for a game like this. The Bulls have were given no chance to win this game. He needs to tell them to play and have fun because you never know what might happen.

Let’s not forget too that it was the 20th anniversary of the 9/11 tragedy. The Florida Gators wore helmets and shoes to honor the people that were lost on a terrible day. The USF Bulls were wearing stickers on their helmets for the same reason. This was the home opener of the 25th anniversary of USF football. Both teams came out to a roaring crowd when the Florida Gators came out, their fans cheered and the Bulls fans booed. It vice versa when the USF came out. The USF Bulls won the coin toss but deferred. No matter what team the fans represented it was good to see fans in the stands. The game was being shown nationally on ABC. This is the first time I can remember seeing fans sitting in the third level of Raymond James Stadium for a Bulls game.

The first half started with a big stop on defense for the USF Bulls. They came out in the no-huddle offense and were able to move the ball some. At one point head coach Scott gambled going for it on fourth down but unfortunately, it did not work. Towards the end of the first quarter, they scored the first points of the season on a 25-yard field goal. Cade Fortin, the starting quarterback for USF, threw one interception. He nearly threw two but the second one was called back due to a Florida penalty. For the Florida Gators, they did everything right having multiple long touchdown passes both from Anthony Richardson. One went for 75-yards and the other 41-yards. Emory Jones did his part as well throwing a touchdown pass and running for a 33-yard touchdown as well. The first half was dominated by the Gators as they went into the half up 35-3.

The second half began with the USF Bulls’ offense struggling after they got the ball. On the flip side, the defense stepped up and got two interceptions from Emory Jones. The second one they turned into the first touchdown of the season and narrowed the margin 35-13. What I liked is the Bulls made a change at quarterback going to Timmy McClain and it looked like the offense clicked. He was at the helm when they scored the touchdown. The Gators offense had hit a little stalemate. The fans cheered as Richardson replaced Jones at quarterback for the Gators. The Bulls’ defense was doing well until Richardson once again did his magic with an 80-yard touchdown run. With just under five minutes left the Bulls got a rushing touchdown to give USF their second touchdown of the season. Now USF was down by 22 points.

Overall, this was a much better game for the USF Bulls as they had more positives than in the game versus NC State. They were able to force two turnovers and turn one of them into a touchdown. The Florida Gators had many big plays on offense that helped them to a win. Look for that next week as they start SEC play against the Alabama Crimson Tide. The Bulls had mistakes and dropped passes that could have been big for them. Coach Jeff Scott will have to make some more adjustments as the FAMU Rattlers come into Raymond James next week. To me, they have been completely overmatched in the first two games. Either way, great game with the Florida Gators topping the USF Bulls 42-20.