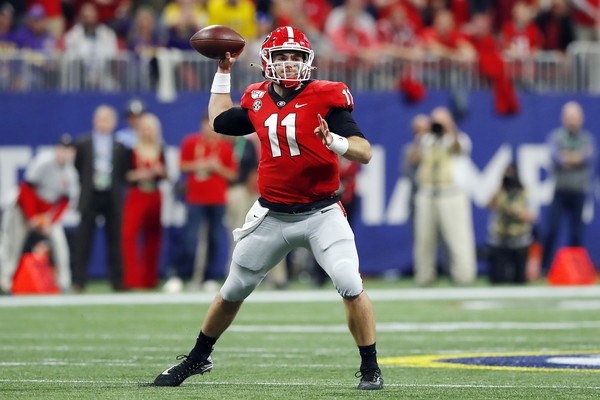 NFL fans and reporters absolutely love what they see from watching film of Joe Burrow (LSU), Justin Herbert (Oregon) and Tua Tagovailoa (Alabama). Another quarterback that could get late first round or second round hype is Georgia’s, Jake Fromm.

What does Fromm bring to the table? He has something that NFL coaches seek right away, throw velocity. Fromm displayed throw power last season. He can throw into tight windows which is a skill that NFL quarterbacks must possess since secondary players can tighten up in man coverage making throws difficult. Fromm has good deep pass accuracy but that needs improvement at the next level. He also needs to work on throws toward the sideline. Fromm can occasionally complete passes under pressure but tends to struggle against some blitz plays. In the SEC Championship game, Fromm struggled early against the LSU defense. Fromm was forced to make throws under intense pressure and he missed on some of those throws.

Fromm does not seem to be a scrambling quarterback. He is a pure pocket passer and has an excellent pocket presence. He will need great pass protection as he could struggle if he encounters blitzes. He needs to work on using his feet and becoming a more mobile quarterback when plays break down. His footwork needs improvement as well. He needs to plant his foot forward when passing. He tends to throw passes with his feet spread apart. He probably won’t get away with that in the NFL. Fromm possesses good throw mechanics though. If he works on correcting his footwork, he can be a really good starter in the NFL. He knows when to throw with some heat and when to throw touch passes.

He may be a project in the preseason. If a team wants him to start right away, he will likely struggle for the first three games. Once he gets his experience level up, he could turn into a dominant starting quarterback with a little bit of fine-tuning.

His numbers will make fans and reporters doubt his ability. He threw for 2,860 passing yards (46th), 24 touchdowns (tied for 28th), and five interceptions (fifth). Teams probably won’t have to worry about Fromm throwing many interceptions. It’s easy to dismiss Fromm as a first or second-round pick based off of the stats but the game film proves he is better than the stats indicate. Some fans may debate a first or second-round projection by making the argument his numbers devalue his draft stock. Based on the numbers alone, he looks to be a fifth or sixth-round pick. However, true experts look beyond the numbers. He is 6’2″ so he can see over offensive lineman.

My 2020 Draft Projection:  Early to middle second round