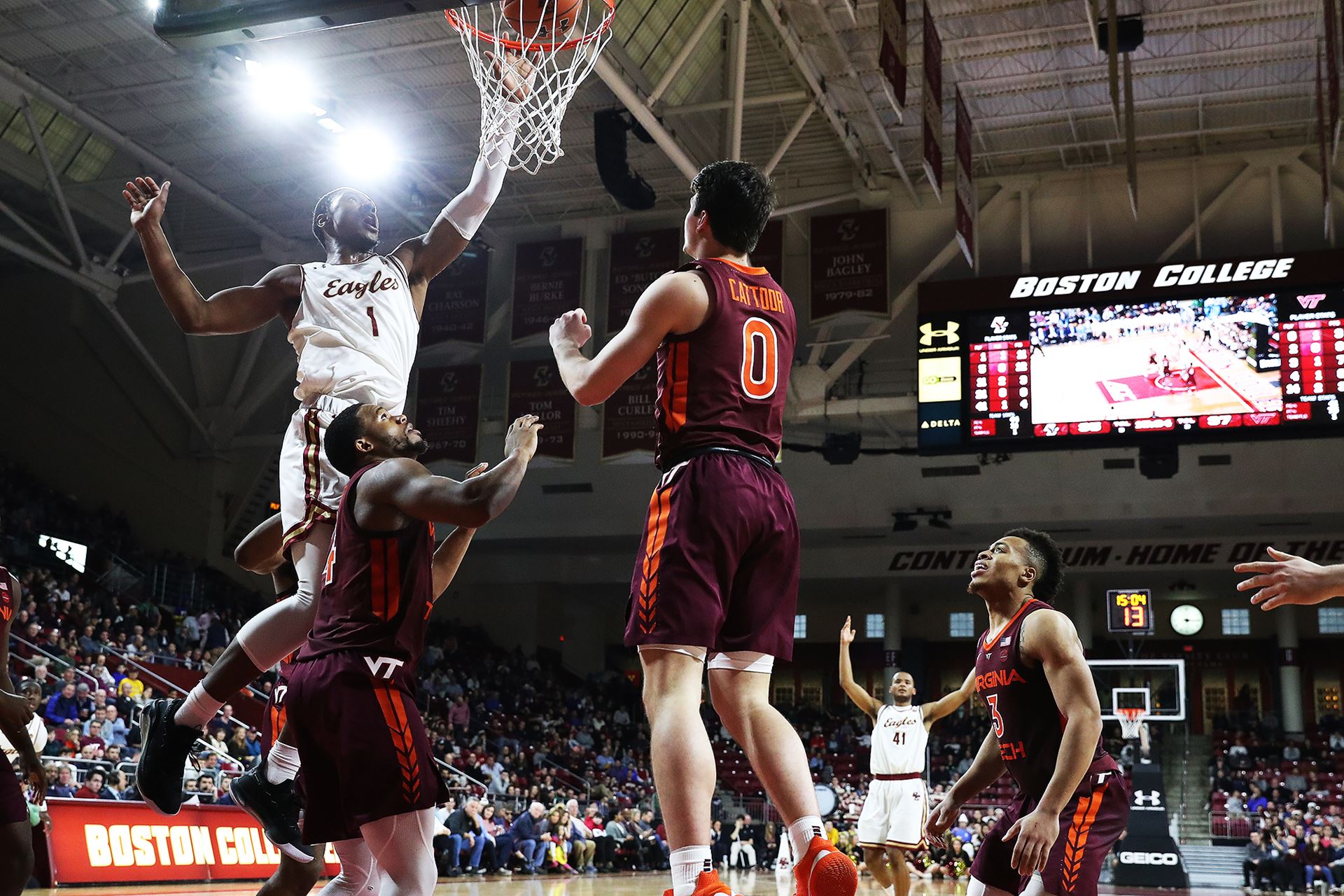 Boston College returned home on Saturday afternoon after a three-game road trip that had its bumps in the road. The Eagles, (4-5 in the ACC, 10-10 overall) were looking to get things back on track. They found different ways to accomplish this at home vs Virginia Tech ( 5-4 in the league, 14-6 overall). First, the Eagles did not shoot the ball well at the foul line going 11-for-27, 40% for the game and 0-of-5 in the first half alone. But what they did do well was play defense against a team that BC head coach Jim Christian said: “was a really good offensive team.” In fact, BC’s defense held Virginia Tech’s offense to 16 points below their average of 72 points per game. The Eagles also got a career-high 23 points from Jarius Hamilton on 7-of-11 from the field, 5-of-7 from three, and even more importantly, a perfect 4-for-4 from the foul line. Boston College got a big win at home, 61-56 over Virginia Tech.

On the other side, Virginia Tech’s head coach Mike Young was not happy with his team’s play on Saturday. He said that “the ball movement was horrific, and player movement was poor.” He was really not happy with more turnovers (14) to assists (11). Despite a young team that coach Young is working with, he was not willing to let them off the hook for the poor performance. The Hokies led in almost every team stat when the game was finished. The most notable was the bench points, a 32-10 advantage on Boston College. On Saturday, the Eagles just found a way to pull out the win leaving coach Young to wonder why.

Boston College started the first half off in good shape. Back to back three-point makes from Jay Heath, 15 points on 5-for-11 shooting, 2-for-5 from three, 3-of-8 from the line, and Hamilton gave BC an early 6-0 lead. The Hokies took the game away from the Eagles on the strength of three-point shooting. Three in a row from deep gave Virginia Tech a 17-10 advantage with 12:47 left in the half and forced Christian to call time. The Hokies increased the lead to double-figures on another three-ball by Wabissa Bede to make it 22-12 Virginia Tech with under eight minutes left in the first half. BC whittled the lead down to five at the break, 31-26, by outscoring Virginia Tech 15-8 over the final 6:14 of the half.

In the second half, BC tightened the screws on defense which allowed the offense to get back into the game. They cut it to one on a Heath layup and it was 33-32 with 17:22 to play. They tied the game at 35-35 on a Derryck Thornton three-point jumper with 16:24 to go. On three different occasions, Tech jumped the lead back to six. The last time on a Nolley II layup for a 46-40 lead with 8:23 to play. Nolley II had 15 points on the day as he went 7-for-17 from the field, 1-of-2 from deep coming off the bench for the Hokies. He got help off the Hokies bench from Nahiem Alleyne who contributed 10 points. The duo had 25 of Tech 32 bench points for the game. BC took the lead on a couple of free throws by Hamilton and it was 50-49 with four to play. They would take the lead for good on Jared Hamilton jumper in the lane at 52-51 with 3:23 to go. Down the stretch, the Eagles made things difficult for their coach and the fans by making only 4-of-8 from the foul line in the closing minutes. The misses at the line kept Virginia Tech in the game, but they could never take full advantage of it. The final score from Conte Forum, BC 61 Virginia Tech 56.

Jarius Hamilton talked after the game about working on his shot. With the help of his coach he found he was not following through. On Saturday, he did and it paid off for the Eagles. As is the case in the Atlantic Coast Conference, the road never gets easy. On Wednesday night, Boston College will welcome #8 Louisville Cardinals to town for a 9 PM tip-off.