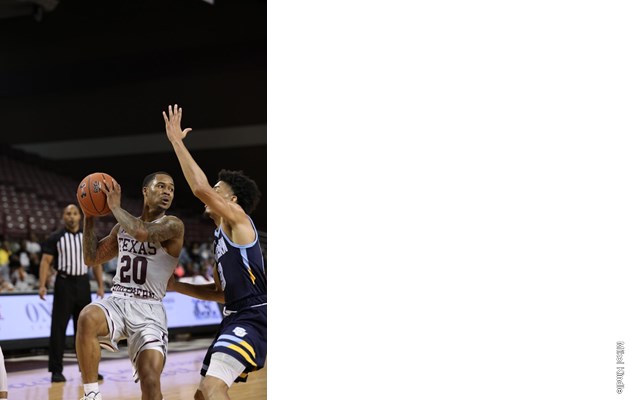 Grambling, La. – TSU dug deep and came up with a solid defensive performance in the second half along with 17 points from Tyrik Armstrong off the bench as the Tigers defeated Grambling State 68-61 Monday night inside the Hobdy Assembly Center.

With three of the past four games between both teams decided by one point, Monday night was headed down that same road as both teams were neck-and-neck to begin the game. Each team claimed a four-point lead in the half with GSU holding the final one with 4:21 remaining. TSU would miss the layup on the ensuing possession and avoided further trouble as GSU missed back-to-back baskets right before the final media timeout. TSU came out of the timeout with a big play as Eden Ewing drove the lane for a dunk off a pass from Justin Hopkins for a 23-21 GSU lead.

GSU would hold on to the lead over the next two minutes but freshman Ja’Mare Redus went coast-to-coast for the score and finished off the three-point play with a free throw for a 27-25 TSU lead with 1:15 remaining. GSU’s Ivy Smith, Jr. answered with a bucket nine seconds later but TSU would move back on top after a pair of free throws from Justin Hopkins with 48 seconds left.  Grambling State tied it back at 29-all on the following possession as the score remained tied at halftime.

The Tigers would come out on fire to open the second half as they went on a 14-5 run within the first five minutes to lead 43-34 after Tyrik Armstrong’s steal and layup. Hopkins jump-started the run with five points while the TSU defense forced two turnovers and held GSU to only 2-of-5 shooting during that span. However, Grambling would respond with a 6-0 run to draw within 43-40 two minutes later but the defense stood ground and forced two GSU turnovers while going 4-for-4 from the free-throw line to push its lead back to 49-40 at the 11:36 mark. TSU was its own worst enemy after the run as they committed four turnovers over the next two minutes which allowed GSU to draw within 49-46 as they took advantage of the free-throw line.

With 8:12 left, Ewing’s bucket ended a four-minute shooting drought by TSU as the Tigers went on an 11-6 run to lead by double-digits 60-49. Armstrong was all the Tigers needed during the surge as he scored seven of the team’s 11 points while the defense held GSU to 1-of-5 shooting. Grambling State would draw to within five over the next two minutes but TSU shot 8-of-10 from the charity stripe to keep GSU at bay. The Tiger defense also kept Grambling State in check from the three-point line as GSU finished 0-of-8 in the second half.

Texas Southern’s next game is Saturday, Jan. 25 versus Mississippi Valley State. Tip is scheduled for 7:30 p.m. inside the H&PE Arena.