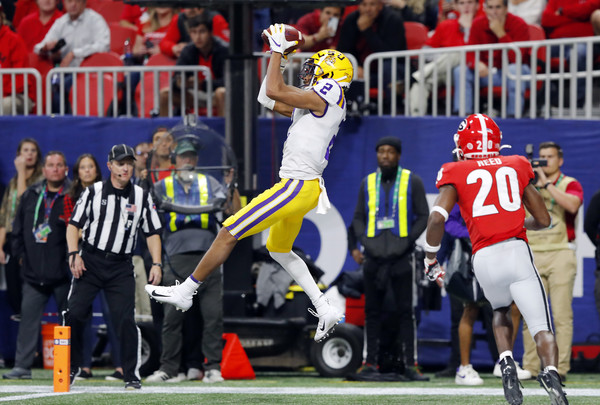 0
Read Time:1 Minute, 54 Second
NFL fans usually pay attention to the top tier prospects like Alabama’s Jerry Jeudy and Oklahoma’s Cee Dee Lamb. However, there are other receivers that NFL fans may want to watch some film on. One receiver that could make an impact right away is LSU’s, Justin Jefferson. Here is a look at his 2020 NFL Draft profile.
What is so special about this 6′ 3″ receiver? Why isn’t everyone hyping him up like Jeudy and Lamb? Jefferson doesn’t possess deep threat speed and he isn’t as strong as he needs to be. There are a few skills that Jefferson has that teams will like.
Jefferson is a smooth route runner much like New England’s Julian Edelman. Quarterbacks really like smooth route runners and these receivers typically become their favorite pass catchers. Jefferson can catch any pass. It doesn’t matter if a quarterback throws low, high, by the sideline, or in a corner because Jefferson will find a way to catch difficult passes. Just throw the ball to him and he will find a way to make any catch. He can make those miraculous “highlight” or “circus” catches. Jefferson has a lot of athleticism. He caught 111 passes (first in NCAA), for 1,540 yards (third in NCAA) and 18 touchdowns (second in NCAA).
He will not start out as a number one receiver on any depth chart as he is not fast or strong enough to secure a number one spot. He could be a solid second or third receiver on most team’s depth charts. He needs to show teams that he is a workout warrior. If he can develop more strength, he can be a number one receiver. It just won’t happen in the first few months of the season. In fact, it may take one or two full seasons for Jefferson to become a number one receiver.
Teams that are deficient in the red zone will want Jefferson. He has the height advantage to cause mismatches in the end zone. He has the potential to tally more than six touchdowns in his first season. How many times will the quarterback throw to him in his rookie season? He may not have many opportunities to showcase his skills in his first year, but he could make of the most of them.
Facebook
Twitter
Pinterest
LinkedIn