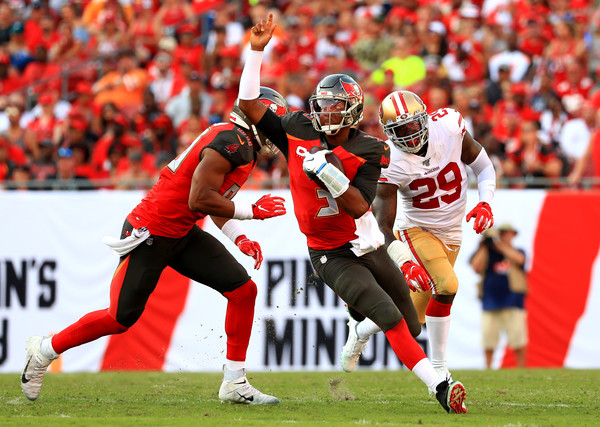 The epic finale of the fantasy football year is here! The few fortunate fantasy football owners are competing for championships and this is the week that puts lineup decisions at the forefronts of everyone’s minds. Some fantasy owners may need to have two weeks of solid decision making depending on their leagues’ playoff formats. There are several players that should have standout performances this week.

1. Jameis Winston- Quarterback- Tampa Bay Buccaneers- Winston is showing consistency and the results are hard to argue. Winston can secure many Super Bowl wins for fantasy owners. If he’s not on your team and on the waiver wire, don’t waste time!

2. Breshad Perriman- Wide Receiver- Tampa Bay Buccaneers- Perriman is another waiver pickup that fantasy owners must get a move on with getting him on their teams. He recorded 87 receiving yards against Jacksonville, 70 receiving yards and touchdown against Indianapolis and 113 yards and three touchdowns against Detroit. Expect Perriman to continue being a stat sheet stuffer against Houston.

3. Miles Sanders- Running back- Philadelphia Eagles- Sanders is on fire right biw! Although he could have done better against the New York Giants, Sanders had two outstanding performances lately against the Washington Redskins (122 rushing yards and one touchdown) and Miiami (83 rushing yards). Sanders is emerging as a big time playmaker. If Jordan Howard misses this week, Sanders will have an even bigger role in the offensive strategy.

1. Todd Gurley- Running Game: Los Angeles Rams Let’s make this simple: The Rams are playing the best defense in the NFL. Any owner who starts a Gurley against the 49ers defense is automatically taking a risk of getting extremely low production.

3. Baker Mayfield- Quarterback- Cleveland Browns- Mayfield is starting to show some signs of improvement but he is no where near being a solid fantasy football starter considering there are so many better options right now. He is going against the Ravens defense so starting any Browns offensive players other than Nick Chubb and Jarvis Landry is too risky.

Emmanuel Sanders- Wide Receiver- San Francisco 49ers- Sanders had a rough day against the Atlanta Falcons only catching only two passes for nine yards. However, fantasy owners don’t necessarily have to bench Sanders based off of one bad game. He had some top performances this year and if he can beat Jalen Ramsey’s coverage, Sanders may have a surprisingly top notch performance considering this matchup.