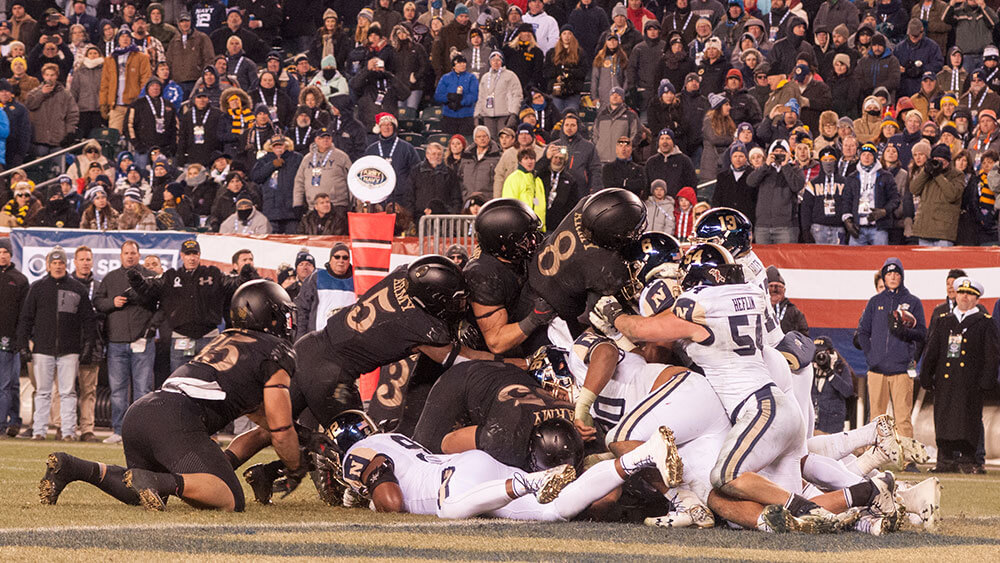 After going with 15 games last week, we are back to our customary ten games in this edition, including the always incredible Army-Navy Game.

Both dad and I went 9-6, which elevated our records, but saw my three game lead maintained for time being. I’m shooting to end this season with a record of 20 games over .500, so Ihave some work to do in the next few weeks. I was at 14 games over vs the odds till I was clubbed for two weeks going 5-15, but hopefully we’re trending upwards after last week.

Happy Birthday to my dad today, and may all his wishes come true, that is, except for beating me this week, as we differ on five out of the ten games!

One of my favorite games of the year. I’d love for this to be at Heinz Field one day. In the 120th edition of the Army-Navy Game, Navy will be hungry for revenge as Army has beaten them the last three years in a row. All of the Black Knights victories were by seven points or less. The Middies are averaging 39.3 points per game this season. Army has rushed for 100 yards or more in 150 consecutive games.

I know one thing, and that’s Tampa likes to play some exciting, down to the last second football. They won’t be making the playoffs, but the Bucs will take care of the free falling Lions who have too many injuries to overcome.

Green Bay may be the most overrated 10-3 team I’ve ever watched. They barely took care of the sad sack Redskins last week, and even at home, I see this game vs the stingy Bears coming down to the wire. The Pack will probably slither away with another win, but it will be by a field goal, possibly OT.

I figured Houston would be in a for a let down after whipping the Patriots, but not getting their collective asses kicked like they did vs the Broncos. Now I see a bounce back game against a hot Tennessee team lead by the resurgent Ryan Tannehill.

Speaking of the Broncos… Drew Lock has breathed new life into the corpse that was Denver. Kid is cocky, that is for sure, but he is backing it up on the field, too. The Chiefs will go to double digits in wins after this one, but it will be a lot closer that 9.5 points, count on that.

Seattle was rolling along until the Rams slapped them back into reality. Now they must travel across country and face a team in turmoil after firing it’s coach. This is a must win game for the Seahawks if they are to catch the 49ers for the NFC West crown, whom they beat earlier this year and are just one game behind.

Cleveland and Baker Mayfield should have enough offense to take care of business vs the Cardinals. Question is, can the Brown’s defense contain Kyler Murray, and a possible revitalized David Johnson, who looked a little like himself last week vs the Steelers?

Kirk Cousins and Dalvin Cook should be able to carve up the Chargers defense and stay one game ahead of the Rams for the final wildcard spot in the NFC.

After an 0-3 start by the Steelers, this is the game where battling and slaying the odds will have it’s payoff. A win here would all but sew up a playoff spot for the Steelers, something no one (but a few, ahem) thought was possible after losing Ben Roethlisberger for the season in week two.