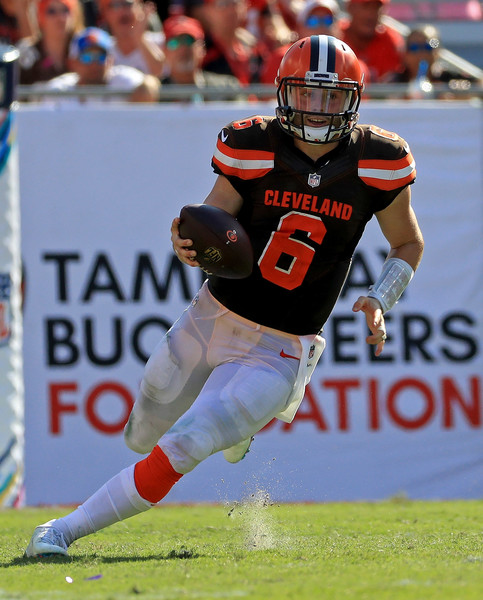 1. Baker Mayfield- Quarterback- Cleveland Browns- This is a popular selection for a must start this week. Mayfield takes on a lackluster defense and has plenty of go-to options to get the Browns offense in the end zone right away. The presence of Kareem Hunt and the bulldozing Nick Chubb takes pressure off of Mayfield as well. The Dolphins secondary has players that aren’t exactly top tier defenders.

2. Odell Beckham- Wide Receiver- Cleveland Browns- Do not give up on Beckham just yet. He didn’t even eclipse 700 yards yet but the Browns will pass the ball to him a lot over the final 6 games. Beckham will take advantage of a weak secondary unit.

3. Le’Veon Bell- Running Back- New York Jets- It’s safe to say most fantasy owners are ready to give up Bell if they haven’t already. However, Bell goes against the Raiders run defense that gives up 105.9 rushing yards per game. Bell is due for a breakout game. He has a touchdown in each of the last two games.

1. Mason Rudolph- Quarterback- Pittsburgh Steelers- Rudolph had a terrible game last week Cleveland. Part of the issue was he lost his main weapons James Conner and JuJu Smith-Schuster early in that game. He threw four interceptions as well. The really bad news is both Smith-Schuster and Conner were ruled out for tomorrow’s game against the Cincinnati Bengals. Many fantasy owners may still take a chance on Rudolph since the Bengals are 0-10.

2. Tarik Cohen- Running Back- Chicago Bears- Cohen struggled the past three weeks. It would be best to bench him.

3. Michael Gallup- Wide Receiver- Dallas Cowboys- Gallup is a monster right now but he is going against the elite pass defense of the New England Patriots. Fantasy owners should find another starting receiver.

Ryan Fitzpatrick- Quarterback- Miami Dolphins- Fitzpatrick torched the Bills defense and he will face the weakened Browns defense. The Browns lost Myles Garrett for the rest of the season. Larry Ogunjobi’s suspension held up. Olivier Vernon was ruled out due to a knee injury and Safety Morgan Burnett is out for the season due to an Achilles injury. Fitzpatrick should have a very strong performance