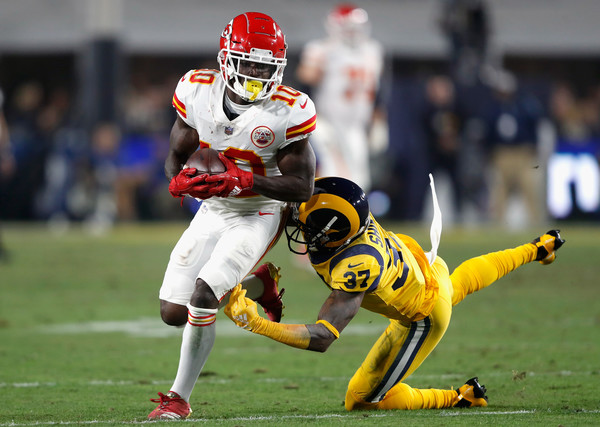 There are matchup problems and some big news that highlight fantasy football Week 6. Here are the starters that are poised to earn lots of fantasy points.

1. Tyreek Hill- Kansas City Chiefs- Wide Receiver- Hill will likely return to play this week after a tough week one injury. If he returns, expect him to have his way with defenses again.

3. Mark Ingram Jr.- Baltimore Ravens- Running Back- Forget the rough day against Pittsburgh. Ingram can rush the ball for at least 71 yards. His highest total was Week 1 against Miami when he ran for 107 yards. The Ravens face the 0-5 Bengals. Everyone knows how this will go.

1. James Conner- Pittsburgh Steelers- Running Back- Conner is not doing anything right now. It’s safe to say that after suffering a season-ending injury last season, Conner is regressing. It’s probably better to think about dropping him from fantasy rosters.

2. Phillip Rivers- Los Angeles Chargers- Quarterback- Sit Rivers? Why sit Rivers when he is having such a big year? He struggled against the Denver Broncos despite the fact that Denver Broncos didn’t win a game until defeating the Chargers. Although the Broncos defense features plenty of playmakers including Von Miller and Chris Harris, Rivers should have played better.

3. Le’Veon Bell- New York Jets- Running Back- It’s safe to say Bell needs to seriously think about demanding a trade if things continue to go South. Bell is on an offense that is in dire need of a rebuild or reload. Bell is not duplicating his Pittsburgh Steelers numbers so it’s best to bench him this week.

Gardner Minshaw- Jacksonville Jaguars Minshaw is the epitome of what fantasy football owners call a fast riser. Forget the lackluster quarterback rating! He threw for 374 yards and two touchdowns against the Carolina Panthers. He’s thrown for 1,279 yards and nine touchdowns. Minshaw took over for the injured Nick Foles.

Also watch out for a second quarterback sleeper, Teddy Bridgewater of the New Orleans Saints.