We are a little over a month away before we find out how the 2018 NBA Draft plays out. This past Tuesday, the NBA held its Draft Lottery and the Phoenix Suns were the big winners by getting the top pick this year. The following teams round out the Top 10.

8. Cleveland (from the Nets)

10. Philadelphia (from the LA Lakers)

Already, the mystery begins as to which player will be chosen number one overall. Let’s remember that very few number one picks go on to make an immediate impact on the team that picks them. Also, let’s not forget that the word “bust” can come out of the top pick from time to time. This year, there appear to be two consensus players that could go No. 1. This is also the year of the Freshman coming out of college basketball.

The first one we will talk about is Arizona freshman C, DeAndre Ayton (7-1, 250 lbs). He is a tall, physical player with good agility. He still has to develop an outside game, and for his size, he needs to be much more of a defensive difference maker. But of course, he is a freshman in college, so he has time for his game to develop and he will make some impact from day one.

Next up is Luka Doncic (6-8, 220 lbs) from Slovenia. For the last three years, there has been so much talk about this kid; he has played for Real, Madrid. At 19, he is well developed and very polished. He has great passing skills and is pretty smooth on the offensive end of the floor. He’s also versatile enough to play either guard spot and has good instincts on offense. 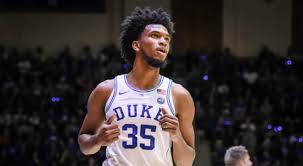 Marvin Bagley III (6-11, 235 lbs) is a  freshman coming out of Duke. He was the ACC Player of the Year and has the potentional to become a rebounding machine at the rate he is going. He has great athleticism and can shoot the three pretty well. He will need to develop physically in order to adjust to the NBA game, but projects to be a star in the making.

Jaren Jackson (6-11, 242 lbs), is a  freshman out of Michigan State who is described as a terror on the defensive side. He has great anticipation of the ball and looks like he will be able to alter many shots around the rim. He is still working on his offensive game and must get bigger and stronger to be successful at the next level.

Mitchell Robinson comes from Chalmette High School. Some compare him to the likeness of Giannis Antetokunmpo. That is a high bar to set for such a young man, but we will see if he can live up to that type of hype.

It will be another interesting sight to see for the NBA to see the future starts come out for their big night. Of course, like any draft, it will take a few years to see what real impact these young men will make on the team that selects them.