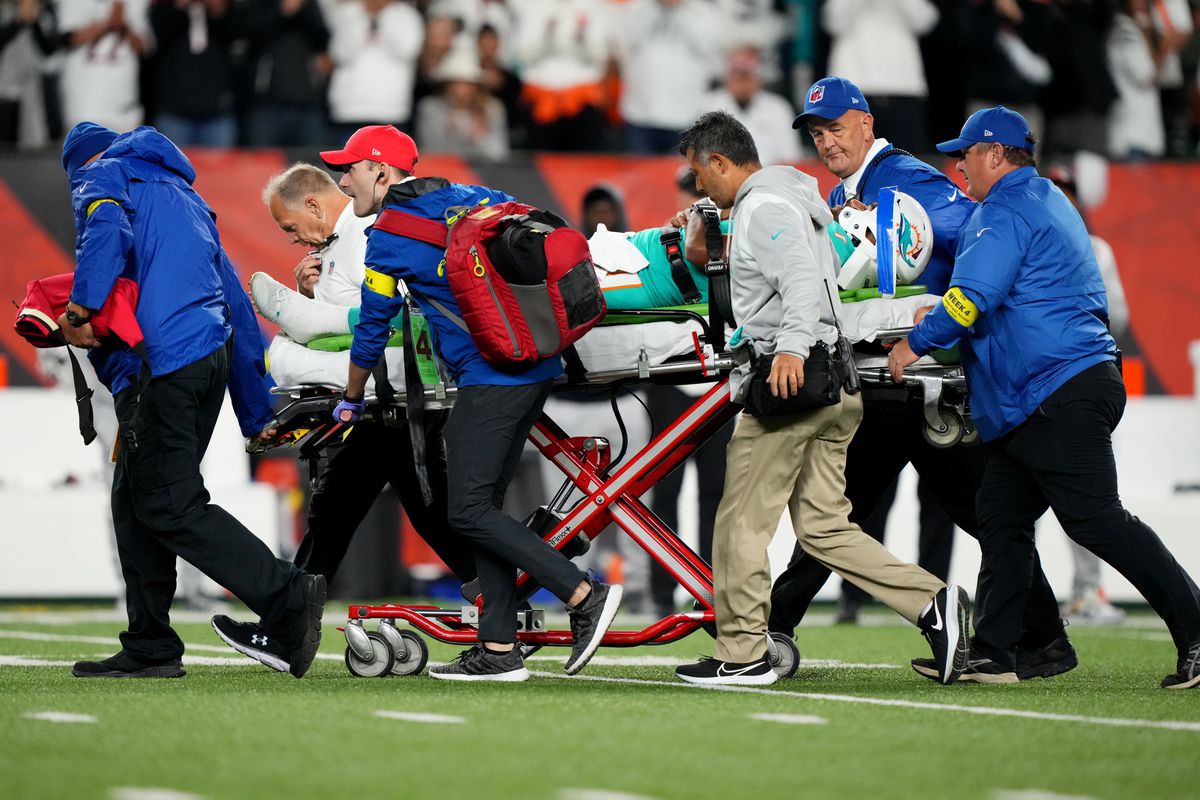 MIAMI- The Thursday night NFL game between the Cincinnati Bengals and Miami Dolphins has a very gruesome moment during the game. Scary doesn’t fully describe the scene that unfolded two nights ago. Miami Dolphins quarterback Tua Tagovailoa suffered what appeared to be a major injury during the game. During this awkward quarterback sack, Tagovailoa was slammed on his neck. As many recalled their social media rants, Tagovailoa’s hands were not in a normal position and his fingers didn’t look right either.

Neurologists are questioning the Miami Dolphins decision to start him just four days after he suffered what appeared to be a concussion in week three. This decision to start him on Thursday Night could haunt the Dolphins in several ways. First, the Dolphins are closer to eventually losing the franchise quarterback to a career-ending injury. In fact, some experts likely believe that Tagovailoa’s career is already over because he can’t take hits like that anymore. Secondly, the NFL Players Union already plans to take legal action against the Miami Dolphins. This could result in major fines against the organization and possible firings of medical personnel. Third, the public relations fallout could hurt the team in terms of fan support.

The Dolphins will take a hit to the organizational wallet. The budget won’t be the same after this. If his NFL career is truly over, then the Dolphins financial resources that they poured into making Tagovailoa the franchise quarterback could be all for nothing. Now, splash moves like the trade for Tyreek Hill will be important to whoever the long-term quarterback is.

However, seeing any player suffer like that on the field is the biggest part of this story. It’s over of those shocking moments that go beyond the dangerous quarterback sack. There will be questions about the steps that lead to the Dolphins ‘ decision to start Tagovailoa. He cleared the concussion protocol. However, it could turn out to be the wrong decision. Now, doctors will very rarely get this wrong. The Hippocratic Oath demands that doctors do no harm. This weighs heavily on the minds of medical school graduates and current medical doctors. This is not something they take lightly so accusations of possible malpractice are not supposed to be common given the fact that doctors don’t just make big decisions lightly. They take in a lot of information and do the best they can with the facts they have. So, we all have to take a balanced approach to public criticism of the Dolphins team doctors. It seems a little hard to believe any of them would get this wrong. However, it’s possible a big mistake was made.

Obviously, the Dolphins would have been better off not starting Tagovailoa at all and should have played it safe regardless of what the doctors said. A head coach can easily justify telling the franchise quarterback that he has to sit this one out. If a coach says he’s doing that for the protection of the franchise quarterback, it’s likely the quarterback will be thankful and appreciate the fact that the organization cares about his health. Would it have been so bad to make a decision on that?

Some NFL fans would have criticized that move too and if Teddy Bridgewater started and lost the vital game against the Bengals anyway, fans and reporters might’ve questioned that too. Bringing the head coach and making decisions is no small task, so we have to take that into account rather than just throw a flurry of accusations against him too.

Even so, the decision to start Tagovailoa was definitely questionable all around. Hopefully, Tagovailoa will be able to keep playing. His season is likely over despite what the Dolphins said. There is movement in his extremities and he is conscious. This could’ve been much worse. It’s possible the criticism of the decision will start to go away if it turns out the damage to Tagovailoa’s body wasn’t as severe as we all thought.

Dolphins’ Head Coach Mike McDaniel said “To be honest, I’m not really thinking about a timetable”. Tagovailoa could go to injured reserve but McDaniel has to wait for more information to come out. McDaniel said Tua has some headaches but his personality was “normal Tua”.

It looks like the Miami Dolphins really dodged a potentially worse-case scenario. Tagovailoa might be able to play again this season but given his history of injuries and the severity of this one, it would likely be wise to put him on injured reserve until next season. Only time will tell.