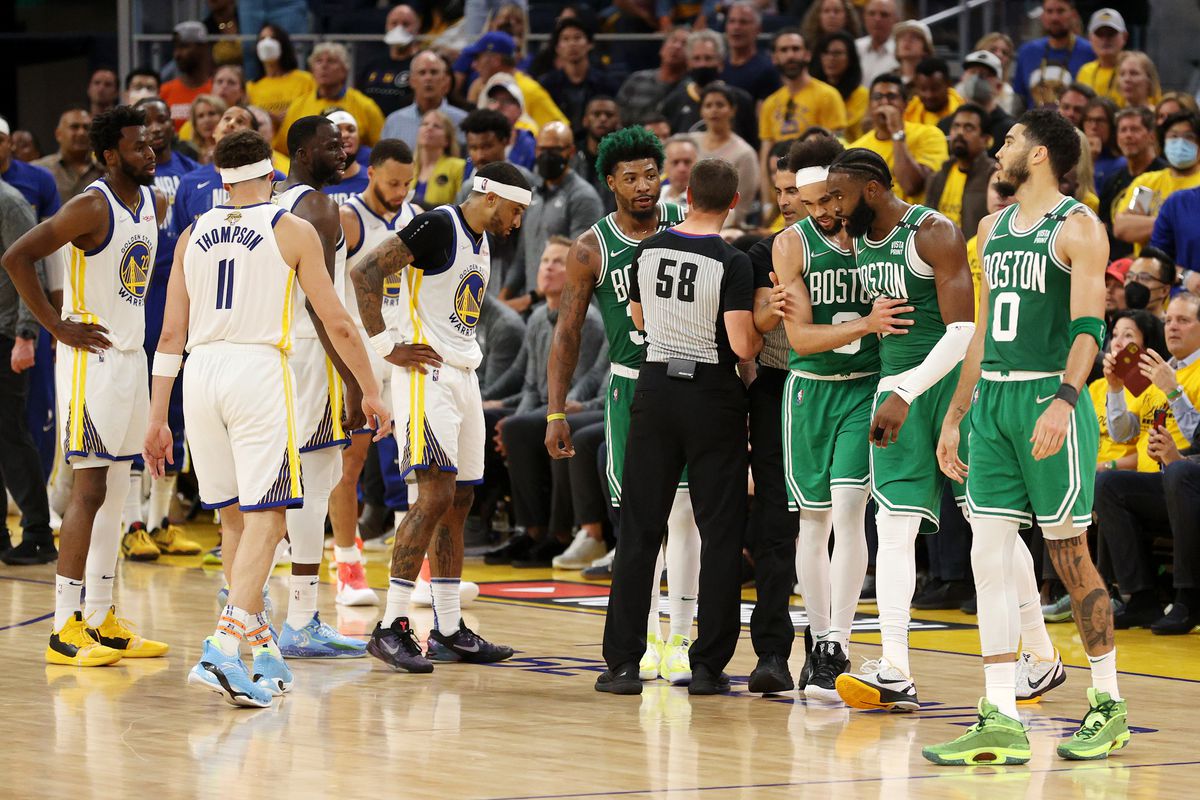 On Wednesday night, the Boston Celtics beat the Golden State Warriors 116-100 taking a 2-1 series lead with a chance to go up 3-1 after Game 4 Friday night in Boston. Jayson Tatum struggled early in the game and found himself in the second half finishing with 26 points. Jaylen Brown had a solid night as well leading all Celtics with 27 points. Defensive Player of the Year, Marcus Smart, was the third Celtics scorer to finish with more than 20 points ending the game with 24 points. The team showed out on the defensive end as well finishing with seven steals and seven blocks leading to 17 turnovers for the Warriors. Boston also out-rebounded Golden State 46-31 leading to both offensive and defensive struggles.

For the Golden State Warriors, Stephen Curry and Klay Thompson came to play but did not see a lot of help otherwise. Steph finished with 31 points, shooting 6-of-11 from the three-point line. Curry appeared to suffer a possible leg injury when diving for a ball late in the fourth quarter. While he played a few more minutes before coach Steve Kerr pulled his starters, the Golden State guard was limping on the court raising the question of what Curry’s status will be for Game 4. Fellow splash brother Klay Thompson was the only other Warrior to finish with over 20 points. Thompson finished with 25 points, shooting 5-of-13 from the three-point line. Andrew Wiggins played 40 minutes (the most of all Warriors), finishing with 18 points. He struggled from the three, shooting 1-of-6. No other Warrior finished with more than 10 points.

Two players who underperformed in not only this game, but the Finals so far, are Draymond Green and Jordan Poole. Draymond Green finished the game with two points, four rebounds, and three assists. Draymond would foul out of the game in the fourth quarter, the second time in three games. The former Defensive Player of the Year has been struggling as of late, finishing with nine points in Game 2 and four points in Game 1. He may not be known for his scoring, but Green has been off on the offensive end of the court. Green has been a key irritant for Boston getting the Celtics to commit fouls and riling the crowd up. The same can be said for the Boston crowd getting under Green’s skin leading to his recent lackluster play. Heading into Game 4, Draymond has 15 points and 15 fouls. Being outplayed by both Al Horford and Robert Williams, Green has almost been played off the court at times throughout the Finals.

In addition to Green, Jordan Poole has struggled in the postseason and Finals after having a great regular season. On Wednesday night, Poole finished with 10 points, shooting 1-of-4 from three and having three turnovers. Poole previously finished with nine points in Game 1 and 17 points in Game 2. Throughout the postseason, Poole’s play has fluctuated. The young guard averaged 21.0 PPG in the first round against the Nuggets, 17.8 PPG in the second against the Timberwolves, and 16.4 PPG in the Conference Finals against the Mavericks. He is currently averaging 12.0 PPG in the finals. Poole’s playing time has also started to take a slight dip. He has been a key for the Warriors this season, especially when Steph was out, averaging 18.5 PPG, shooting over 35% from three.

Game 4 takes place on Friday night in Boston, with the Celtics looking to take a 3-1 series lead before heading back to San Francisco for Game 5 on Monday, June 13th. Draymond Green and Jordan Poole will both need to step up for the Warriors to head for Game 5 with the series tied. The key for Draymond Green stepping up in Game 4 is being more aggressive in trying to score. Green has not been too aggressive when trying to score in the finals so far, something that has led to his recent lackluster play. In addition, he cannot let the Boston crowd get under his skin, something that has led to fouling out twice in the Finals. Green is known for being the heart and soul of the Warriors but his emotions on the court have been getting the best of him. For Poole, he needs to play inside of the three-point line. While he did not struggle from three in Game 2, he’s 2-of-9 from three in Games 1 and 3. The Warriors need scoring from Poole as he is the key contributor off the bench when he does not start. If these two Warriors perform the same in Game 4 as they have been performing in the Finals thus far, Golden State may have their backs against the wall down 3-1 for Game 5 on Monday.