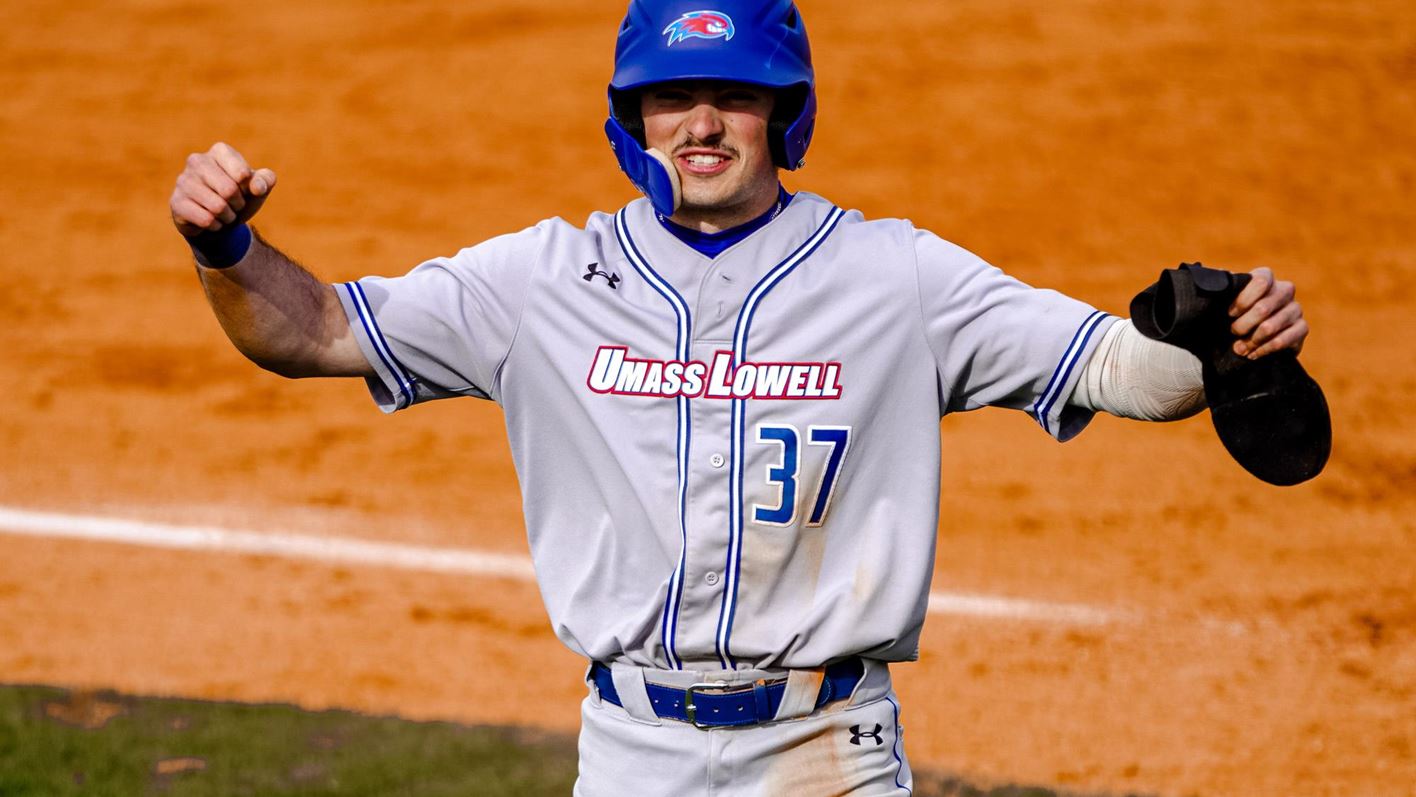 “We played really well in game two,” said head coach Ken Harring. “LJ [Keevan] was very good for again for us. Conditions were tough today. The guys regrouped after a poor performance in game one. We did have the winning run at the plate in the 9th, but made too many mistakes that put us in a big hole.”

The Cougars got the bats going early on, building a 7-0 lead in the third inning. The River Hawks struggled to find an offensive rhythm and cut the lead. College of Charleston added to the lead, making it a 9-0 game heading into the sixth. Senior Gerry Siracusa (Kinnelon, N.J.) got on base with a single and would later score from an error, getting UMass Lowell on the board.

In the bottom of the eighth, the Cougars stretched the lead to 11-1 after a two-run home run. Needing to find a spark late, the River Hawks found it with the bases loaded. Several walks and defensive errors for the hosts allowed UMass Lowell to cut the lead to 11-3.

Siracusa doubled to right to bring in another run before freshman Brandon Fish (Londonderry, N.H.) singled to right, scoring two more to cut the lead to 11-6. After another run walked in with the bases loaded, sophomore Fritz Genther (Kingston, N.Y.) drove one into right to score another run. The River Hawks comeback effort fell short, and the Cougars held on to take game one of the doubleheader 11-8.

Freshman LJ Keeavn (Holden, Mass.) had another stellar showing on the mound for the River Hawks. The freshman improved to 2-1 on the year, striking out seven and allowing just one earned run in 6.0 innings.

“The guys showed character in the second game. We are looking forward to finishing our trip tomorrow on a positive note.”

The River Hawks’ offense picked up right where they left off in game two when junior Matt Tobin (Poland, N.Y.) hit a triple to right field to get things going in the second inning. UMass Lowell got on the board in the third, when Siracusa doubled to right to bring in senior Robert Gallagher (Mullica Hill, N.J.) to open the scoring. Fish then singled to right to bring in Siracusa for a 2-0 lead.

UMass Lowell built a 6-1 lead heading into the sixth behind the offensive efforts from Siracusa, Fish, and Genther. Keevan continued to pitch well and shut out the hosts. The River Hawks opened the floodgates in the sixth inning with Gallagher advancing to third on a wild pitch after stealing second. Gallagher scored on another wild pitch before Siracusa grounded out to short to bring in freshman Jacob Humphrey (Standish, Maine) for an 8-1 lead. The River Hawks continued to pile on the runs, adding five more at the end of the inning for a 13-1 lead.

LJ Keevan exited the game to start the seventh, finishing the day with seven strikeouts. Junior Brian Gaughan (Walpole, Mass.) came in to close the game for UMass Lowell. The Cougars added three runs off a home run in the bottom of the seventh, but still held a big lead.

Gaughan pitched two scoreless innings to close things out and earned the save for the River Hawks. Two more walks with the bases loaded put UMass Lowell ahead 15-4 in the top of the ninth. The Cougars added one more in the bottom half of the inning, but the River Hawks took game two 15-5 to even the weekend series.

The series finale is set for 1 p.m. on Sunday, March 13 at the Patriots Point Athletics Complex.