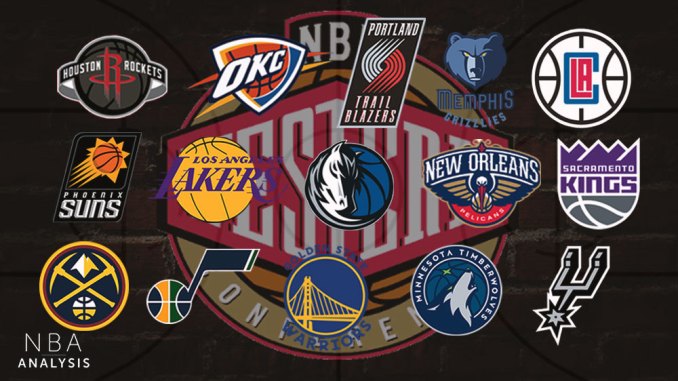 A dynasty returns to the top. Big injuries hamper championship hopeful teams.  A young superstar on the rise looks to take his team towards the top. Three weeks into the NBA season, the Western Conference is open. The question is, just how open is the West right now? At the top of the Western Conference is a team that has dominated the conference for the majority of the last decade: the Golden State Warriors.

After missing the NBA playoffs for two straight years, Golden State hopes to finish the season atop the West. Steph Curry has looked like an MVP in the 10 games the team has played so far. In addition to Curry, Andrew Wiggins has shown flashes. The team has had several surprises in the form of Jordan Poole and Gary Payton II. While Poole has dropped off from how he looked in the pre-season, he has improved and could be a contender for most improved. Payton has had a defensive presence for Golden State, being a key defender towards the end of games. The Warriors still have Draymond Green who is averaging over 8.0 rebounds and 7.0 assists. The team has seen help from all over and still hasn’t gotten Klay Thompson back. If the Warriors continue to dominate how they are right now, there is no doubt that they will be heading to the NBA Western Conference Finals with the odds in their favor.

In the second seed sits the Utah Jazz. Last season, the team finished first overall in the league with over 50 wins. Donavan Mitchell continues to be an underrated superstar in the NBA alongside multiple-time Defensive Player of the Year Rudy Gobert. The team has plenty of help from players such as Mike Conley, Jordan Clarkson, and Bojan Bogdanovic. The team has had impressive wins over Atlanta (twice), Oklahoma City, Houston, and Milwaukee. While the players have been performing and the team has been winning, the question is the same as the last few seasons: are the Jazz a true playoff team or just a good regular season team? The team lost to the Clippers in the second round of the NBA playoffs last season and lost to the Nuggets in the first round the post-season before. While the team’s record is good, they still have to prove themselves in the playoffs.

The Suns and Mavericks currently hold the third and fourth seeds. The Suns had an impressive win over Portland, with Frank Kaminsky leading all Suns players with 31 points. With the Suns reaching the NBA Finals last year, the team expects to compete for a championship again this year. Devin Booker averages almost 24.0 PPG while CP3 averages a double-double and there is no doubt the team will remain in the upper tier of the conference. The team has several problems though that could affect them all season. With the team not extending Deandre Ayton, there is a question of how Ayton will perform all season. The bigger problem the team has is off the court with ownership, something that is sure to affect the team.

With the Mavs, everything depends on Luka Doncic. Luka is looking like an MVP while the team is struggling to find out who is the second man on the team. The team just lost to the Bulls but was on a three-win streak prior. If Dallas can determine their number 2 option, they could stay in the upper tier of the West. With rumors of a player like John Wall not suiting up for the Rockets this season, trading for Wall could make Dallas a serious threat come playoff time.

In the final four playoff seeds of the West sits Denver, both L.A. teams, and Memphis. Three of these teams have significant injuries hampering the teams. The Lakers are currently missing LeBron James, the Clippers are missing Kawhi, and the Nuggets are missing Jamal Murray. With LeBron out, Anthony Davis and Russell Westbrook have been picking up the slack, averaging 23.9 PPG and 18.8 PPG respectively. Carmelo Anthony has been a surprise for the Lakers, looking rejuvenated while averaging over 17.5 PPG. Other than the four mentioned, almost all other players are averaging under 10.0 PPG. While the team has had solid wins over Houston, Charlotte San Antonio, and Memphis, the Lakers have also had two shocking losses to Oklahoma City, falling apart in the 4th Quarter. No matter where the Lakers finish this season, they will be in the championship conversation. Compared to the last few seasons, the Lakers have serious competition while they try to get a mostly new team to play together. While they don’t want to face a playoff exit similar to last year, any seed could be serious competition.

Looking at the other L.A. team, the Clippers are depending on Paul George until Kawhi Leonard returns. George is averaging MVP-like numbers while the other starters are providing help. Depending on Leonard’s return, the Clippers could be a dark-horse NBA contender. In the Western Conference Finals without Leonard, the George-led Clippers took the Suns to six games. While there is no argument that George can lead a team, he will need a healthy Leonard if he wants to win a ring.

Looking at Denver, there are several positives and negatives. The first positive is that Nikola Jokic is still performing like an MVP. He is currently averaging a double-double while being an underrated contender for MVP this year. Another positive for Denver is that Jamal Murray is closer to returning. One big negative for the team right now is Michael Porter Jr. After receiving a max contract over the summer worth over $200 Million, he has not performed up to the standard. What makes things worse is that he is currently out with a back injury. Looking at others on the team, Will Barton, Aaron Gordon, and Monte Morris are the only other players averaging over 10.0 PPG. As the season carries on, Denver might have to look to Murray to play similar to how he did in the bubble if they want to be a serious contender.

Looking at the eighth seed, Memphis has been quite surprising this season. Ja Morant has been on another level this season. He has looked like an MVP and a superstar. In addition, Desmond Bane and Jaren Jackson Jr. have been helping in the scoring department. So far this season, Memphis has had solid wins over Denver, Golden State, and Cleveland. While youth and inexperience will be what holds Memphis back come playoff time, Morant has the ability to will his team as far as he can.