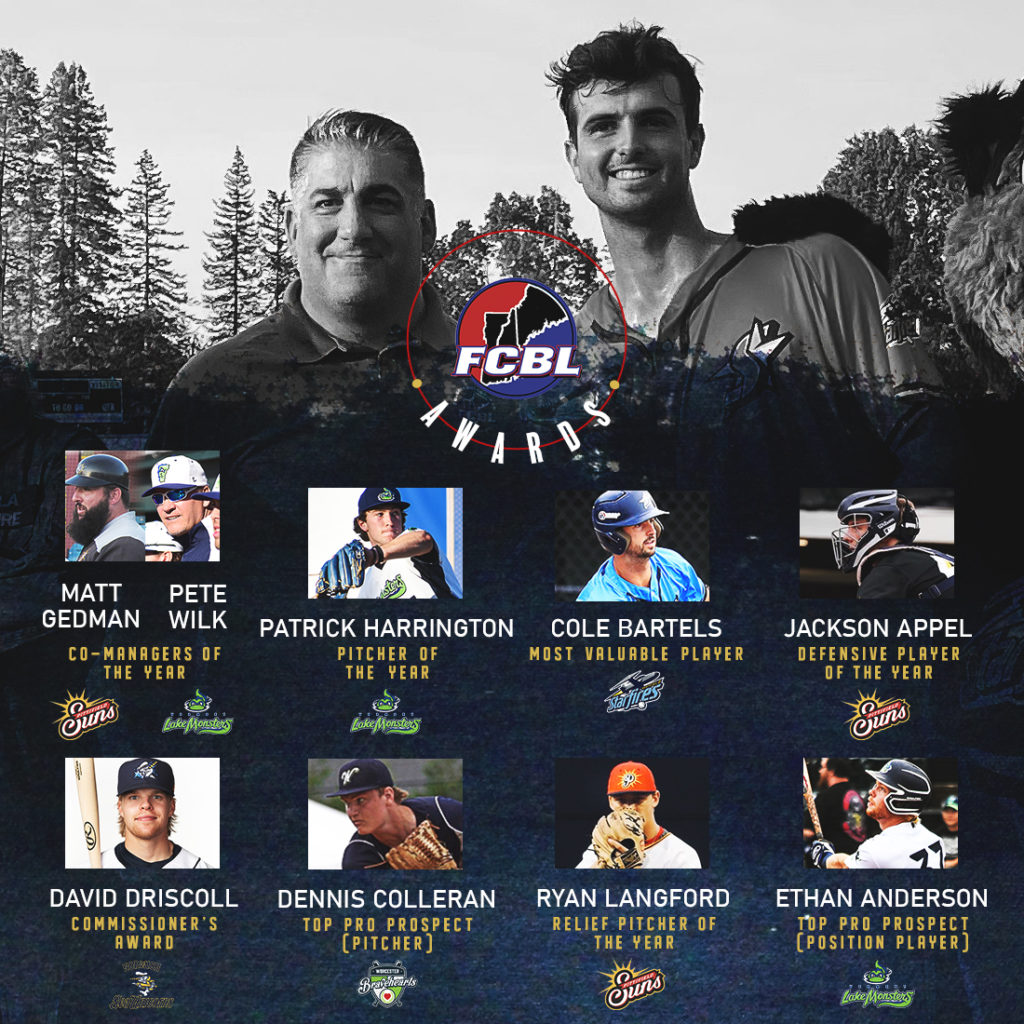 WEYMOUTH, Mass. (August 23, 2021) — The Futures Collegiate Baseball League (FCBL) has announced its major award recipients for the 2021 season, which ended last Friday with the Vermont Lake Monsters beating the Pittsfield Suns in a three-game series to win the league championship.

Following a vote of the league’s eight field managers earlier this month, Commissioner Joe Paolucci announced the winners and presented the awards during the final week of the summer season. Finalists for Most Valuable Player and Pitcher of the Year were recognized prior to these selections.

Below is a complete list of award winners. In addition, the All-FCBL First and Second Teams will be announced in the coming days.

The native of Belmont, Mass., made the most of a summer-long return to his home state as he led the FCBL with a .389 average, 65 hits, 43 runs scored, and 98 total bases. He legged out 21 extra-base hits and also topped the circuit in both slugging (.587) and on-base percentage (.505) while recording more walks (32) than strikeouts (29). The 2021 All-Star Home Run Derby winner, Bartels edged out Brockton’s Michael Golankiewicz (Merrimack) to win the first-ever MVP honor for a Starfire by hitting .438 over the final 10 games of the season after posting a .426 average during the season-opening month of June.

PITCHER OF THE YEAR

Harrington was a workhorse for the title-winning Lake Monsters as he went 5-2 with a league-leading 2.32 ERA and ranked second with 71 strikeouts in 62 innings. Opponents hit just .200 against the Bedford, N.H., native who worked four scoreless appearances and struck out at least eight batters on four occasions during the regular season. His five-game win streak to end the summer included two playoff series-clinching victories over which he allowed just two earned runs in 11 frames. Now a two-time FCBL champion, he also started the deciding third game of the 2020 title run for the Nashua Silver Knights.

RELIEF PITCHER OF THE YEAR

A two-time FCBL All-Star who also pitched for Pittsfield back in 2019, Langford went 1-1 with a 2.27 ERA and 56 strikeouts in just 31.2 innings during the regular season. He ranked second in the league in both saves (8) and appearances (24). After allowing two earned runs in his first two outings, Langford put together a streak of 20 consecutive scoreless innings from June 9 through July 16, capped with a seven-strikeout performance in 2.2 frames at Vermont. In total, Nineteen of the righty’s 24 appearances were scoreless including each of the last four entering the playoffs. Langford didn’t allow an earned run across six postseason innings.

DEFENSIVE PLAYER OF THE YEAR

The first catcher to ever win the FCBL Defensive Player of the Year honor, Appel was rewarded for strong work with a Pittsfield pitching staff that allowed the second-fewest runs in the league this season. He caught six potential base stealers and committed just one error in 156 total chances, recording a league-high 147 putouts and eight assists. Appel also contributed to two double plays and was charged with just two passed balls. The switch hitter was as productive at the plate as he was behind it, posting a .345 average with 11 doubles, 22 RBI, and 25 runs scored in 33 games.

Playing in 29 games, Anderson remarkably piled up all of his five home runs and 32 RBI during the second half of the season before departing for his freshman year at Virginia. The switch-hitting catcher saw his league-best 17-game hit streak (including 10 multi-hit efforts) come to an end on Aug. 7, but he left the eventual champions with a team-best .427 average and 1.189 OPS. Anderson, who has turned in a pair of five-RBI games during his outstanding summer, was the lone rising freshman among the league’s Most Valuable Player finalists.

The Northeastern-bound Colleran proved to be an important addition to the Worcester bullpen as he joined the team following his senior year at North Attleboro (Mass.) High School, going 2-0 with two saves, a 1.11 ERA, and 37 strikeouts in 24.1 innings. Colleran didn’t allow an earned run in any of his 11 relief appearances during the regular season, starting his stint as a Braveheart with a perfect ERA through six games before striking out nine Brockton batters across a five-inning start on July 25.

CO-MANAGERS OF THE YEAR

Following a 21-year head coaching career at Georgetown, Wilk joined the Lake Monsters as manager for their inaugural FCBL season and led them to a 42-24 record-setting the league’s single-season record for wins — before capturing the regular-season and playoff championships. After starting the season 12-18, Wilk’s club went on a 14-game win streak that started a 23-2 July and 30-6 stretch entering the playoffs. The Lake Monsters, who featured Pitcher of the Year Patrick Harrington and Top Pro Prospect Ethan Anderson, went 4-1 in the postseason.

In his fourth season as manager, Gedman helped the Suns to their highest FCBL finish and also led them on the longest postseason run in franchise history. Pittsfield’s 38-25 record was good for second place and included the lowest loss total since a 27-25 season back in 2012. During the postseason, Gedman’s Suns beat Brockton in the semifinals before falling to Vermont in another three-game set for the title. The Suns were consistent statistically, scoring the second-most runs in the league and allowing the second-fewest.

The Commissioner’s Award is given annually to a player for his commitment to his team, the Futures League, and the game of baseball. A rising junior at Williams College and Boston College High School graduate, Driscoll is a person of high moral character and has worked extremely hard this season through injuries to be a great teammate for the Sea Unicorns, one of the league’s two new organizations in 2021. Commissioner Paolucci is proud to have Driscoll be part of the Futures League and to help continue to grow the league.