BALTIMORE- The AFC North’s top two teams are about to settle the debate about which team will win the division crown. Ok, it’s way too early to tell which NFL team will ultimately win the AFC North but fans, reporters, and both teams will be a step closer to that answer. The Cleveland Browns aren’t in on that conversation just yet.

There are several other games to watch and the Dallas Cowboys vs. Philadelphia Eagles gets a deserved honorable mention for good reason. This game will actually be a much higher quality game than most expect.

Game of the Week

When two elite defenses are in the position to decide the outcome of the final score, that gets every old school football fan excited. Although there could be a lot of points in this game, the realistic expectation is this will be a low scoring game. The defenses will take over.

Lamar Jackson is enjoying a relatively good season as not always typical with any Madden cover athlete. Steelers quarterback Ben Roethlisberger is also having a great season and that is a reason Pittsburgh is still on top of the division. The fact that he hasn’t suffered a major injury this season keeps the Steelers energized and confident heading into each game.

The Ravens defense now has both former Jacksonville Jaguars, Yannick Ngakoue and Calais Campbell. It will be exciting to see what Ngakoue does in his Ravens debut in the biggest game of the year for Baltimore. Ngakoue was traded from the Jacksonville Jaguars to the Minnesota Vikings before the trade to Baltimore. The Steelers offensive line faces a tough challenge against both defensive ends, rookie linebacker out of LSU Patrick Queen, defensive tackle Michael Pierce and another juggernaut defensive end Derek Wolfe. This looks like a no-win scenario for the Steelers.

However, the Steelers defeated the formerly undefeated Tennessee Titans 27-24 so Pittsburgh can challenge every team.

When two teams with two wins face off on week eight, it’s never exciting football! However, it’s time to take that mentality and toss it to the side. This is going to be a vital game that will play a pivotal role in deciding the outcome of the NFC East.

Things aren’t going well for Dallas. The defense isn’t on track yet but there are too many great playmakers for that to continue. Expect the Cowboys to adjust and get back on track. Dallas lost Dak Prescott for the season and Andy Dalton was also injured. Dallas will start rookie Ben DiNucci out of James Madison.

Who is DiNucci? Why should anyone get excited about a third string, rookie quarterback? This guy hasn’t started any NFL games and we know next to nothing about him!

There is an easy way to answer that. The game film on DiNucci looks every bit as good as the tape on 2021 NFL draft prospect Trey Lance. Does that sound like a bold take? It is but watch the film before making any snap judgements. DiNucci is the real deal and it shouldn’t shock anyone when the Dallas Cowboys win in an upset.

Should fans still give the Browns credit for a stellar season or should everyone give into despair because of the Odell Beckham injury? Forget the negativity, the Browns can still dominate defenses with Jarvis Landry, Rashard Higgins, the rookie receiver out of Michigan Donovan Peoples-Jones, running back Kareem Hunt and Tight End David Njoku. Peoples-Jones delivered the final score against the Cincinnati Bengals in week seven so the Browns know they have a draft steal with his athleticism and leaping ability. His sideline footwork is also clearly NFL level as displayed on the final touchdown. Tight End Austin Hooper will be out for his second consecutive game as he heals from Appendicitis surgery.

The Raiders offense will challenge the Browns struggling pass defense. Derek Carr, Darren Waller and Henry Ruggs III will all have great performances. Running back Josh Jacobs might struggle as the Browns showed improvement in run stopping.

The Saints are getting back on track and Chicago continues to be the best surprise of the NFC this season. Super Bowl winner Nick Foles is clearly the quarterback Chicago needs and he has the golden chance to enhance his already strong reputation.

Will Drew Brees show his Super Bowl form in this tough matchup? This will be a really exciting game. 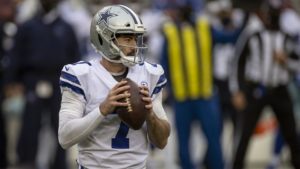