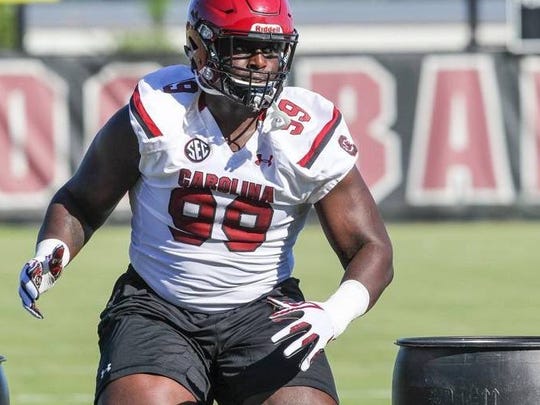 The story of Javon Kinlaw is the most intriguing of the 2020 NFL draft. Kinlaw will go from being homeless to a first-round draft projection in the 2020 NFL Draft. He can make anyone believe in beating the odds whether it’s a football game or surviving harsh or unlivable conditions. What does Kinlaw bring to the table?

The first thing that jumps out is his can-do attitude. Anyone who can go from homeless to an obvious first-round pick clearly has great character and personality. He is a defensive tackle who just won’t quit at anything. Kinlaw is 6′ 6′ tall and 310 pounds. Now, before everyone assumes he is a big guy that can’t move, take a good look at the game film. Kinlaw has obvious quickness and has an explosive burst off of the line of scrimmage.

He can get to quarterbacks within three seconds. He can easily push past offensive lineman with his strength. This man is a machine and should record a lot of sacks in the NFL. There is no doubt it. He recorded six sacks in 2019.

Kinlaw is a master of block shedding which gives him added draft value.  He possesses excellent pass-rushing technique. Kinlaw needs to make tackles right away so he doesn’t have to make chase down tackles.  His ability to make chase down tackles isn’t there yet so coaches need to work with him on that. He doesn’t possess the strip-sack skill that Auburn’s Derrick Brown has. Coaches also need to help him develop that strip-sack skill so Kinlaw can be more effective. He isn’t as electrifying as Brown but he is a very effective pass rusher. He is also an effective tackler as he recorded 31 tackles last season.

My Draft Projection: Early to middle first round, top 15 pick.