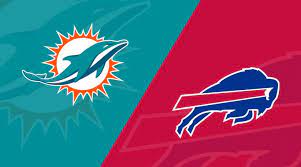 MIAMI – Week three of the NFL started out with a really outstanding game between the Browns and Steelers in Cleveland. Looking ahead after Cleveland’s major win, we have another vital division game to look forward to in the AFC East. The Miami Dolphins will take on the juggernaut Buffalo Bills two weeks after Buffalo win over the defending Super Bowl Champions Los Angeles Rams.

However, Buffalo takes on the league’s best passing offense through the first two weeks. Dolphin’s quarterback Tua Tagovailoa is number one in the league in passing yards (739), tied for first in passing touchdowns (7), and boasts the second-best quarterback rating in the league with 85.6. Former Kansas City Chief’s star receiver Tyreek Hill is a big reason Tagovailoa is off to a hot start. Hill is number four in receptions (19), number one in receiving yards (284), and number seven in receiving touchdowns (2). Even as good as the Bills’ defense is, it’s hard to believe they will contain or even slow down the Dolphins “track meet” offense. It’s not just Hill that should concern the Bills defense. Jaylen Waddle is posting big numbers too. Waddle is seventh in the league in receptions (15), third in receiving yards (240), and second in touchdowns (3).

Miami’s defense faces a problem too. Bills quarterback Josh Allen is among the best in the league. Receivers Stephon Diggs and Gabriel Davis are among the top route runners in the NFL. These two receivers will almost certainly gain at least 2,000 receiving yards combined.

Will the Bills defense give the Dolphins fits or will Miami’s high-flying offense win the game again?

It’s more likely that despite the fact that the Bills are playing at such a high level again, the up-and-coming Dolphins will emerge victorious at home. The Dolphins trade with the Chiefs is clearly paying off in a huge way. The Dolphins are in win-now mode and this is a big “prove it” moment for this team. The Bills will play very tough and neither team will have a big lead at any point in this game.

The Chargers lost a tough game against the Chiefs in week two so it’s time for Los Angeles AFC team to go out and do big things. However, Los Angeles faces the current AFC South leader, the Jacksonville Jaguars. That is not a typo! The Jaguars are number one in the division with a 1-1 record. Will Trevor Lawrence ball out or will the Chargers defense pressure him and force him to make quick decisions? This is a true test to see if Jacksonville is ready to take the next step to become AFC South Champions. A win here and suddenly everyone in the NFL should look at the Jaguars differently since they will earn a lot of respect.

Tom Brady vs Aaron Rodgers! Who will win this time? Tampa Bay is off to a hot start while Green Bay looks for answers on how to be consistent without DeVante Adams. Will Green Bay’s receivers step up this time? Will the Packers defense stop the GOAT in his tracks? Will the Buccaneers miss their red zone threat Mike Evans who usually has his way with two or more receiving touchdowns? Tom Brady will likely find a way to get his other receivers involved since Evans will miss the game due to his one-game suspension. This looks to be a toss-up.