Fantasy baseball is really at its hardest in the early months. You don’t know what you’re going to get from most of the guys in the league. Some dudes are ice-cold to start out the season and some are having the best month of baseball they’ll ever have. It’s difficult but I’ve picked out some guys you should be interested in rostering for your fantasy baseball team.

The MLB vet is mashing the ball with 13 RBIs just this month. The 35-year-old journeyman is extending the career renaissance he’s been experiencing these last few years in SF but he hasn’t hit the ball that well (.239 average) so far. He’s bound to start putting the bat to the ball more though but what catches my attention is the walk numbers. While Ruf has always been one to work the count, his top 4 ranking in walks this season truly came out of left field. Speaking of left field, an added benefit Ruf has versatility as a player eligible for both 1B and OF. It is worth noting that he’s significantly better against right-handed pitchers so you obviously should not be going to start him every day. The good thing is, as a bench piece Ruf doesn’t need to start every day so pick him up if a platoon piece sounds appealing to you.

Top 20 prospect Nolan Gorman quickly proved this year that he’s too good to still be in the minors. He started out the first two months of the season hitting above .300 with 15 home runs for the Cardinals AAA affiliate Memphis team. The cardinals promptly brought him up earlier this week and he’s been holding form. As a rookie, he obviously doesn’t have much of an MLB track record to show for it. Though, in the past 5 games, he’s hit .385 with an 8+ roto game already under his belt. Fantasy players are lucky to have this recent week’s showings to prove how immediately good Nolan Gorman can be. Many may be worried that this is simply just a repeat of the Royce Lewis situation where Gorman would be ousted once the opening-day 2B comes back but that shouldn’t be too big a worry. No offense to Paul DeJong but he is no Carlos Correa and it does seem that Gorman already has the spot next to Tommy Edman at 2B.

Fallers to trade for

After starting the year with an oblique injury, and a recent leg injury that’s cost him starts, Moncada hasn’t been able to get back into a groove. Starting the season with an average in the .100s is never a good sign but Moncada is inevitably going to play better. It’s only a matter of being patient and waiting until he’s at a genuine 100%. Of course, a lot of fantasy owners are just the opposite of that and could be looking to give off Moncada. He’s had his struggles in the past but you should not assume he’s back in that rut. Ever since that abysmal 2018 season where he set the all-time SO record (as a batter), he’s been playing tremendously. Put in an offer for the uber-talented Moncada and see what happens. 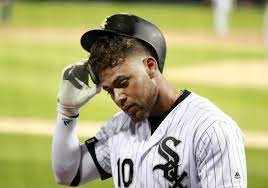 It’s no secret that Tyler O’Neill has been one of the biggest disappointments in fantasy baseball this year. Hitting at .195 with a -0.5 WAR was not what fans expected after last year’s top-10 MVP finish. I wouldn’t worry about O’Neill’s slow start, and Tyler O’Neill is definitely not worrying either. After being sent to the 10-day IL after a hand injury, Tyler O’Neill’s value has plummeted. That plunge in value allows you to perform a true fantasy baseball heist. Your friend who has Tyler O’Neill is likely going to hate you a month after you make the trade. But hey, I’m sure that we’ll all have a laugh about it at the end.

These guys are below the 70% rostered rate?!

It should be obvious the ceiling that will Rowdy Tellez provides you. While he won’t do it consistently, he’s put up monster games of 8+ rotisserie points on several occurrences. Tellez has been a positive presence in fantasy in weeks so it’s odd that he is still available. Tellez is hitting well at .244, with 32 RBIs, and 134 OPS+. What’s more notable is that Tellez has jacked nine home runs this season. If your league is one of the 35% where Tellez is available, I advise you to pounce on him quickly.

Luis Arraez can just straight-up hit (.354 AVG, 166 OPS+) and the guy plain doesn’t strike out (6.7% SO rate!). Not only that, he’s eligible for four positions (1B, 2B, 3B, OF). It was to my surprise, and disappointment, that Arraez was still available in 32% of ESPN fantasy leagues. I picked up Arraez the first week and figured we’d all given him the Taylor Ward treatment. If he’s still on the wires at this point, I would trip over my feet running to get him on my team. Alongside Byron Buxton, Arraez will be the future of these Twins. PICK HIM UP NOW.

2018 Red Sox Alternate Universe: What Could Have Been

If Cespedes Can Get Paid, So Can Cornejo