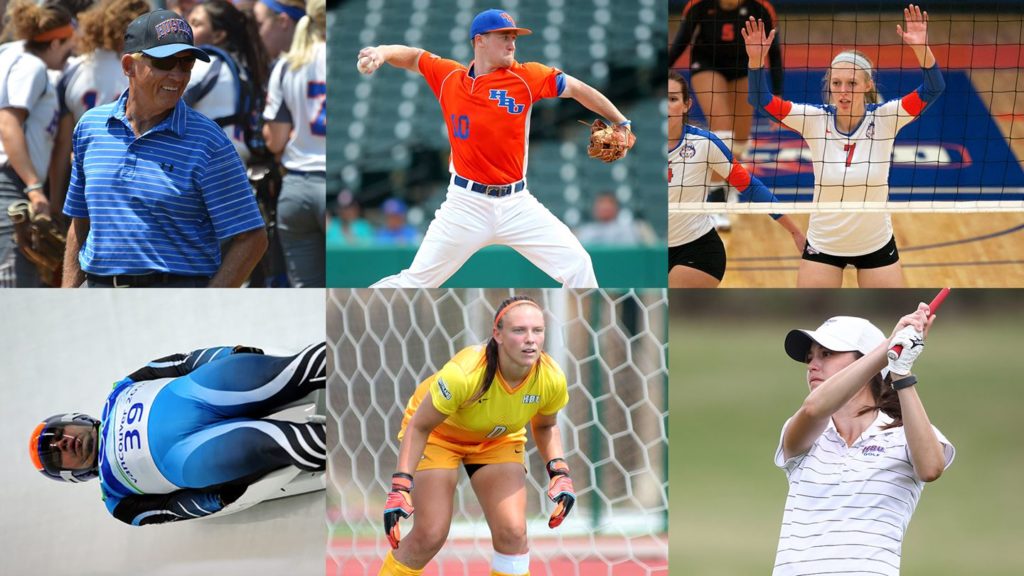 Willhite was the assistant softball coach at HBU and passed away on May 31 after recently completing his 27th season with the Huskies. In his final season, HBU advanced to the Southland Conference Tournament for the first time since 2014. Willhite helped the Huskies to nine Red River Athletic Conference Championships, nine NAIA national tournament appearances, and the 2011 Great West Conference championship. The National Fastpitch Coaches Association (NFCA) honored Willhite as the Assistant Coach of the Year in 2016 and he and head coach Mary-Ellen Hall were named the NFCA NAIA Coaching Staff of the Year in 1999 and 2005. Willhite also earned HBU’s Mayfield Staff Award in 2007. A native of Oklahoma, Willhite lettered in baseball and tennis at Del City High School, before attending Central State University and the University of Oklahoma. He joins his daughter and former softball player, Rachelle Willhite, who was inducted into the Hall of Honor in 2006.

Doerpinghaus was a 6-foot-4 middle blocker on the volleyball team in 2014 and 2015. She was a two-time All-Southland Conference second-team selection, was the Southland Conference Newcomer of the Year in 2014, made the Academic All-Conference Team in 2015, and was named to the Commissioner’s Honor Roll twice. Doerpinghaus earned CoSIDA Academic All-American in 2015, becoming the first HBU volleyball student-athlete to achieve the award. The Palo Alto, California, native had a career .311 attack percentage, 422 kills, and ranks 11th all-time with 282 total blocks. Her 1.22 blocks per set rank third in the HBU record book. Doerpinghaus also set the rally-scoring record with 14 blocks in a four-set match against McNeese on Oct. 23, 2014.

Gibson was a four-year letter winner on the women’s golf team from 2009 to 2012. The Carrollton, Texas, native helped lead the Huskies to three-straight Great West Conference championships in 2010, 2011, and 2012. Gibson was the GWC Player of the Year in 2012, the Newcomer of the Year in 2009, and was a four-time All-GWC First-Team selection. She also made the GWC All-Tournament Team every year, finishing third individually at the conference championship in 2012, eighth in 2011, tied for third in 2010, and tied for second in 2009. She recorded a 78.5 stroke average for her career, with 20 top-20 finishes, 15 top-10s, and 12 top-five showings.

Gonzalez was a member of the men’s soccer team from 1980-82 but really made his mark in the sports world competing in the luge from 1988 to 2010. He became the first athlete to participate in the Winter Olympic Games in four different decades – Calgary in 1988, Albertville in 1992, Salt Lake City in 2002, and Vancouver in 2010 at the age of 47. The Campana, Argentina, native has written six bestselling books, teaching universal success principles that apply in sports, business, and life, and have been translated into more than 10 languages. He has been a professional motivational keynote speaker since 2002, speaking to more than 100 Fortune 500 companies.

Jones was a pitcher and third baseman on the baseball team from 2012-15. The Cypress, Texas, native helped lead the Huskies to the Southland Conference championship in 2015 and the Great West Conference championship in 2013. Jones hurled a complete game shutout and was the designated hitter in HBU’s 6-0 victory over Sam Houston in the championship game of the 2015 Southland Conference Tournament to earn Tournament MVP honors. He earned all-tournament honors at third base in 2013, hitting .438 with five RBIs and going 2-for-5 in the Huskies’ win over Northern Colorado in the championship game. He was the Southland Conference Utility Player of the Year in 2014 and 2015 and was a third-team all-conference selection in 2015. For his career, Jones hit .316 and ranks second all-time with 269 hits, 10th with 122 runs, tied for 14th with 36 doubles, and is the all-time leader with 851 at-bats. On the mound, he is tied for sixth with 19 wins, posted a 4.19 ERA, is tied for sixth with two shutouts, tied for 15th with 51 appearances, and ranks seventh with 268.1 innings pitched. His 82 hits in 2014 are tied for 11th in a single season and he hit .361 with 22 RBIs and 33 runs during that campaign.

Walrath was a goalkeeper on the women’s soccer team from 2010-14. The Cypress, Texas, product led the Huskies to a conference title as the 2014 Southland Conference Tournament MVP, shutting out Stephen F. Austin, 2-0, in the championship match, and stopping Sam Houston on penalty kicks after double-overtime in the semifinal. In the Huskies’ first-ever NCAA Tournament appearance, she made 14 saves against fifth-ranked Texas A&M, which ranks third all-time in a single match. Walrath was an all-conference second-team selection as a senior and twice made the Commissioner’s Honor Roll. She is HBU’s all-time leader with a 0.97 goals-against average, ranks fourth with 18 wins, fourth with 189 saves, third with 11 shutouts, second with 5.25 saves per game, and second with an .840 save percentage. She also holds the record for saves in a single season with 121 in 2014 and the record for goals-against average at 0.57 in 2011. Her 6.05 saves per game and .846 save percentage in 2014 each rank third. Walrath currently serves as HBU’s Director of Ticketing, Marketing, and Promotions.

The HBU Athletic Executive Committee, which is comprised of nine senior staff members, including two former HBU student-athletes, votes on the nominees. The new nominating criteria adopted for 2021 can be found here. Click here to view previous classes.

The 2021 HBU Sports Hall of Honor Class will be honored at the football game and Spirit of HBU event on Saturday, Sept. 11.