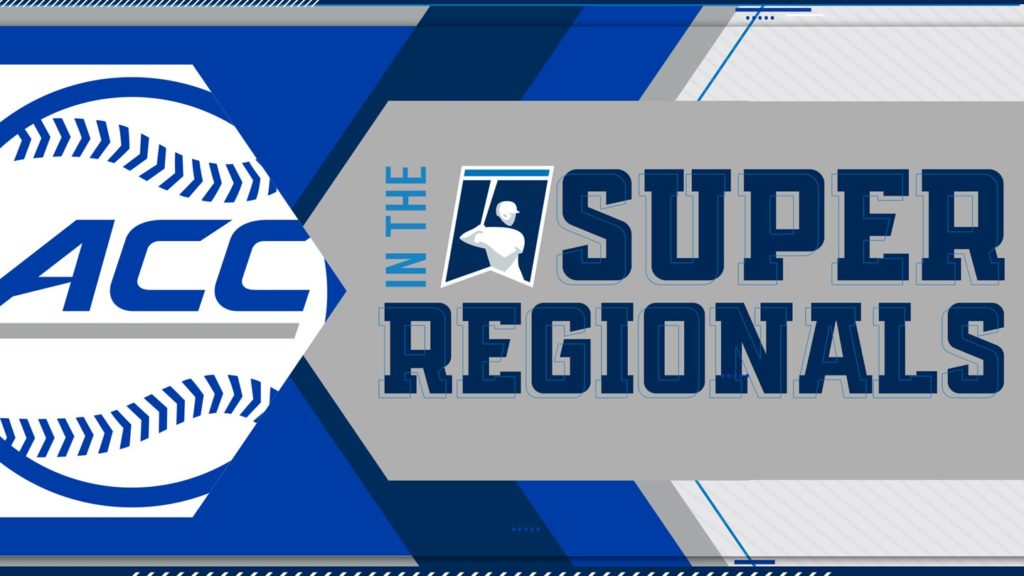 When the NCAA baseball tournament began, eight teams from the ACC were invited to participate. After a weekend plus of baseball, three emerged to continue to the Super Regionals. Notre Dame, North Carolina State, and Virginia made it through and are now one weekend away from making the trip to Omaha and playing for a National Championship. Here is a look at how they got there and what is ahead for each of them.

The Irish (33-11) unleashed an offensive attack they had not shown during the regular season. They steamrolled Central Michigan and UConn to sweep their regional last weekend. ND blasted 15 home runs in the three-day event. Power hitting Niko Kavadas set a program record with 21 home runs on the season. Over the weekend, all Niko did was blast five long balls, drive in 13 runs, and score nine times. His performance earned him Most Outstanding Player of the regional. The 26 runs against the Huskies on Saturday were a program record and the most runs scored in a tournament game since they posted 25 vs South Alabama in 2002. This will be Notre Dame’s first Super Regional appearance since 2002. The 10th seeded Irish will travel to take on #7 seed Mississippi State.

North Carolina State (33-17) also swept their regional over the weekend. Just like the Irish, the Wolfpack let their bats do the talking. NC State came into the regional as the top hitting team in the ACC. They hit for a team batting average of .382 with 30 runs. The 14 runs scored in Sunday’s clinching win over Louisiana Tech was not only a program record for most runs in an NCAA Regional, but it was also the third most in an NCAA Tournament game. Regional MVP, Devonte Brown had quite a weekend for himself. He drove in five during Sunday’s regional clinching win. In their first game vs Alabama on Friday, Brown went deep twice in an 8-1 win. This will be the fifth time the Wolfpack has advanced to the Super Regionals, the first time since 2013. NC State owns the best road winning percentages at .850 with a 17-3 record in the tournament. For the Wolfpack, they will be back on the road to face the #1 overall seed Arkansas Razorbacks.

The Virginia Cavaliers (33-24) had the most difficult road to the next round. That’s because after losing their opening round game to South Carolina, Virginia would need to win four straight elimination games to get the job done. Game number four was decided in extra innings against ODU. It would be a walk-off bomb by senior Devin Ortiz who started the game as the Virginia pitcher and went four innings. He would finish as the DH and come through big-time for his team. The walk-off was the first in Virginia’s postseason history and the first walk-off in eight years. Virginia’s pitching staff had their strikeout pitches working as they would punch out 39 for the regional including 24 on Sunday vs ODU. Virginia will head to the super’s for the seventh time and the first time since 2015. They will meet Dallas Baptist next. Ortiz was named Regional MVP by going 7-for-21 (.333) with two HR, a double, and six RBI.

By the end of the weekend, we will know if any of these ACC teams make it to Omaha.