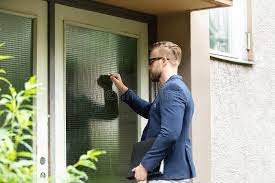 Coming out of last year’s crisis, America has entered a new normal and several new trends are picking up steam. Sportface has them all for you.

People are working from home permanently, the commercial real estate industry is having to overhaul its business model, and people are showing up uninvited and unwelcome at peoples’ houses in numbers never seen before.

The leader of the dropping in unannounced movement is Sammy Sportface.

“Sportface is the trailblazer and poster child of this disturbing national phenomenon,” said Sportface. “Over the past months, I’ve been knocking on doors of people I know who I haven’t seen in years, totally out of nowhere and with no good reason to be invading their lives. You wouldn’t believe the expressions on their faces when they see you on their front doorstep.

“It ranges from dismay to anger to fear and anxiety. I think this trend needs to grow five-fold over the next three months across America to see how much fun, spontaneity, acrimony, and family squabbles it can cause in countless peoples’ lives. Societal norms need to be shaken up.”

This obnoxious habit has become a common way of life for Sportface. Yesterday he crashed down on the house of Billy D. Williams Dankos in Bethany Beach, Delaware. Billy D. had no inkling whatsoever Sportface would show up at his door; he didn’t even know Sportface knew where his house was.

“I see Sportface and my first thought was fear that he might have lost his mind,” he said. “My second thought was ‘damn it, I was just finishing writing my daily assignment of writing ‘I hate Rudy for calling me Billy Dankos 100 times.’ Then Sportface shows up and blows up the rhythm of my daily routine I’ve done every day for the past 40 years since Rudy started calling me Dankos.”

Upon entering Billy D.’s living room, Sportface went right into his living room, asked for a cold mug of root beer with lots of ice, and started telling stories about Charlie Snake Leasure and hitting a 480-foot bomb off him in front of 17 Visitation girls sitting along the first baseline 40 years ago.

“The dude didn’t even ask me how I was doing or what I’ve been up to,” said Dankos. “He acted ruder than Rudy. I mean the Leasure story is a pretty good one but you would think Sportface would at least have some social etiquette and sense of how to enter someone else’s house uninvited without bragging about his high school sports glory days right out of the chute.”

The American Society of Social Etiquette (ASSE) has caught wind of this Sportface-led drop-in-uninvited trend and does not support it.

“There’s a reason people haven’t stopped in uninvited to other peoples’ houses,” said the ASSE spokesperson, Eddie Etiquette. “It’s poor form, improper, and rude. We have set in motion a national campaign to stop this Sportface cat from escalating this trend any faster or higher. It’s wrong on so many levels. This Sportface guy has got to be stopped.”

“Eddie Etiquette needs to lighten up,” said Sportface. “The truth is people like it when people show up announced and talk all about themselves. It’s entertaining and gives them something to gossip about with their friends. Everybody loves to gossip. Sportface is just giving people what they want. I see this trend getting bigger by the day.”

Over the next week, Sammy has on his calendar 11 drop-in-uninvited visits to peoples’ houses. Not one of those people knows he’s coming.